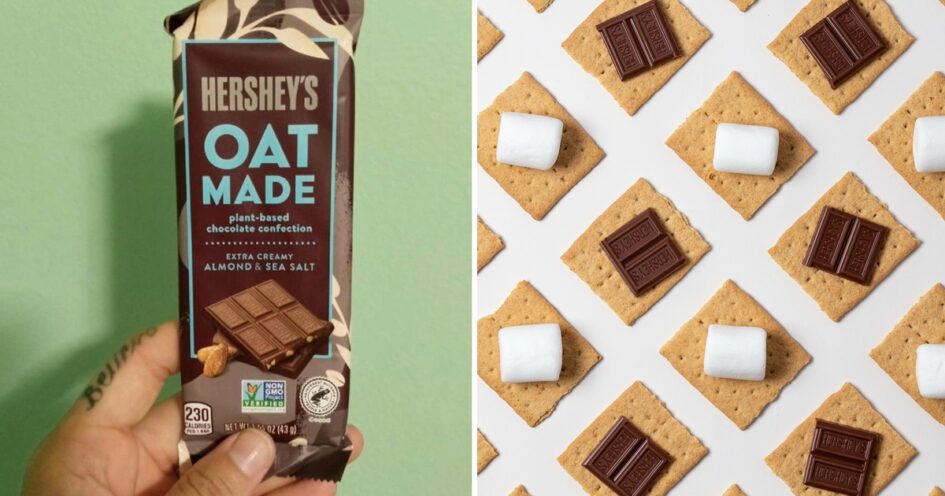 The Hershey Company’s first vegan chocolate bars will be made with a base of oat milk. The new line of Hershey’s Oat Made bars will come in flavors such as Classic Dark and Extra Creamy Almond & Sea Salt with each oat milk-based bar clearly labeled vegan. Currently, the bars are only available at Soul Miner’s Garden, a vegan food truck in Charlotte, North Carolina that was able to get an early batch after a happy accident. “We actually unexpectedly stumbled across these on the shelf at a big-box store here in Charlotte,” Soul Miner’s Garden Owner Sasha Quinn told VegNews. “They had no tag on the shelf but rang up normally at the register so we bought them.” Customers can order from the truck—which serves vegan comfort food such as nachos, reuben sandwiches, and burritos—and add on a vegan Hershey’s chocolate bar for dessert.

While Hershey’s has yet to confirm the release date of the bars, rumor has it that the Oat Made line might roll out to additional stores as early as September 5. VegNews has reached out to Hershey’s for more information about the launch of its vegan chocolate bars. In February, Hershey’s announced that it is working on expanding its “better for you” (BFY) options, including plant-based alternatives. The brand is currently working on a long-term strategy  to expand this category which includes innovation toward the BYF category of existing products, research and development of new products, licensing agreements to co-create products, and acquisition of brands that deliver BYF options.

Hershey’s first vegan chocolate bar is a welcome addition to its BFY category and its key ingredient, oat milk, is a better option than dairy in terms of human, animal, and planetary health. “We are the leader in US confection, and our consumers rely on us to understand their needs for everyday moments, seasons and special occasions, offering high-quality and great tasting candy that’s accessible for everyone,” Kristen Riggs, Chief Growth Officer at Hershey, said. “Expanding our expertise, building new capabilities, and delivering more choices in better-for-you confection is the next big category opportunity for us to lead.”

Are vegan KitKats coming to the US?

Outside of the US, KitKat is produced by Nestlé and a vegan version of the iconic candy bar  began making its way to store shelves earlier this year. Made from a combination of vegan chocolate and vegan wafer fingers, the new KitKat V was created by Nestlé’s research and development team in York, United Kingdom—where the original KitKat was first introduced in 1935. One of the first people to try the new vegan KitKat bar was plant-based celebrity Kim Kardashian, who received a personalized box of vegan “KimKat” bars in June. The KitKat V bars initially launched in the United Kingdom, followed by Estonia, Poland, Latvia, Lithuania, Brazil, and other regions—but not the US, unfortunately.

In the US, the KitKat brand is made by Hershey’s and VegNews has reached out to Hershey’s to inquire about its plans around a US launch of a vegan KitKat bar.