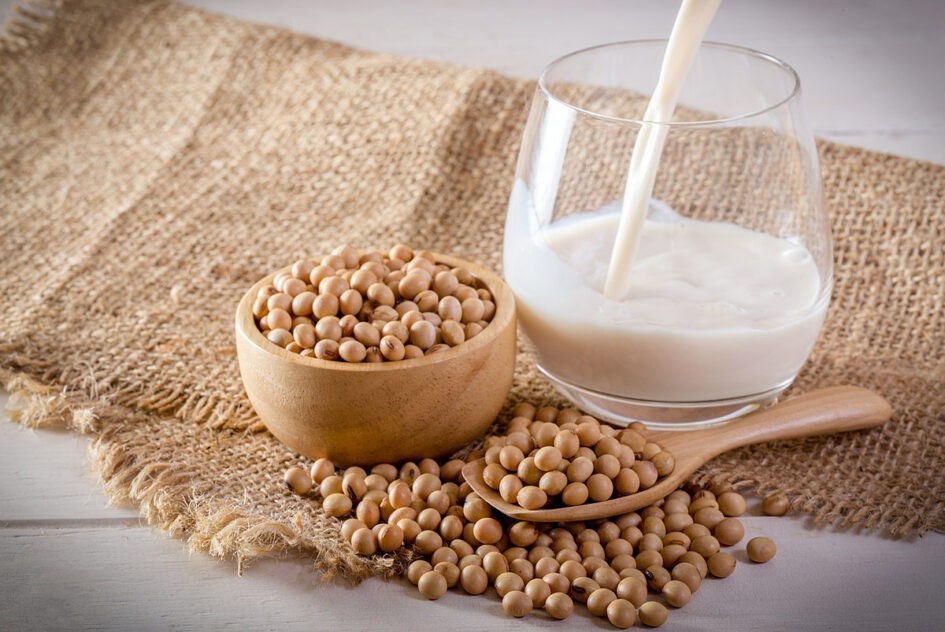 Are consumers right to shy away from soy milk or is soy protective, and not getting its due? Soy products have been misleadingly associated with a higher risk of cancer, especially breast cancer because soy contains isoflavones, a type of phytoestrogen. Phytoestrogens are natural plant compounds structurally similar to human estrogen, but thousands of times weaker.

These isoflavones are now believed to be “chemopreventive”  according to the latest epidemiological studies, as they bind with estrogen receptors in the body and block the uptake of animal estrogen, which in turn lowers the risk of cancer.

On the subject of misinformation and soy, the worry that soy produces “man boobs” has been well researched, and the only cases that are known happened where someone took extreme amounts of soy. Studies of children and men eating normal amounts of soy have shown no feminizing effects. Eating edamame or drinking soy milk is not the same as ingesting seven times the number of isoflavones in whole soy products.

Should we go back to eating soy? Research says it’s protective against cancer

These plant-estrogens can provide some protection in terms of breast health, according to Dr. Kristy Funk a board-certified breast cancer doctor, researcher, author, and speaker, who asserts that on a cellular level, phytoestrogens act more like estrogen blockers.

Recent studies have shown that higher soy consumption, especially early in life, is associated with an “approximate 30 percent reduction in the risk of developing breast cancer,” to quote one study. Meanwhile, soy consumption after a breast cancer diagnosis may prevent cancer recurrence, according to the analysis of 11,000 patients. The abstract claims epidemiological studies have shown that “postdiagnosis soy intake statistically significantly reduces recurrence and improves survival.”

In terms of heart health, isoflavones have been shown to reduce the risk of coronary heart disease by improving metabolic parameters, such as fasting blood sugar levels, blood lipids, and systolic blood pressure – key markers for cardiovascular health.

Soy is also known to be beneficial to heart health, and substituting soy protein for animal protein has been shown to help lower LDL cholesterol. High in protein and containing both monounsaturated fat and polyunsaturated fat, soy products have a lot to offer the plant-based consumer. In the ongoing debate about whether soy milk is good for you or whether there are serious health risks to consider, here’s what the latest research has to say.

Isoflavones in soy can help manage symptoms of perimenopause and menopause, according to research, and have been shown to have protective effects for bone health.

One small study that examined the effects of soy on hot flashes found that women following a plant-based diet that included ½ cup per day of cooked soybeans saw their hot flashes reduce by 79 percent, compared to only 49 percent in the control group.

What is soy milk and are there any health benefits to drinking it?

Soy milk as we know it derives from the milky substance produced during traditional tofu making.  In modern production methods, soy milk is made from whole soybeans or soy flour. The whole dry beans are soaked for several hours, ground into a pulp with added water, and then boiled and filtered to remove any fibrous residue. Commercial soy milk is usually sweetened or flavored and fortified with vitamins and minerals like vitamin D and calcium.

The nutrient profile of soy milk

Nutrition-wise, soy milk is a valuable source of plant protein, providing way more protein than its close rival, almond milk. This data is from the United States Department of Agriculture.

Where did the idea come from that soy milk is bad for you?

Fears around soy consumption stem from outdated associations between isoflavones and estrogen-dependent cancers. Animal studies from the 1940s and ’50s first highlighted links between soy and estrogen, and over the year rumors have persisted about soy foods being linked to hormonal cancers and gynecomastia – the overgrowth of male breast tissue commonly known as man-boobs.

“Soy has a relatively high concentration of certain hormones that are similar to human hormones and people got freaked out about that,” says Isaac Emery, a food sustainability expert, quoted in The Guardian. “But the reality is you would have to consume an impossibly large amount of soy milk and tofu for that to ever be a problem.”

Plus, results from animal studies don’t readily translate to humans. Newer human research clarifies the safety of isoflavones regarding hormonal cancers, such as breast, prostate, and ovarian, and as previously reported on The Beet, eating soy in its natural form does not in any way contribute to the development of male breasts.

As the plant-based cancer surgeon, Dr. Funk explains, the key to soy’s health benefits is to incorporate organic, non-GM whole soy foods into your diet rather than soy isolates and extracts.  As well as soy milk, other natural whole forms include:

One of the largest studies to demonstrate the safety and effectiveness of soy foods is the Shanghai Women’s Study.  The study aimed to evaluate the association of adolescent and adult soy food intake with breast cancer risk in 73,223 Chinese women.  The authors confidently concluded that women who consumed a high amount of soy foods consistently during adolescence and adulthood had a substantially reduced risk of breast cancer. There was also strong evidence of a protective effect of soy food intake against postmenopausal breast cancer.

Other concerns around soy have centered on its goitrogen content. Goitrogens are naturally occurring compounds that can inhibit thyroid function. Sources of goitrogens include:

However, goitrogens don’t pose as much of a threat to thyroid function as originally believed, and the compounds can be inactivated by cooking. Soymilk production involves high-temperature cooking, meaning goitrogens are inactivated and pose no risk.

A thorough technical review paper published earlier this year concludes that neither soy foods nor isoflavones can be classed as endocrine disruptors, and they do not adversely affect thyroid function. In addition, available evidence shows that no adverse effects have been seen on breast or endometrial tissue or estrogen levels in women, or testosterone or estrogen levels, or sperm or semen parameters in men.

Dairy cannot make the same claims, however.  As a study in the Journal of Epidemiology shows, that while there is no apparent connection between soymilk intake and breast cancer, dairy milk (both full-fat and reduced-fat) is associated with a higher risk of developing breast cancer.

The study tracked the dietary habits of 52,795 women in North America (average age of 57 years) for nearly 8 years and found the cancer risks among dairy milk drinkers were the same whether the women were pre- or post-menopausal. Dairy contains animal estrogen, passed from the lactating cow to our bodies.

Soy is better for the environment

Not only is soy packed with phytoestrogens and plant protein, but it is also more environmentally sustainable than almond milk.  Almond trees are thirsty, requiring more water than any other dairy alternative – 130 pints to produce one glass of almond milk. Around 80 percent of the world’s commercially grown almonds are grown on enormous mega-farms in California’s Central Valley where deepening droughts are threatening almond production.

(This is one reason that oats are gaining in popularity since they are much kinder to the environment and replenish nitrates to the soil so they don’t require as much land to grow.) Along with water demands, almond milk production is bad news for bees since almond trees rely on bees for pollination. Each year thousands of bees are drafted into the farms to pollinate the blossoms, with around one-third dying from pesticide exposure.

Soy scores higher for sustainability, so long as you opt for soy grown on organic farms in the US or Canada, thereby avoiding soybeans grown on land cleared in the Amazon rainforest.

How to make soy milk

Soy milk can easily be made at home from scratch with a pan and blender or by using a soymilk maker that takes care of all the soaking, blending, filtering, and cooking in one pot.

Once vilified, soy has been found to be heart-healthy, lower the risk of breast cancer and other hormonal cancers, and is also among the most environmentally sustainable dairy alternatives.

The phytoestrogens in soymilk help reduce the risk of breast cancer and cardiovascular disease and can help manage perimenopausal symptoms.

Read more on The Truth About Soy and How Much You Should Eat.