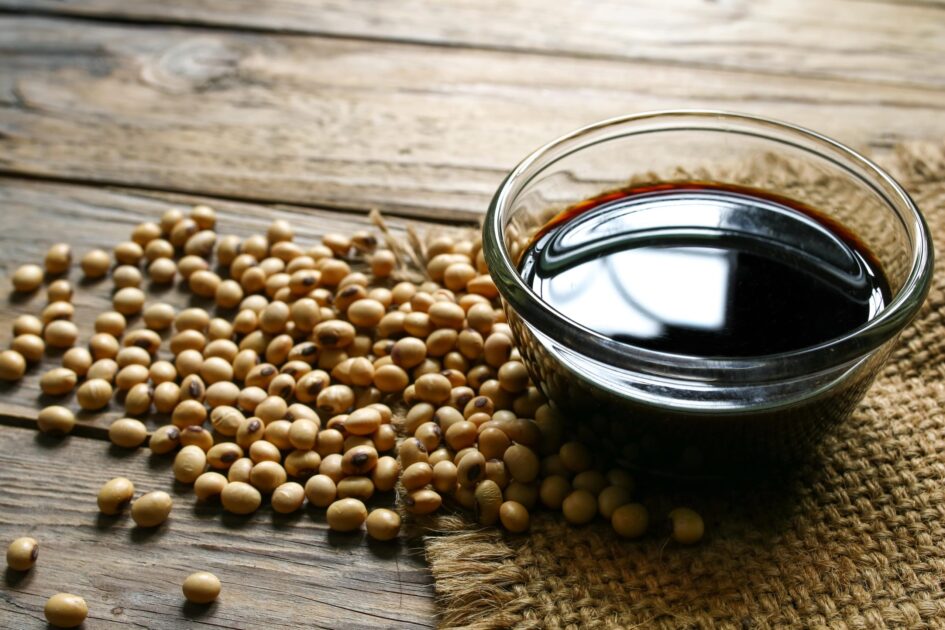 Soy sauce is a liquid condiment with a complex flavor profile: saltiness, umami, sweetness, and bitterness. It originated in East Asia and has been around in some form for over 2,000 years. Soy sauce comes in various (often regional) flavors. Still, the basic recipe has stayed virtually similar over the centuries: fermented soybeans, a grain (typically wheat), brine, and mold cultures of yeasts. While all of this is fascinating, plant-based soy sauce aficionados simply want to know, is soy sauce vegan? That’s the focus of this article.

What is soy sauce?

Soy sauce is a condiment that can be used as a dip (alone or in combination with other ingredients such as wasabi) or as a stand-alone ingredient (i.e., added directly to food to increase flavor either during or after cooking). Many people believe that paste-style antecedents of soy sauce (known as Jiang) were formed initially, with origins dating back more than 2,000 years or more. These antecedents employed fermented soybeans, but the liquid soy sauce we are acquainted with today was developed later. That was most likely between 540 and 960 AD, and by 1600, it had become the dominating kind of food.

Though soy sauce originated in China, it has been popular in many Asian nations and beyond over the years, with varieties such as Japanese tamari emerging. The Dutch East India Company is claimed to have imported soy sauce to Europe for the first time in the 17th century. Originally intended to preserve food, soy sauce is now more commonly used as a flavoring condiment and the main ingredient in many East Asian dishes. In truth, much of the soy sauce consumed in the United Kingdom is prepared in Japan or Japanese.

How Is Soy Sauce Made?

Soy sauce was traditionally created by fermenting a combination of soybeans, wheat (or other grains), and mold or yeast. Some soy sauce still undergoes the fermenting process nowadays. Still, most techniques apply a hydrolysis method (which is much faster and cheaper) to achieve a similar effect, though with less flavor depth. This method was invented in Japan in the 1920s, and products manufactured this way are frequently combined with a small amount of “real” soy sauce to enhance flavor.

There are five essential ingredients to soy sauce:

You guessed it, soy sauce is made from soybeans. The flavor of the sauce comes from the proteins in the soybeans after they’ve been fermented.

While tamari is wheat-free, most other soy sauces aren’t. The carbohydrates in the grain contribute to the condiment’s characteristic aroma, and wheat also adds sweetness to the finished product.

The following two elements, salt, and water are mixed together to make a brine, which is where the fermentation occurs. Salt’s preservation properties help keep microorganisms at bay as the soybeans ferment.

While not strictly speaking “ingredients,” fungal and bacterial cultures play a vital role in producing soy sauce. Aspergillus oryzae, sometimes known as koji, is a filamentous fungus spore that is extensively used in the process too.

As one might anticipate, there are various types of soy sauce available today. We only had three options in the West until recently. These were ordinary/regular soy sauce, light soy sauce, and dark soy sauce. Other varieties of soy sauce, such as Japanese versions like tamari, koikuchi, and usukuchi, are now available. 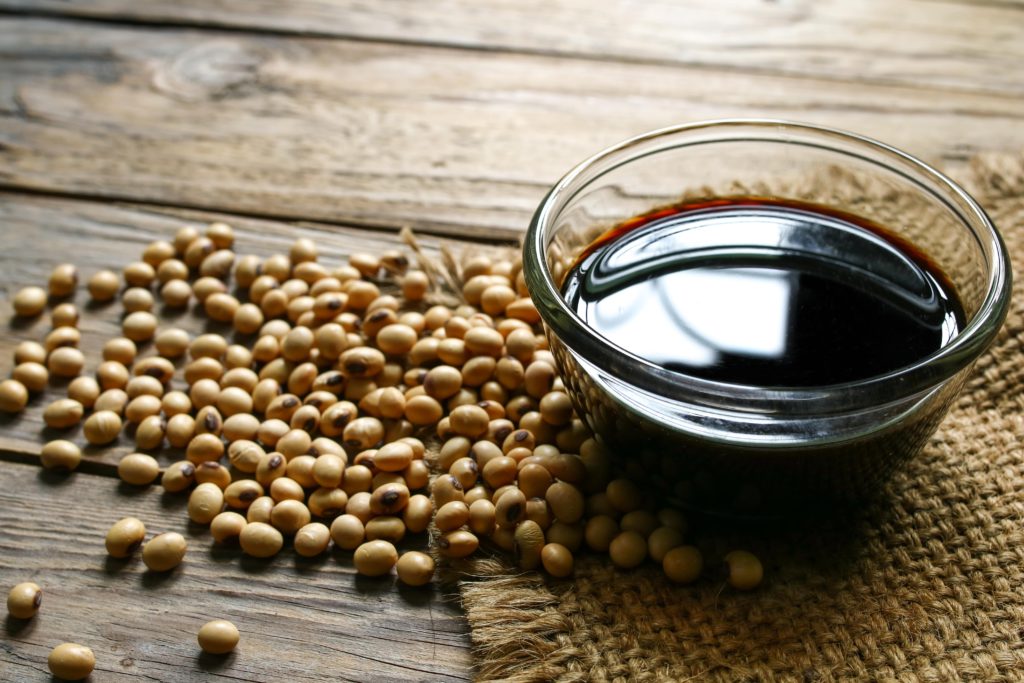 To begin, veganism is a diet that excludes all foods and products derived from animals. As a result, a vegan diet is mainly composed of plant-based products. Soy is a legume that grows on farms and might be considered vegan in this context. On the other hand, Soy sauce contains no ingredients that come from animals, making it a vegan dish.

Overall, suppose you stuck to high-quality, traditional soy sauce made with only the most basic ingredients and produced using traditional methods. In that case, you’ll get the best of both worlds: you’ll know it’s vegan-friendly, it’ll have incredible umami, sweet, salty depth of flavor, and it’ll be more likely to provide health benefits than drawbacks (assuming you keep an eye on your salt intake, that is).

The more components listed on the label, the more probable it is to contain items that are either bad for you or derived from animals, as is the case with many foods (as in the case of the E number mentioned above).

When it comes to soy sauce, less is more for ingredients, and choosing fermented over hydrolyzed options ensures that carcinogens aren’t present. Whether you’re using soy sauce to accompany a stir-fry or fried rice meal or as a dip for vegan-friendly gyoza or edamame beans, it’s essential to pick a good brand. 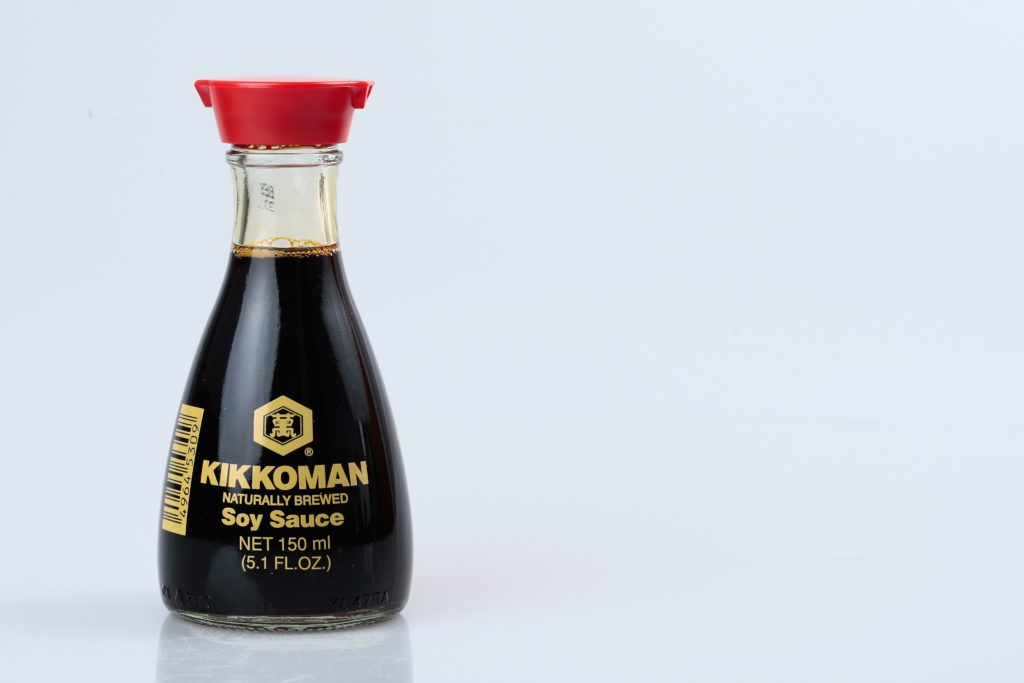 Kikkoman used animal research to create dubious health claims about their goods for a long time. This practice was put to an end thanks to devoted vegan activist groups like PETA.

A corporation cannot be labeled vegan if it supports animal testing and cruelty, as this goes against the core principles of veganism. Even if corporations do not employ any animal-based ingredients in their products, this is true.

Despite the fact that Kikkoman’s acts were reprehensible, grudges cannot be held indefinitely. As a result, we’d still call it vegan because Kikkoman’s soy sauce contains no clearly listed animal products.

Non-vegan ingredients in soy sauce to look out for

While the best soy sauce is made using traditional fermentation methods and contains only the essential ingredients of soybeans, salt (or brine), wheat (or other grains), and yeast or mold cultures, some mass-produced soy sauce contains colors and preservatives that are not readily apparent to most food consumers. Are there any, however, that vegans should avoid?

In most soy sauces with additional components, you’ll notice “Colour – Plain Caramel” or something similar stated among the ingredients. This is another name for the food ingredient E150, which is used to color everything from brown bread to beer, rum, vinegar… even soy sauce.

Thankfully, it’s created from carbohydrates derived from plants (and frequently by-products of sugar refinement), so it’ll virtually always be vegan-friendly.

Some soy sauce contains citric acid. However, this comes from citrus fruits and is vegan.

So-called “flavor enhancers” E631 and E627 are found in some soy sauces, such as Amoy Light Soy Sauce, Amoy Reduced Salt Soy Sauce and Lee Kum Kee Sweet Soy Sauce. The former is commonly manufactured from pigs or fish, but tapioca starch can also be used. Because the latter is frequently produced with sardines, it’s worth double-checking with the retailer or maker unless the sauce is clearly labeled as vegan.

Lactic acid can be generated from plant or animal sources, as we explain in our lactic acid article, but we feel it is highly unlikely to be non-vegan. If you’re unsure, talk to the manufacturer.

It’s a potassium salt of sorbic acid that’s made without using animal products and utilized as a preservative in some soy sauces.

Here’s a simple vegan soy sauce recipe you can try.

So, there you have it. This article has answered the key question, “is soy sauce vegan?”

With the recipes in this article you can get to producing your own vegan soy sauce, as well as some delicacies with soy sauce that are completely safe for consumption by vegans.