Is This New Mushroom Bacon the Most Sustainable Plant-Based Protein? 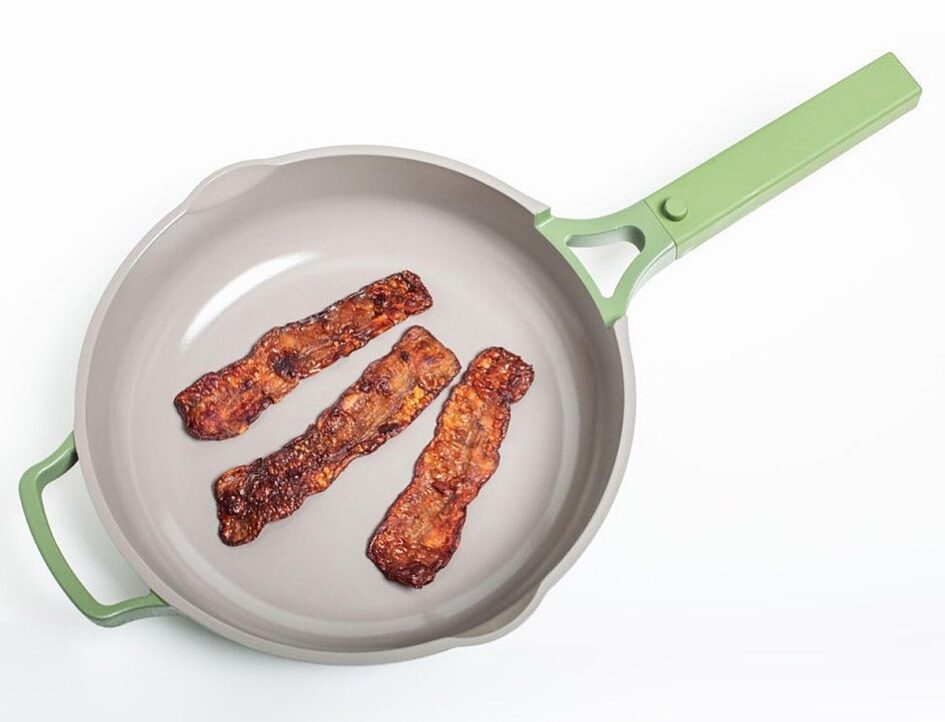 For many flexitarians, bacon is the final frontier when it comes to fully adopting a plant-based diet. The classic breakfast staple has historically been difficult to replicate, but AtLast Foods is developing one of the most delicious and sustainable plant-based bacon on the market and the company intends to significantly expand its production and distribution capabilities. Partnering with Whitecrest Mushrooms, the New York-based food tech company is capable of making 3 million pounds of mushroom bacon on just one acre of land.

By partnering with Whitecrest, AtLast – a subsidiary of the biotechnology company Ecovative Design – will be able to scale up its production for its MyBacon products. The mycelium-based mushroom bacon is designed to cook, taste, and feel like traditional bacon without any animal products. AtLast will use the mushrooms grown at the Whitecrest farm located in Ontario, Canada in its proprietary AirMycleium technology. The technology produces whole-cut vegan bacon, minimizing environmental costs when compared to traditional bacon production.

“After more than a decade of experience growing and producing the highest quality gourmet mushrooms, we’re excited to leverage our expertise in the new market of alternative proteins,” P of Whitecrest Mushrooms Murray Good, said in a statement. “This partnership has given us new opportunities to innovate in an entirely new landscape while keeping sustainability at the core of our practice.”

Together, the two companies will facilitate one of the most expansive and sustainable plant-based bacon businesses to date. With Whitecrest’s mushroom-growing experience, Ecovative will be able to maximize its MyBacon production. The two companies plan to build a farm where the mushrooms will be grown, made into plant-based bacon slabs, and brined to give customers the full experience of bacon.

“Our partnership with Whitecrest and Ecovative will bolster the growth of Atlast to address the critical needs of an expanding alternative-meat market,” Chief Operating Officer of Atlast Food Co. Steve Lomnes said in a statement. “It will not only enable us to put more MyBacon strips onto the plates of consumers but unlock a sustainable solution to producing food in a way that is beneficial to our entire ecosystem.”

Currently, 57 percent of food-related greenhouse gas emissions are derived from meat production, and Atlast intends to undercut the pork industry nationwide. The new plant-based bacon can be produced at an exponential scale when compared to raising pig livestock. The faster yield times and lower land usage makes the mushroom bacon more sustainable and eventually, more profitable. The plant-based pork market is expected to surpass $10.5 billion by 2030, making it one of the fastest-growing plant protein categories worldwide.

Atlast’s partnership with Whitecrest follows the company’s $40 million funding round last year. Alongside the funding round, the company’s parent company also secured $60 million in an investment package, which it intends to use to propel itself into the national bacon market.

Plant-based bacon sales are currently up 25 percent from last year, meaning that vegan bacon is becoming a real competitor for pork industry giants across North America. The MyBacon is only available at Honest Weight Food Co-op in Albany, NY, but the new production capabilities will allow the food tech company to truly enter the national market.

“AtLast began as a question on how to disrupt factory farming and help alleviate the climate crisis, and we found the solution waiting for us in nature,” Co-founder and CEO of Ecovative and Atlast Eben Bayer said in a statement. “By growing mycelium, we produce food in a climate-conscious way that doesn’t compromise on taste. Now more than ever, Spaceship Earth needs more plant-based food options. Partnering with Whitecrest Mushrooms allows us to meet those growing needs.”