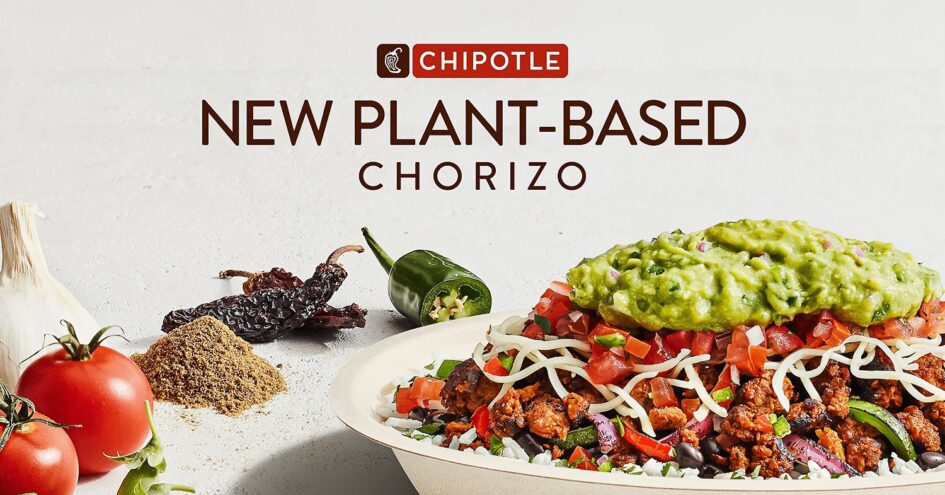 The fast-food chain will trial Plant-Based Chorizo at approximately 100 stores in Indianapolis, Orange County, and its home city of Denver. Traditional chorizo, a staple in Spanish and Mexican cuisine, features ground and heavily seasoned meat.

In a 2019 interview with Bloomberg, Chipotle’s Chief Marketing Officer Chris Brandt said that typical plant-based meats are “too processed” to include on the brand’s menu, which boasts a total of just 53 ingredients. With that in mind, the company created its own product in-house instead of partnering with external brands.

According to Bloomberg, Chipotle has been working on a plant-based version of the spiced sausage for a year. It combines pea protein, water, olive oil, cumin, paprika, and other fragrant and commonly-used spices. Each portion contains 20 grams of protein and zero soy, gluten, or artificial flavorings.

Chipotle’s new vegan chorizo replaces the pork and chicken-based version that the company ditched in 2017 for the sake of efficiency. According to Brandt, the plant-based protein should appeal to meat-eaters, vegetarians, and vegans alike.

Brandt added: “I don’t think people will miss the meat at all.”

Plant-based food is increasingly popular with Americans. According to a 2020 survey by Market Research Firm Packaged Facts, 36 percent of those consulted said that they regularly consumed vegan and vegetarian meals, with just five percent following a strict vegetarian diet and three percent identifying as vegan.

“Omnivores and flexitarians make up the lion’s share of consumers who eat these products due to their sheer numbers,” said Packaged Facts’ food and beverage publisher Jennifer Mapes-Christ at the time.

‘I don’t think people will miss the meat at all’

To order plant-based and meat-free options only, customers can select the V+ icon as a preference on the Chipotle website. Menu staples such as beans, rice, salad, vegetables, guacamole, lime-spiked tortilla chips, and salsa, are all vegan-friendly.