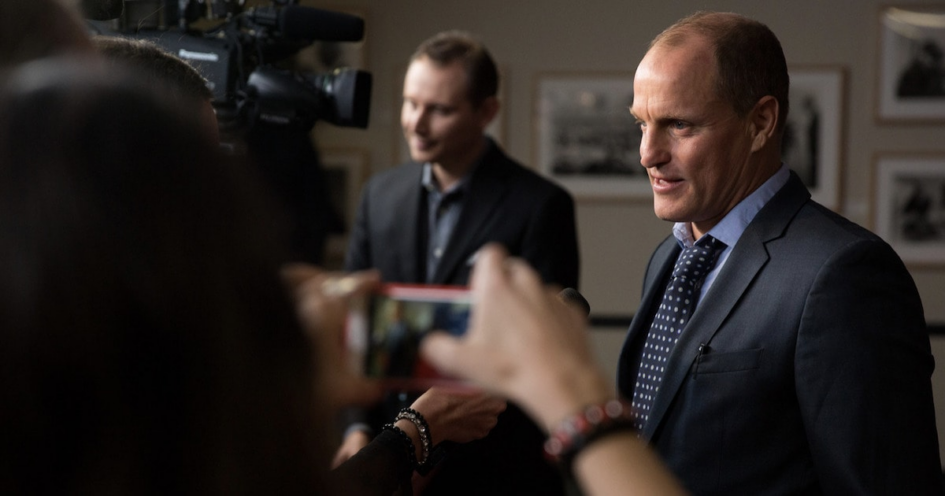 Woodrow Tracy Harrelson—Woody to most—is known for his expert portrayal of seedy characters in blockbuster films such as Natural Born Killers, The People vs Larry Flint, The Hunger Games trilogy, and more recently True Detective. While his acting credits are notable and his talent profound, we follow Harrelson for his vegan acts of kindness and entrepreneurship. From mentoring Stranger Things’ vegan star Sadie Sink to investing in eco-friendly and plant-based businesses, Harrelson is as vegan as you can get.

Harrelson has been vegan for 30 years—far before the invention of modern conveniences such as Beyond Burgers and non-dairy Ben & Jerry’s. This was even before the introduction of soy milk at Starbucks. Back in the day, if you went vegan, it virtually dictated that you also ate whole-foods plant-based, because processed vegan products were exceedingly rare. Over the years, Harrelson adopted a predominantly raw vegan diet. He told InStyle, “I eat vegan, but I eat mostly raw. If I have a cooked meal, I feel my energy drop. So when I first started shifting my diet, it wasn’t as much a moral or an ethical pursuit but an energetic pursuit.” Granted, he does admit to enjoying the regular vegan-friendly libation. In his mind, the mostly raw vegan diet balances the sluggishness post-alcohol.

Being a vegan mentor

Sadie Sink may still be vegetarian if not for Harrelson’s gentle guidance. The starlet credits him for educating her about the vegan diet while the duo worked together on the 2017 film, The Glass Castle. Actress Thandie Newton also mentioned in an interview that she had gone vegan for months while shooting on the set of Solo: A Star Wars Story with Harrelson. Harrelson also influenced former vegan Liam Hemsworth to give the lifestyle a try while the two shot The Hunger Games. Hemsworth followed a plant-based diet until 2019 when he re-introduced animal products after battling with kidney stones. Perhaps another film with Harrelson could get Hemsworth back on the vegan bandwagon.

Even though Harrelson feels best when eating raw, he can still appreciate and lift up other vegans in the culinary scene. As a friend of Chad and Derek Sarno—the chefs behind the Wicked Healthy and Good Catch brands—Harrelson wrote the foreword for the pair’s cookbook, The Wicked Healthy Cookbook. He’s also employed many vegan chefs (including the Sarnos) to cater his private events and “on-location” filming days.

Campaigning for a vegan world

Harrelson’s transformative powers are not withheld when he’s off set. He’s active about spreading the plant-positive message and takes action to do so. In 2019, he joined forces with PETA to protest an annual pig rodeo in Texas. That same year, he was one of the many celebrities behind Million Dollar Vegan’s initiative to persuade the Pope to go vegan for Lent. He’s also contributed his voice and support to Sir Paul McCartney’s ongoing Meat Free Mondays campaign.

As a Sarnos brothers friend and fan, Harrelson was one of the slew of big names to invest in their vegan seafood line in 2020. Today, Good Catch has crossed the pond from the UK to the US where its plant-based tuna, fish sticks, and crab cakes are available in major grocers nationwide. He’s also an investor in a Baltimore, MD property that housed vegan-friendly restaurant L’eau de Vie. Harrelson bought the real estate back when it was a boutique hotel, though the property has been redeveloped into luxury apartment homes. The restaurant opened on the bottom floor of the new apartment building, but unfortunately, it has since closed.

Earlier in his career, he partnered with entrepreneur Jeff Golfman to launch Prairie Pulp & Paper—an eco-friendly, tree-free paper company that supplies paper to Staples office stores in Canada and the US. When in Los Angeles, Woody enjoys dining at one of the four locations of Sage Vegan Bistro—a vegan microchain he threw some money at in 2017 to support the expansion of its vegan beer garden in the Echo Park neighborhood of LA. Sage’s mix of exceptional raw and cooked dishes may have played a part in securing Harrelson’s generosity.

Tanya Flink is a Digital Editor at VegNews as well as a writer and fitness enthusiast living in Orange County, CA.

Everything that’s vegan at The Cheesecake Factory