It’s Becoming a Plant Based World, the Crowds at Plant World Expo Shows 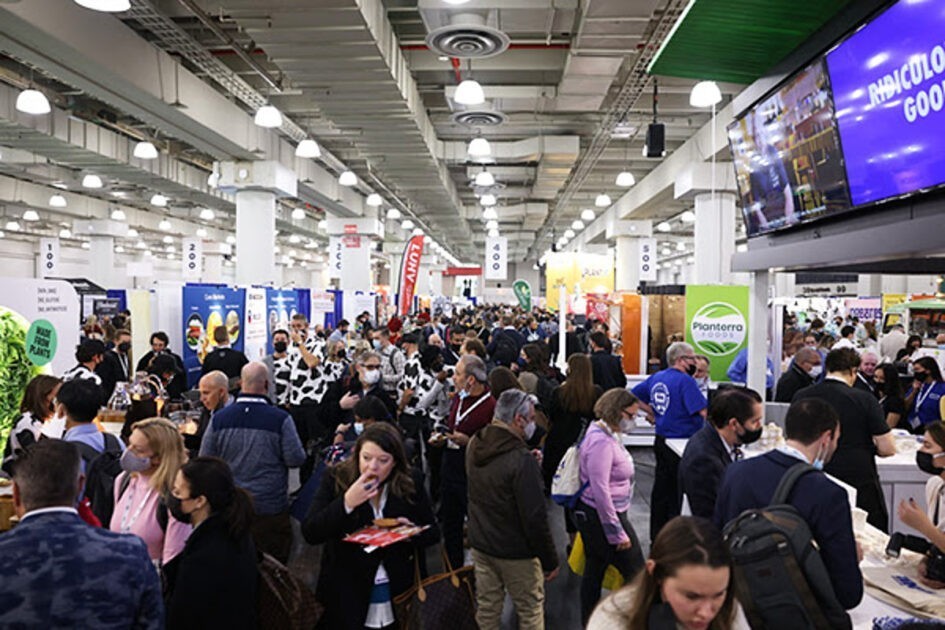 If you ever doubted that plant-based eating is here to stay, all you need to do to be convinced is walk the vast rows of booths at the Javits Center during the Plant World Expo and see how alternative foods are thriving. Between the demonstrations of melt-ability of Miyoko’s Creamery oat-milk cheese, demonstrated on a delectable vegan pizza, or the not-too-sweet Eggnog from Elmhurst, which switched to making only plant-based milk, or the numerous chicken substitutes, each breaded and baked to perfection, from vendors big (Gardein) and small. Then walk on over and take a sample of a pulled “pork” sandwich made from jackfruit or a sip of chocolate milk low in sugar and high in protein followed by a bite of “meat of the future” from Future Farm.

The choices are endless, the foods are delicious, and the new premium from all these foods makers and sellers is on creating a universe where consumers no longer have to sacrifice anything to eat their favorite foods but a made with fully plant-based ingredients. “Easy, affordable, tasty and offering a one-to-one swap” is what consumers are looking for when they go to buy plant-based versions of their favorite foods,” explained the keynote speakers, who represented Kroger supermarkets, Compass food services, and the plant-based food industry association.

This trend is growing while other food sales are either stalled or waning, and in an economy where the supply chain is unsteady and shortages have hit traditional foods, plant-based is looking more attracted to consumers who want healthier choices for themselves and the planet. That was the message on display at the Plant World Expo taking place today at the Javitz Center in New York City, where more than 200 exhibitors and thousands of attendees gathered to taste, market, and wonder at how far the plant-based food industry had come since 2019 when the first expo was held.

The biggest difference between the first event back in 2019 – before the global pandemic made us even more conscious and aware of the impact of our food choices, and put a higher premium on health – and the one taking place this week is the breadth of offerings and the fact that big players like Nestle, Cargille, and others are eagerly entering the plant-based arena, says Ben Davis, who is the organizer of the event, the largest of its kind.

Plant-based “chicken” is leading the way, along with other innovations

“Last time it was all about burgers,” Davis noted, as he surveyed the vast offerings and attendance by foodservice professionals and retail professionals, distributors, investors, and manufacturers. “But now the difference that those months have made on the industry and consumer demand for healthier, plant-based foods that are better for them and the planet was in evidence at every turn. The key to success in this industry is making food that is tasty and affordable, easy to prepare, and does not require any sacrifice from consumers who want to eat what they love.”

There were more new “chicken” launches at the expo than ever, along with milks, cheeses, non-dairy creamers, snack foods, yogurts, and sausages, and other pork substitutes. Burgers showed up, but not with the dominating presence they had in the past.

From environmentalists to flexitarians: Consumers leading the way

Davis himself went vegan in his younger days as a musician living in Colorado but later returned to New York to begin to work with his father, conference producer Joel Davis and founder of JDEvents, on the first-ever Plant World Expo in 2019. “We saw a white space in the plant-based market between the smaller Veg-Fests and a large conference,” he recalls. They put on their first event just months before the world changed and everything shut down for the COVID-19 shutdowns. The biggest change he sees between that initial foray back in the fall of 2019 and now is that large companies like Nestle are joining the movement.

“I could choose to be an activist out on the street on a picket line, demonstrating about sustainability, or I could be in here working with executives who are showing up from the big companies like Nestle, whose representatives showed up in London [at the Plant World Expo there] in October and presented to our audience that the food industry is not sustainable. This is what we’ve been saying all along! But we are not the only ones to tell the story.”

It’s no longer enough for environmentalists and animal activists to participate in this global change, he explains, since real change comes when one executive, or a handful, such as the suite of leaders at Compass food services, who are committed to offering up more plant-based options in institutional cafeteria settings like businesses, public spaces, and schools.

Or Elmhurst, a traditional dairy company dating back to 1925, whose executives decided to completely pivot, ditching all traditional dairy, and moving in one fell swoop to offer an all plant-based lineup of products. “That’s a commitment,” Davis adds, “The whole infrastructure had to change for them to fully do this, since the equipment and processing, all the way up and down the line, had to be replaced. For that to happen, they have to believe fully in a plant-based future. It sets them apart from the others. There has to be massive investment in these new products.”

Change comes when animal products are displaced by plant-based ones

The biggest measurement of success will be when conventional animal products get replaced by plant-based alternatives. “There’s growth in plant-based, of course, but when e know we have been successful it’s when we can see, and measure, that we are eating fewer animal products as well,” Davis explains. That is already happening in dairy, and to some extent in the meat category, but the next frontier will be chicken, then cheese and fish.

“It’s hard to tell someone who has gone vegetarian that it’s great they gave up meat but now they need to give up dairy. And if you have given up meat and dairy, now you need to give up fish. Seaspiracy helps but until you watch that you wonder, what’s so bad about fish?” Davis was explaining that these new areas, beyond the plant-based burgers and milks, have more educating to do, and part of his job, and those of everyone at the expo, is to make the swaps easier than ever.

“That is where the flexitarians come in,” Davis points out. “They are the ones you have to reach.” If we only make foods for the plant-based or vegans, we are missing the other vast expanse of the population. If you want to see 40 percent growth year over year, you have to reach everybody.”

If watching the throngs lined up to taste test the potato and nut cheeses melted perfectly on slices of steaming hot pizza at the Javits center is any indication, we are well on our way.

So What Happened at the Plant-Based Expo in London?

How To Get To Chichen Itza Independently & Beat The Crowds