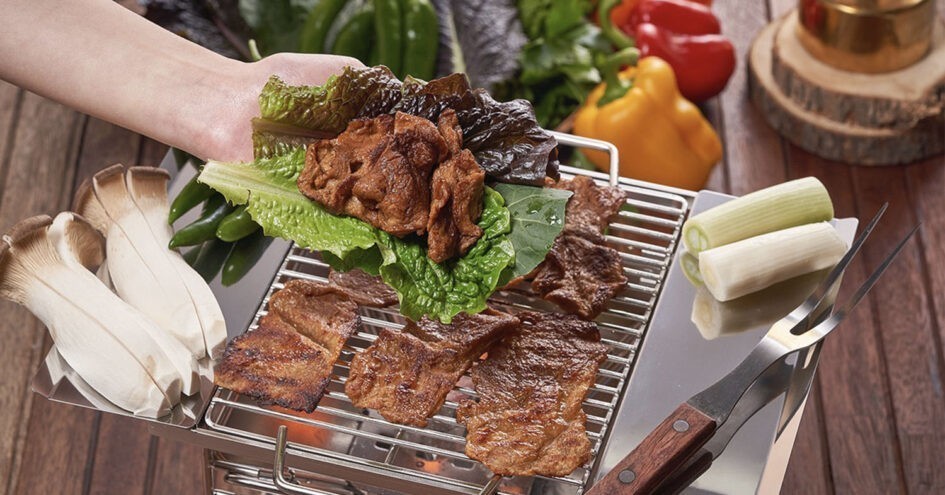 Being Korean and married to a non-Korean is … well, like a Facebook relationship in the aughts: it’s complicated. In my extended family of five, my major headache is balancing traditionally Korean parents with a vegetarian husband while running a 95 percent vegan household.

Here’s why it’s so hard: It’s because picking a restaurant for the five of us feels like negotiating a four-year NBA contract, even in health-obsessed L.A. Restaurant selection is a struggle for our once-weekly dinners. My frugal, traditional parents think most of the vegetarian restaurants are too expensive or newfangled, while my vegetarian husband wouldn’t set foot in a traditional Korean barbecue restaurant because of the cloud of meat smoke that permeates everything, from your nostrils to your clothing. (Don’t take this the wrong way, Korean barbecue restos, but eating your bibimbap shrouded in meat smoke is not fun for vegetarians or vegans.)

We’ve found a middle road, with my mom cooking more vegan meats at home for our extended family meals and even inventing her own proprietary vegan meat (go, Mom!), but I miss going out. Our big family tradition involves going to Los Angeles and Orange County Korean barbecue restaurants, which aren’t at all-inclusive—in fact, some require all at the table to do AYCE, or All You Can Eat—to vegetarians like my husband.

As I move toward veganism with my husband, I feel annoyed and resentful that I can’t share an important cultural experience with him and with other vegan and vegetarian friends. There’s something so warming to the soul about gathering in a loud, smoky room over a few too many bottles of Jinro soju, the chatter of your friends, and a sizzling grill.

It’s time for Korean restaurants to embrace vegan meat. In fact, why not go all the way and create a new trend with a built-in clientele: a fully vegan Korean barbecue spot. Given the rising ranks of plant-based eaters and flexitarians, I predict it would go gangbusters.

So, who’s going to be brave, stepping up to the grill wielding their knife, scissors, and spatula like Joanne Molinaro, AKA The Korean Vegan—proud of our collective heritage but willing to forge a new path?

I think this vegan-friendly Korean barbecue spot should be in LA’s Koreatown, where we blaze a vivid force as a people—the largest population of Korean folks outside of Korea. Yes, there are cost and cultural considerations, especially in light of what restaurants have endured over the past two years—especially mom-and-pop spots. I don’t expect every Korean barbecue spot to embrace vegan meat, and as a former restaurant owner, I would advise market research before adding it to a menu or opening a dedicated restaurant.

But consider this: We’ve faced down war, occupation, military dictatorship, racism, and the challenges of staying connected across a diaspora—so you’re going to tell me we can’t take on the frontier of plant-based meats on a grill, all in the name of improving the planet? I’m just not buying it if you’re saying, “Oh, it wouldn’t work.” I believe flexitarianism is not only a big part of the Korean diaspora’s future, but a big part of our heritage too.

We are a progressive, activist diaspora strongly rooted in nature, hiking, and food as one of our strongest connections to the earth, and I know we care deeply about the planet and its animals. (Witness: The film Okja and the incredible forward-thinking mind of Bong Joon-ho.)

We revel in vegetables, including bright, zingy, sesame oil-tinged salads and crunchy pickles preserved in soy sauce. But Korean America may be lagging behind the motherland of Korea when it comes to veganism. As of 2020, South Korea counted 500,000 vegans, approximately 1.5 million people pursue similar plant-based diets, and flexitarianism is on the rise, with as many as 10 million following the diet, according to the Korea Vegetarian Union. Korean convenience stores carry plant milks, and I’m seeing more vegan-friendly cafes pop up in Seoul every month. South Korean food-tech manufacturers like Zikooin developed vegan beef options like Unlimeat, which features upcycled ingredients, including oats and grains that would otherwise go to waste. In 2020, Korean supermarket chain Lotte Mart released vegan cutlets and chicken nuggets from Gogi Daesin, which means “in place of meat.”

For those still in doubt that a plant-based Korean barbecue restaurant would work, look at the success of vegan Southern-style barbecue made by Compton Vegan, Lemel Durrah’s genius Los Angeles cafe that slings BBQ Jackfruit Ribz and BBQ Chik’n & Mac all day long. Durrah has translated traditional meat-based Southern barbecue to a thriving plant-based business. Also, I’d like to offer the world of plant-based meats and how far they’ve come in being absolutely delicious, from Field Roast sausages to bone-in jackfruit ribs (that lemongrass! Sauce Stache is a master). Look, we’ve already got the perfect vegan sides in K-BBQ cuisine: mu radish and lettuce ssam, kongnamul (bean sprout salad), various ssamjang for killer umami flavor, and of course, kimchi (vegan fish sauce or mushroom broth to the rescue!).

Since fat adds to a great sizzle and drip on the grill, vegan oils, rubs and butters would be plentiful at the table, along with liquid smoke to brush on. Vegan meats would come pre-marinated in saucy gochujang marinades. And you can’t tell me that vegan gochujang-marinated beef wouldn’t be to-die-for when wrapped up in a lettuce or perilla ssam wrap with some ssamjang sauce. The restaurant could work with vegan butchers to develop special cuts of vegan microbrisket, superthinly sliced, along with vegan bacon to wrap around vegan pork belly. I’m drooling already.

The point here is not only that we all know we’ve already moved to a culture where we all should be eating less meat—it’s that if we’re paying heed to inclusivity in a lot of other sectors culturally, it can’t just be lip service: food should strive to be inclusive too. That means not splitting up families who want to find a place where they can all eat a traditional dinner together that gives deep cultural meaning to their lives. I look forward to taking my son to a Korean barbecue restaurant where we can show him that both his parents and his grandparents can get their proteins while learning our food history and forging new paths in food traditions.

Dakota Kim is a veteran journalist focusing on food and culture. Her work has appeared in the Los Angeles Times, NPR, New York Times, Civil Eats, and Vice, among other publications.