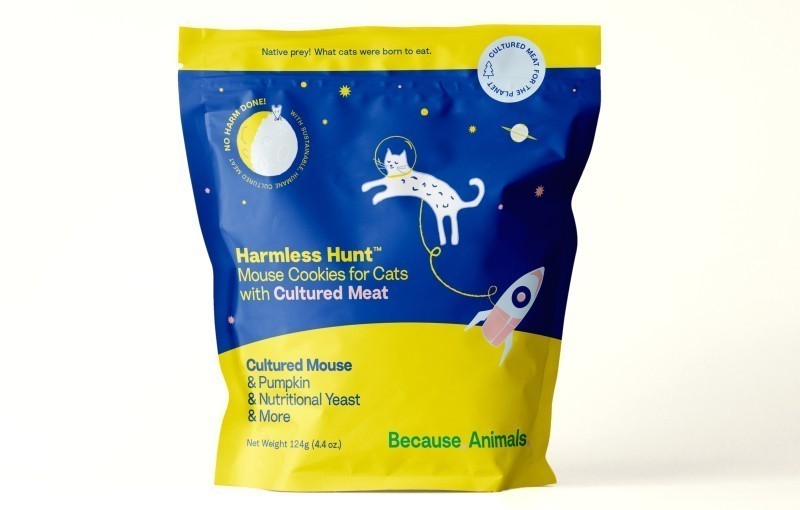 Cultured meat or lab-grown meat made from animal cells is becoming popular as an alternative to carbon-intensive and unethical animal agriculture. It is already available for human consumption in Singapore and a few other countries are gearing up to roll it out for consumers over the next couple of years.

However, not much discussion has taken place on the use of cellular agriculture for developing alternatives to conventional animal foods.

Now, a company in Pennsylvania, US, is changing this. It has unveiled what it calls the world’s first cultured meat product for pets.

The pet food and cellular agriculture technology company ‘Because, Animals’ has launched a cultured meat product – Harmless Hunt Mouse Cookies for Cats – made with mouse cells.

It was put at display for the public at SuperZoo, one of the largest pet trade shows in the world, at Mandalay Bay in Las Vegas.

This achievement marks the world’s first product made with cultured meat as well as the first cookie for cats that includes the cat’s native protein source — mouse.

The best part…not a single mouse was harmed!

The ingredients in the cookies include, cultured mouse blended with tempeh, miso, nutritional yeast and more.

According to the taste tests undertaken by the company, even finicky cats enjoyed the novel mouse protein treats.

The company says that by using mouse cells, Harmless Hunt avoids the most prevalent food allergens in pets — beef and poultry. Since it is produced in a sterile, controlled environment, it is free of antibiotics and pathogens, and contains no slaughterhouse by-products or rendered ingredients.

“The public launch of Harmless Hunt is a milestone for us, for the cultured and alt-protein industry, for pet food, and for animals raised and slaughtered to feed cats and dogs,” said Because, Animals co-founder and CEO Dr. Shannon Falconer. “We are finally able to provide pets with a healthier, safer, greener choice at a price that will be on par with other premium retail products.”

Harmless Hunt Mouse Cookies for Cats are expected to be on the market in early 2022. The company is now taking pre-orders and getting ready to sell a limited batch at the end of the year.

Because, Animals began developing cultured meat in 2016, and claims to have achieved a reduction in the cost required for commercial-scale production. It has eliminated the use of fetal bovine serum (FBS) – a costly, scarce, animal-based ingredient derived from cruel slaughter practices that is used by several cultured meat producers.

Cultured meat is safer and healthier for cats and dogs, better for the environment, and more humane than conventional products. It is cruelty-free but not vegan since the meat is made of real animal cells and not plant-based ingredients.

“Where do Hot Dogs Come From?” Not From the Cow, But From the Lab, Says This New Children’s Book!