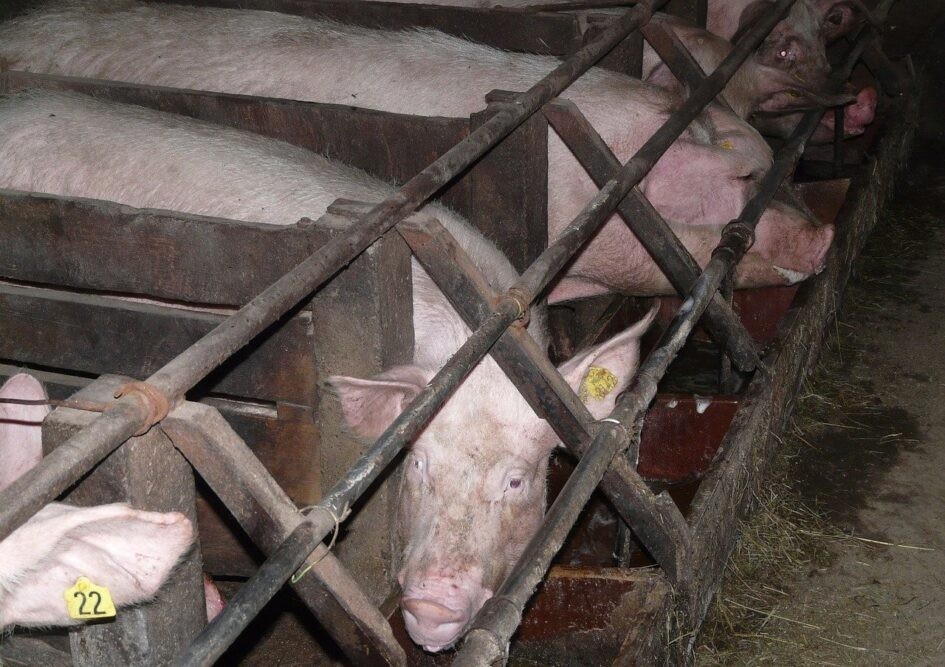 In a move to ban the cruel practice of using metal crates to confine pregnant mother pigs, the Karnataka Animal Welfare Board (KAWB) has issued a circular directing all district deputy directors to prohibit their manufacture, sale, and use.

The use of gestation and farrowing crates in intensive pig farming has been a topic of controversy for a long time across the world. These crates aka “sow stalls” are metal cages, essentially the size of a pig, with concrete or slatted floors, which leave the animals unable to turn around or even stand up without difficulty.

In factory farms, pregnant pigs are transferred to farrowing crates to give birth and are kept confined in the small space until their piglets are taken away. These crates are designed to bring in “efficiency” in pork production, and allows farmers to artificially inseminate and breed several pigs at the same time.

Farrowing crates are fundamentally the same as gestation crates, except they contain small side rooms for piglets. The KAWB circular explained that both types of crates deprive pigs of sufficient space, due to which mother pigs and piglets aren’t able to move. They are made to forcefully live in a restrictive environment and sit in their own waste, which leads to pressure sores.

ALSO READ: France to Stop Shredding and Gassing of Male Chicks From 2022

In an appeal made to KAWB, People for Ethical Treatment of Animals (PETA) India had stated that the National Research Centre on Pig deems gestation and farrowing crates illegal, as they violate Section 11(1)(e) of The Prevention of Cruelty to Animals Act, 1960.

Both types of crates are so narrow that mother pigs are denied even basic movement. As such, they are deprived of everything that’s natural and important to them, such as opportunities to forage, build a nest for their young, socialise with other pigs, and regulate their body temperature (which they often do by wallowing in mud).

The extreme stress and frustration caused by this severe confinement result in abnormal behaviour, such as constantly biting at the enclosure bars or continuously “chewing” the air.

Gestation crates and other such confining devices used in intensive animal farming create breeding ground for zoonotic diseases. In July, an outbreak of H5N1 bird flu killed an 11-year-old boy in Delhi.

Similarly, a 12-year-old child in Kerala died from Nipah virus, while several healthcare workers in the state have been infected. PETA has now urged Smt J Chinchurani, Kerala’s minister for animal husbandry and dairy development, to close down pig farms in the state to prevent further spread of the infection and a potential pandemic. According to the World Organization for Animal Health, Nipah virus is highly contagious in pigs and has devastating zoonotic potential, meaning that it can infect humans from other animals.

It was first observed in farmed pigs in Malaysia and Singapore in 1998 and 1999 and resulted in 257 cases of febrile encephalitis, including 100 deaths, as of 27 April 1999 in Malaysia alone.

Most human cases were then found to have been caused by exposure to pig farms. The pigs in Malaysia had become infected by bats who were attracted to nearby fruit trees.

Similarly, the farmed pig population in Kerala could easily become infected with the Nipah virus through native fruit bat droppings or saliva.

The World Health Organization warns, “Over 30 new human pathogens have been detected in the last three decades, 75% of which have originated in animals.”