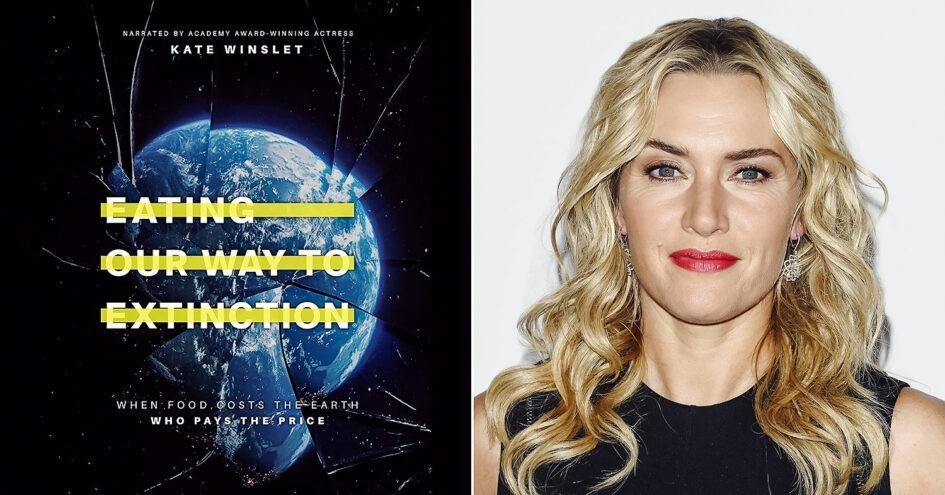 Fires are raging around the world. Ecosystems are being destroyed. More than 26,000 species of animals are now under threat of extinction. These are just some of the planet’s most pressing issues that are explored in the new environmental documentary, Eating Our Way To Extinction, narrated by Academy Award-winning actor Kate Winslet.

The celebrity-studded film—coming to limited theatrical release and streaming platforms Sept. 16—delves into the connection between the global food industry (including animal agriculture and commercial fishing), fossil fuel dependence, and the current climate crisis.

The film explores the true cost of human consumption—including transportation, unsustainable products, and the production of animals for food. It also examines critical issues facing human survival, such as food insecurity, biodiversity loss, and drought. But it’s not all doom-and-gloom; the film offers solutions to how every one of us can make a difference through practical, sustainable changes.

Hollywood A-listers have become a powerful force in spreading the message of the climate crisis, and this film leverages the power of celebrity to deliver that message. But it also features commentary from scientists and other renowned figures like Sir Richard Branson. It’s also endorsed by environmentalist and Oscar-winning actor Leonardo DiCaprio, who says, “This is the film future generations will be wishing everyone watched.”

The documentary includes harrowing testimonials from the communities most impacted by the climate crisis. Namely, communities in poverty, and indigenous people.

“Our Earth. Ever in flow and motion. A dynamic symphony of forces, all working together,” Winslet says in the film’s trailer. “But in recent years, it’s beginning to become clear that our world is poorly prepared to cope, and time is running out.”

The documentary garnered more than $200,000 in crowdfunding on Indiegogo. It was also backed by Blue Horizon, a firm that invests in the alternative protein sector. Filmmakers and brothers Ludo and Otto Brockway, the founders of Broxstar Productions, directed the film.

Their London-based production company also created the short Facebook film, Planet Earth—As We Eat Our Way To Extinction, which first drew the attention of DiCaprio.

The connection between the food industry and the global climate crisis is readily apparent.

The chemicals used to protect crops from insects and weather create toxic runoff that destroys other ecosystems. The factory farming of livestock for food has a significant environmental footprint.

In addition to contributing to land and water pollution, deforestation, biodiversity loss, and acid rain. It’s also a major driver of global warming. The production of livestock for food around the world is responsible for approximately 18 percent of all greenhouse gas emissions.

​​“Our beautiful planet has passed some major tipping points and we’re rapidly heading towards a world that may soon become inhospitable for human life. The research now shows that the main driver of environmental destruction and biodiversity loss is our insatiable demand for meat and dairy,” explained Otto.

Winslet’s narration of the documentary should come as no surprise. The Mare of Easttown actor has eschewed meat. “Our fridge is always full of spinach, kale, cucumbers. I’m vegetarian and my husband is vegan, so there’s a lot of plant-based focus in our home,” she said. “My husband turning vegan is relatively recent, so that’s been a really fun education because you have to learn to be a little more inventive with foods.”

For more information on Eating Our Way to Extinction, see here.