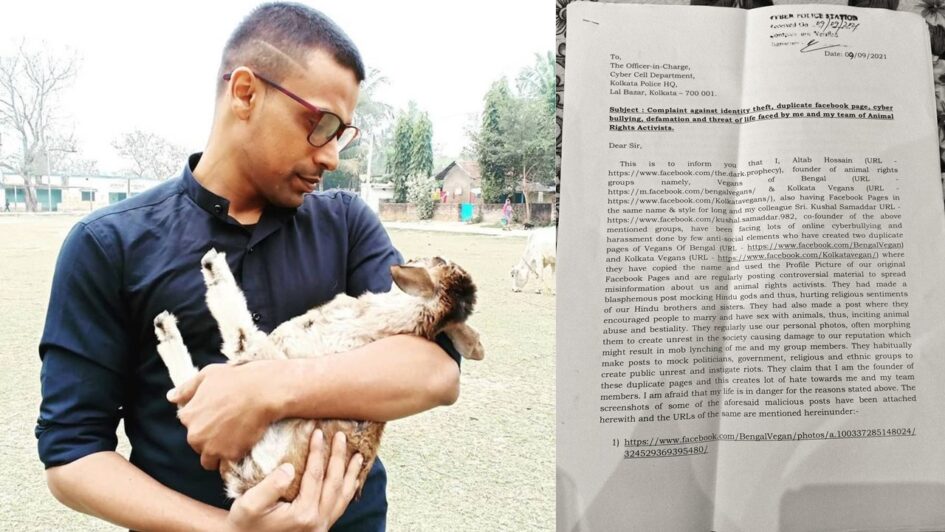 Altab Hossain, a Kolkata-based vegan activist and founder of animal rights groups ‘Vegans of Bengal’ and ‘Kolkata Vegans’, has alleged that he and his colleague Kushal Samaddar have been facing cyberbullying and harassment from the past several months.

Altab has now filed a complaint with the Cyber Cell Department of the Kolkata Police citing danger to his life as a result of the hatred created against him by the alleged fake Facebook pages.

He mentioned in the complaint letter, a copy of which was shared with The Vegan Indians, “….they (persons who have created fake profiles) are regularly posting controversial material to spread misinformation about us and animal rights activists. They had made a blasphemous post, mocking Hindu gods, and thus, hurting religious sentiments of our Hindu brothers and sisters.”

“They had also made a post where they encouraged people to marry and have sex with animals, thus, inciting animal abuse and bestiality. They regularly use our personal photos, often morphing them to create unrest in the society, causing damage to our reputation which might result in mob lynching of me and my group members. They habitually make posts to mock politicians, government, religious and ethnic groups to create public unrest and instigate riots.”

“They claim that I am the founder of these duplicate pages and this creates lot of hate towards me and my team members. I am afraid that my life is in danger for the reasons stated above.”

The letter further read, “The above offences, namely, breach of personal liberty, privacy, defamation and fear of life and manhandling will not stop until and unless the said duplicate Facebook Pages are taken down and are prohibited from operating and I and my team will forever remain in jeopardy and fear and will be hindered from practicing freedom of speech and right to life.”

He also shared the screenshots of some of the aforesaid malicious posts along with the URLs (see below) in the complaint letter.