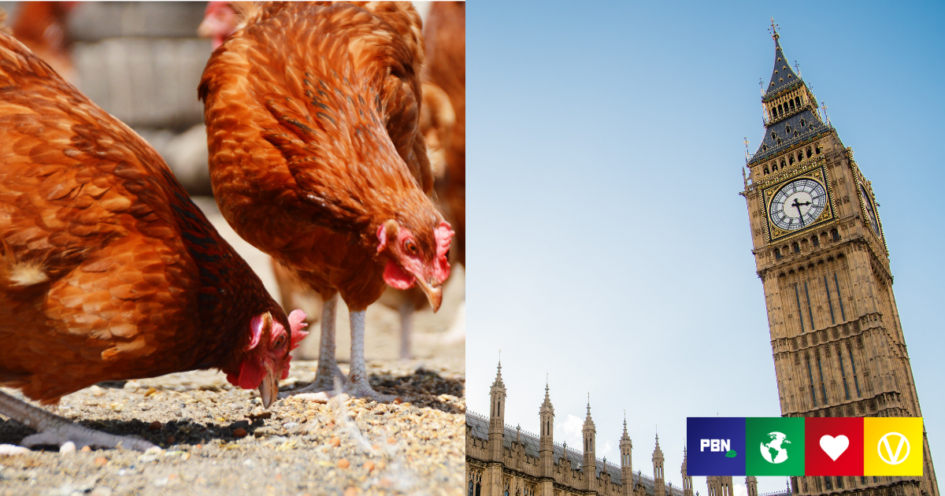 Fourteen animal protection charities are calling on lawmakers to stop illegal and ‘painful’ practices during the slaughter process on UK chicken farms.

This week, the coalition signed a joint letter to MP Zac Goldsmith, minister of the Department of Environment, Food, and Rural Affairs (Defra).

In the letter, they set out multiple alleged breaches of several animal welfare laws and call on Goldsmith to update legislation and investigate.

Currently, holding chickens by their legs is illegal under 2006 EU law. The Welfare of Animals legislation makes it clear no animal should be dragged by the head, ears, horns, legs, or tail. Moreover, they can’t be handled in any way that causes ‘unnecessary pain or suffering’.

However, under the official Government Codes of Practice, holding chickens by the legs is referenced as a possible way of handling – which many farmers use as guidance, according to the acclaimed animal welfare nonprofit The Humane League UK.

A solicitor for one of the charities, Advocates for Animals, notes that the legislation was specifically created to protect animals. The fact that it is allegedly being broken is ‘unacceptable’, Edie Bowles continues, especially as it causes immense stress.

Pru Elliott is a senior campaigner at The Humane League UK. In a statement sent to PBN, they said: “At an already distressing and often painful time for these chickens, they are grabbed by their legs and flung upside down, with producers often carrying six chickens per hand.

“Chickens don’t have a diaphragm like us, so being carried upside-down causes their internal organs to crush their lungs.

“On top of that, intensively reared chickens have very fragile legs and joints. Carrying them like this is causing huge amounts of suffering and the government isn’t doing anything to stop it.”

It comes as horrific figures reveal that more than three million chickens are transported to slaughter every single day in the UK.

Many animal protection charities say it’s likely that ‘all’ commercial-sized farms catch chickens by the leg as part of the process.

To fight it, they call on Goldsmith to update both the Broiler Code and Laying Hen Code. This is in the hopes no chicken is harmed in this way in the future.