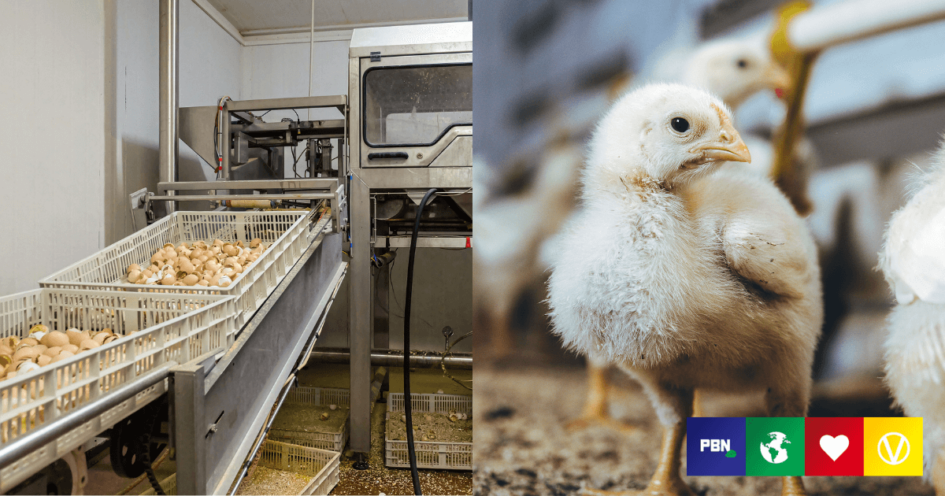 This article contains descriptions of animal abuse that might disturb readers.

An undercover investigation has exposed ‘horrific’ animal cruelty on a cage-free chicken hatchery in North Carolina.

Poultry farming and processing group Case Farms, and one of the top chicken producers in the US, operates the facility.

The facility processes more than 200,000 chicks per day.

The footage shows newly hatched chicks being mangled, trapped, or killed by equipment and machinery that was incompetently operated or set up.

Workers can be seen throwing the animals and dragging trays over their bodies, ‘crushing their throats’, Animal Outlook says. In the video, ‘horrifically injured’ chicks squirm and attempt to crawl across bloody trays alongside dead birds.

The hidden camera also captured chicks whose organs protruded from their feathers, exposed.

And, in some cases, employees throw fully conscious chicks into a macerator to be ground alive.

However, in other sectors of the food industry, this treatment is part of procedure.

In the egg industry, only female chickens are considered necessary since they are raised to lay eggs. Male chicks, on the other hand, are considered byproducts of the industry and are routinely macerated at around one day old.

Although even in the meat industry, the chicks who are raised for meat are typically slaughtered relatively young – at around 6 weeks old.

The footage shows the investigator reporting animal welfare issues to a supervisor. For instance, the activist alerted the supervisor that a mechanical piston was being accidentally lowered rapidly onto the chicks’ heads. However, the supervisor dismissed these concerns.

In another clip, a worker laughed about the chickens who fall out of their trays and are subsequently ‘flattened’ by moving vehicles.

It’s a far cry from Case Farms’ animal welfare commitments. “Case Farms has built its business on a commitment to ensuring the health and welfare of its chickens, which are raised cage-free,” the company writes on its website.

“The welfare of the animals under our care is of utmost importance,” it also says, assuring that the animals are not given hormones or steroids.

A whistleblower who had worked for the company revealed that hens were left to rot in cages alongside live birds. The source said that workers would ‘spin the birds around by their necks until their heads come off’.

Northern Farms, which operates the facility, brushed off the claims, attributing them to a ‘disgruntled employee’.