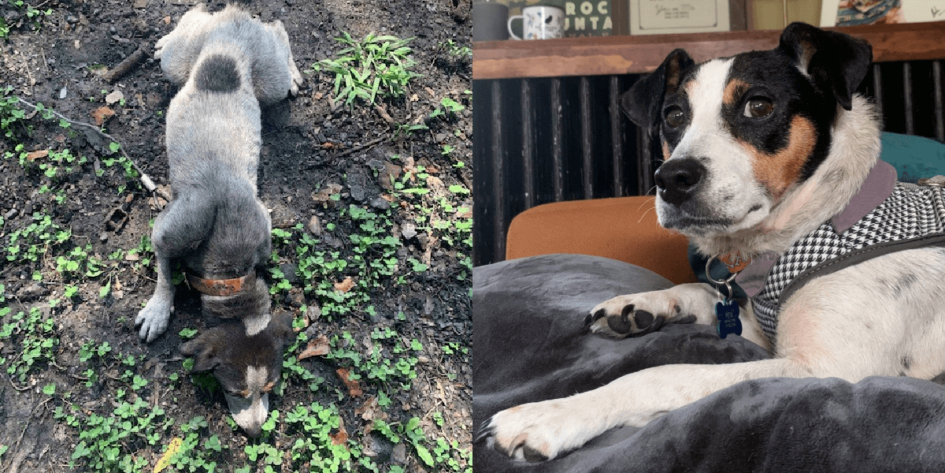 With a death toll that has surpassed 600,000 in the U.S. and keeps climbing, the COVID-19 pandemic has caused an incalculable amount of misery. But not included in the grim statistics is the suffering of thousands of animals who are left behind after their guardians succumb to the virus. Pancake is one of those collateral canine COVID-19 victims. Even before her owner died, Pancake’s existence had been one of constant isolation and despair. Her entire world, 24/7/365, was a patch of dirt in a backyard littered with trash. She was kept on a chain in all weather extremes, with nothing to do—no companionship, exercise, or respect. PETA fieldworkers had been visiting Pancake and two other dogs chained up alongside lawnmowers and junked cars at the rural North Carolina property for years, getting them spayed and giving them sturdy doghouses, straw bedding, and other basic necessities that they would otherwise have gone without. But it got even worse. After their owner died of COVID-19 in January, the dogs were simply left chained up behind the vacant house with rare check-ins from family members (one of whom lived over 300 miles away). Fieldworkers continued to visit the dogs after their owner’s death, knowing that they needed their help now more than ever. Our fieldworkers’ visits are the only reason that the dogs survived the ensuing seven months as they endured weather extremes ranging from winter snowstorms to sweltering summer heat waves while their water buckets became putrid with algae and the kibble in their automatic feeders turned into an inedible, moldy mush crawling with slugs and maggots. Our fieldworkers provided the dogs with fresh food and water as often as they could, but they knew the animals needed and deserved so much more. Our staff begged and pleaded with family members to let PETA take in the dogs, all to no avail.

But on our fieldworkers’ latest visit, they discovered that Pancake’s condition had severely deteriorated, so they took immediate action to secure legal custody of the dogs and remove them from that disgusting backyard for good. Pancake—so named by our field team because she’d had so little interaction with humans that she flattened herself to the ground upon their approach—was almost unrecognizable. Her white fur was the color of the toxic soot she had been rolling in near a burn pile, and the formerly plump dog was skeletal, having lost at least a third of her bodyweight. Crawling with fleas, her skin was raw and inflamed, and large patches of her fur were missing. Many of her teeth are worn down to the root, likely from frantically chewing at herself in an effort to relieve relentless itching. After years of sensory (and every other kind of) deprivation at the end of a chain, Pancake has to start from scratch at learning be a dog—everything from walking on a leash and meeting humans and other animals to navigating slippery floors and doorways. It took her over a week to muster the courage to attempt a short flight of stairs, which she has since conquered! But she is catching on and has already figured out that sitting on the sofa next to her foster mom is the very best spot in the house. As sweet as maple syrup, Pancake never stops wagging her tail. All she needs now is a special family that is ready to turn their home into the international house of Pancake. If you have a craving for a never-ending stack of canine devotion, flip open your phone and put in your request to gobble up Pancake at [email protected]. Find Out More About Pancake and Other Adoptable Animals