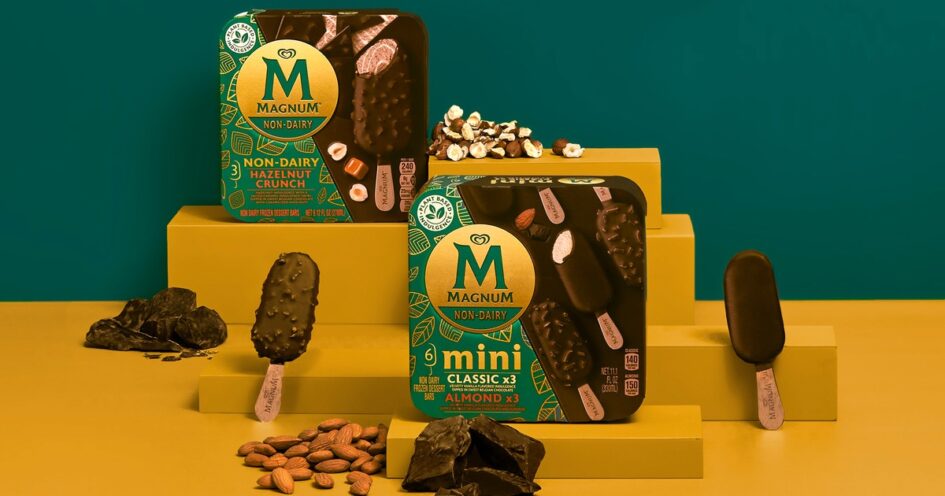 To kick off the new year, ice cream brand Magnum is expanding its dairy-free ice cream portfolio with exciting new options. First, the Unilever-owned brand will launch a new vegan flavor: Non-Dairy Hazelnut Crunch Bars. The new ice cream bars feature a hazelnut ice cream base with salted caramel swirled throughout, which is dipped in caramelized hazelnuts and non-dairy chocolate.

“Our award-winning Magnum ice cream Non-Dairy frozen dessert bars are made with Belgian chocolate, expertly crafted with a vegan cracking chocolate shell and a velvety non-dairy base,” Nicole Towner, the US Brand Manager of Magnum ice cream, told VegNews. “The new Magnum Non-Dairy bars deliver the indulgence expected from the chocolatiers of ice cream. Master chocolatiers source cocoa beans from Rainforest Alliance Certified farms and pair it with a deliciously creamy base made with a blend of coconut oil and pea protein, a delicious plant-based alternative to dairy.”

“We listened to Magnum ice cream fans who loved our award-winning non-dairy offerings and wanted to provide more indulgent options to choose from including the MINI bars and variety packs that are evolving into a popular snackable trend,” Towner said. 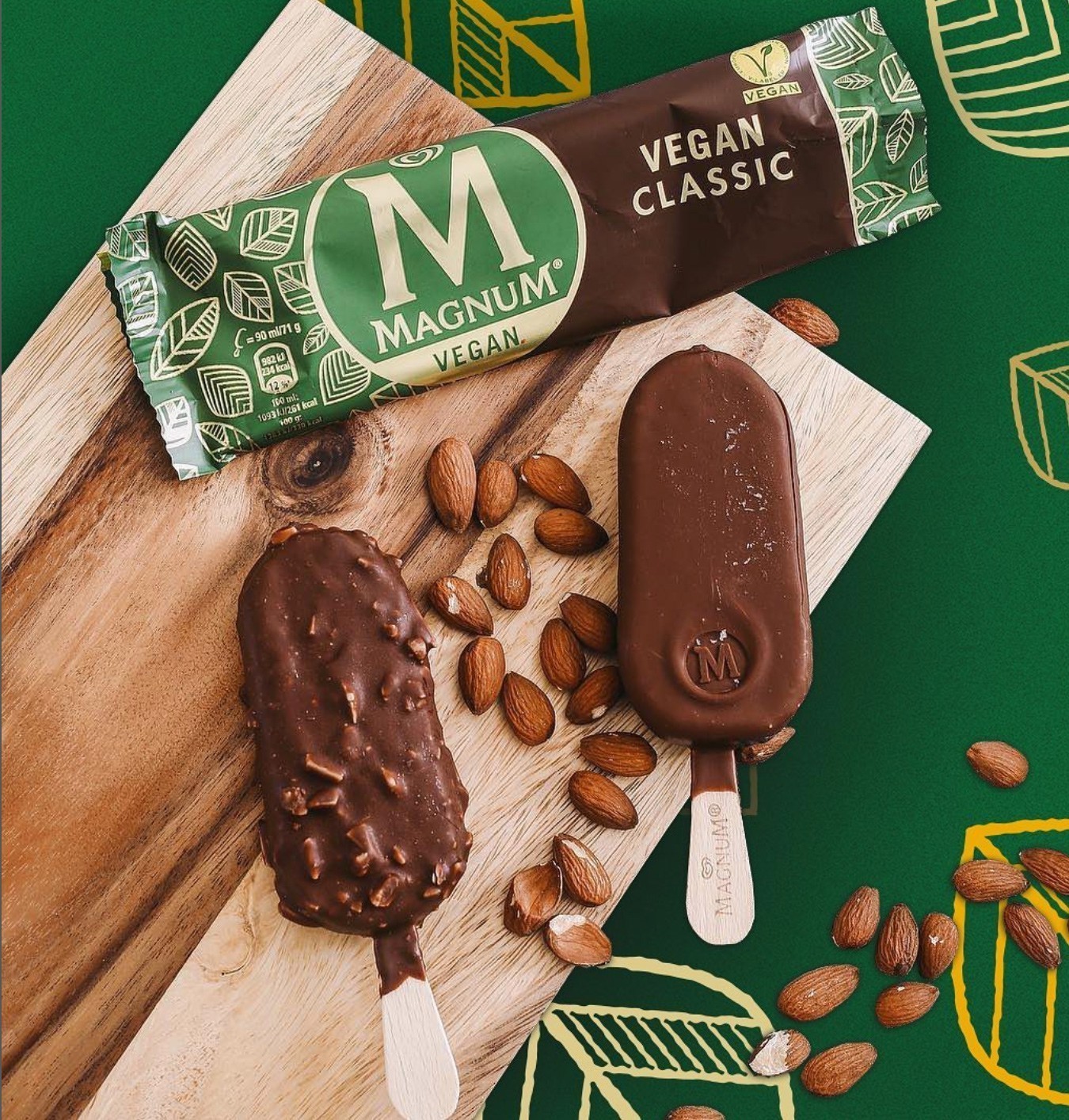 While Magnum launched in the US in 1989 as the first “adult” ice cream bar, its first vegan flavors were introduced in Europe and Australia. By 2019, Magnum brought its vegan ice cream bars to its home turf in Classic and Almond flavors. To give customers even more choice, the brand expanded its vegan offerings to include Non-Dairy Sea Salt Caramel bars.

“We believe everyone should be free to indulge in the lifestyle they choose, and that of course includes treats such as Magnum ice cream,” Towner said. “As we listen to our fans and continually release non-dairy ice cream offerings, we are providing more options for consumers to experience the indulgence of Magnum ice cream.” 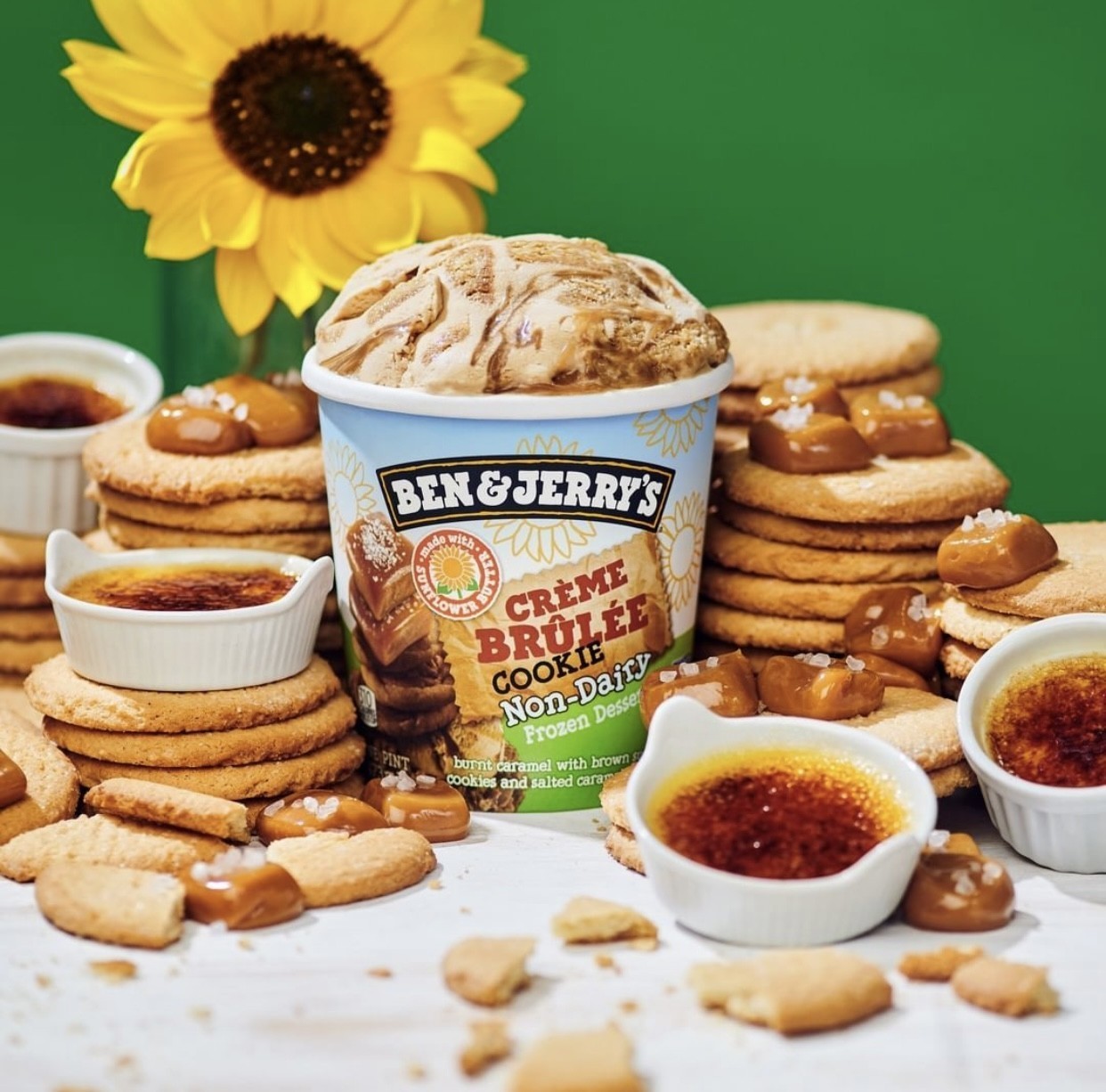 Since then, Ben & Jerry’s has launched new vegan flavors every year, recreating fan favorites such as Phish Food, Cherry Garcia, and Stephen Colbert’s AmeriCone Dream. In 2020, the brand developed an innovative sunflower butter base for its vegan ice creams and has since featured it in flavors such as Change the Whirled (made in partnership with social justice activist Colin Kapernick) and recently released Mint Chocolate Chance (developed with Chance the Rapper).

Chance the Rapper Got His Own Vegan Ben & Jerry’s Flavor