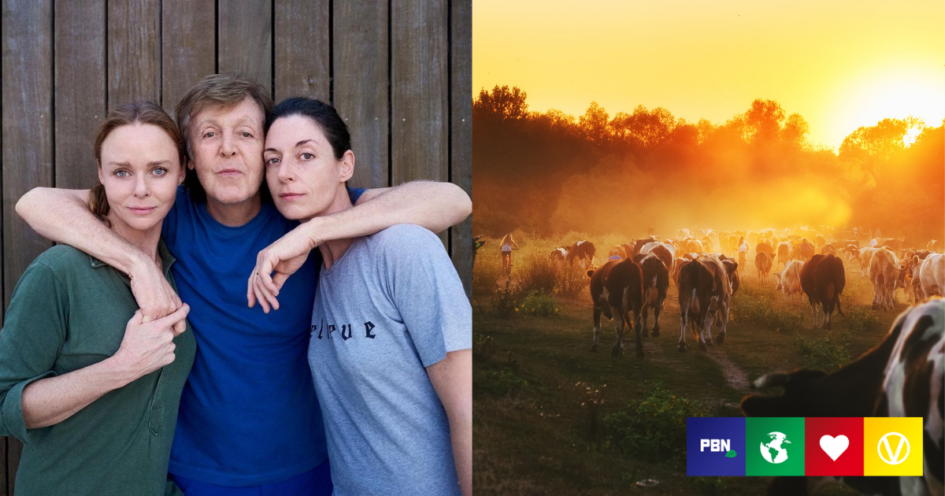 Several celebrities known for their animal advocacy efforts have joined calls for COP26 to endorse a plant-based extension of the Paris Agreement. The Plant-Based Treaty is a scheme hoping to tackle animal agriculture-caused environmental destruction. And now, it’s backed by Paul, Mary, and Stella McCartney as well as Joaquin Phoenix and Rooney Mara.

In a statement, the McCartneys said: “We believe in justice for animals, the environment and people. That’s why we support the Plant-Based Treaty and urge individuals and governments to sign it.”

The first-of-its-kind scheme expands on goals set in the Paris Agreement, which was first rolled out at a past UN Climate Change Conference. Its main aim is to reverse the damage caused by animal agriculture. This is from land degradation to deforestation and ocean dead zones.

We need urgent action on our food systems, it stresses, and it comes amongst criticism of the COP26 event.

Actor Peter Egan adds: “If we don’t reduce methane emissions we will lose our planet. Animal agriculture is one of the key contributors to methane and other greenhouse gas emissions, so we need to move to plant-based solutions. This is why I support the Plant-Based Treaty.”

Animal protection organization, In Defense of Animals, has also partnered with the Treaty.

In a statement sent to PBN, communications director Fleur Dawes said: “Animal agriculture is a major polluter yet leaders have largely ignored it. It’s time to get tough on ranching to reverse the devastating polluting effect it has on our planet. We urge secretary-general Guterres to remove dirty animal agriculture from our food systems.”

Moreover, a host of faith leaders co-signed a letter to COP26 president Alok Sharma. This was to highlight the importance of plant-based diets.

“The best approach to try to avert a climate catastrophe is through a societal shift toward plant-based diets,” they urge.

You can find out more about the Plant-Based Treaty here