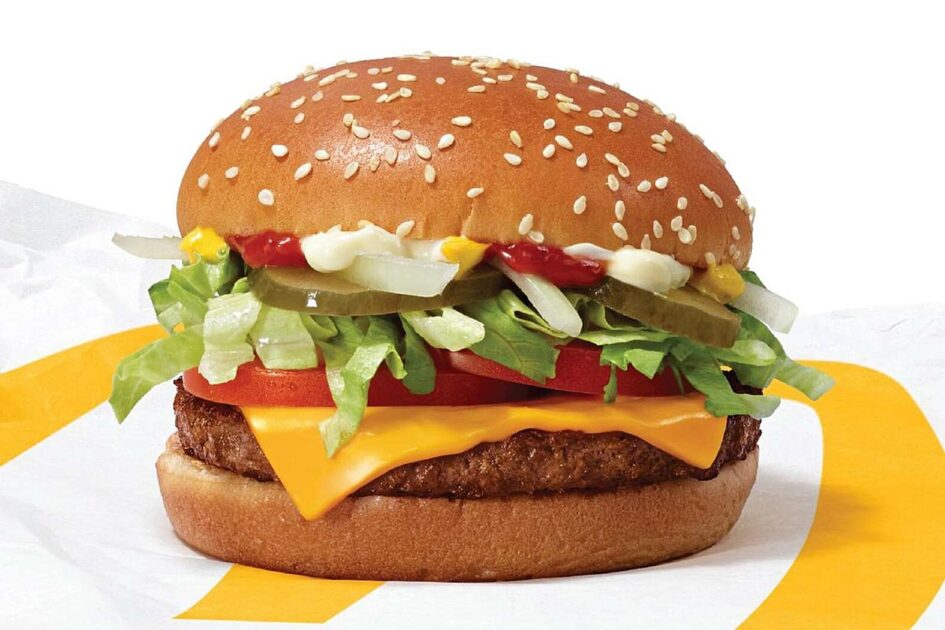 America’s most anticipated meatless burger is finally debuting across the United States. McDonald’s just announced that its first plant-based burger – the McPlant – will become available at select restaurants on November 3. Even though McDonald’s tested and launched the burger abroad, this marks the first time the plant-based burger made with Beyond Meat will reach US locations. The McPlant burger features a plant-based patty consisting of potatoes, rice, and peas topped with classic fixings including pickles, onions, tomato, lettuce, mayonnaise, ketchup, mustard, and a slice of American cheese.

“This particular test will help us understand how offering a burger with a plant-based patty impacts the kitchens in our restaurants,” McDonald’s stated in its announcement of the McPlant test in the US. “[The McPlant] has the iconic taste of a McDonald’s burger, because it is one.”

The McPlant will be available for a small-scale limited trial period. The international corporation announced that only eight McDonald’s locations will feature the plant-based burger. The select locations will be located in Irving, Texas; Carrollton, Texas; Cedar Falls, Iowa; Jennings, Louisiana; Lake Charles, Louisiana; Manhattan Beach, California; and El Segundo, California. There is currently no announcement for further distribution.

The partnership with Beyond Meat worked to develop a plant-based patty that would be perfectly designed for a classic McDonald’s burger. While the burger patty is completely plant-based, McDonald’s clarified that the mayonnaise and cheese will not be vegan, but the menu item can be ordered without either ingredient. The patty will also be cooked on shared surfaces with animal-based products.

The US debut closely follows the fast-food chain’s McPlant launch across the United Kingdom and Ireland. The company rolled out its plant-based patty in Coventry in late September before eventually distributing the new menu item across more locations in early October. While the US version does not feature full plant-based ingredients, the UK variation offered a vegan special sauce and vegan cheese in place of the dairy products. After earning the UK Vegetarian Society’s official vegan certification, there is a possibility US consumers could see the fully vegan McPlant Variation.

“We’re so pleased to be finally launching McPlant in the UK and Ireland. As with every McDonald’s offering, we take our time to ensure it meets the highest standards and is something that all our customers will enjoy,” Chief Marketing Officer at McDonald’s UK and Ireland Michelle Graham-Clare said during the release last month.“We are always looking for different ways to innovate and meet our customers’ needs, and with McPlant, we have a delicious plant-based burger that will appeal to everyone. Whether you’re vegan or just fancy a plant-based patty, we’re confident you will enjoy the McPlant.”

“We are proud to enter into this strategic global agreement with McDonald’s, an exciting milestone for Beyond Meat, and look forward to serving McDonald’s as they bring expanded choice to menus globally,” Beyond Meat CEO Ethan Brown said in a statement to VegNews. “We will combine the power of Beyond Meat’s rapid and relentless approach to innovation with the strength of McDonald’s global brand to introduce craveable, new plant-based menu items that consumers will love.”

Outside of the US, the McPlant has been tested internationally for months. Prior to the UK launch, the McPlant campaign focused on select locations including Denmark, Austria, and Sweden. The test locations featured a menu item similar to the US McPlant, which does not offer the vegan special sauce or dairy-free cheese. However, the Swedish McDonald’s branch felt optimistic about the partnership.

“McPlant offers a completely new taste experience, but still with the same iconic McDonald’s taste as usual,” Marketing Manager at McDonald’s Sweden Staffan Ekstam said. “Our herbal burger is for all our guests – both those who are eager to try something new and as an additional alternative for all the guests who today eat flexitarian.”

McDonald’s is late to enter a rapidly growing fast-food burger market. Rivaling fast-food companies such as Burger King and Fatburger partnered with Impossible Foods. Before partnering with McDonald’s, Beyond Meat released a plant-based patty with Carl’s Jr. The rise of plant-based burgers signifies a growing demand and acceptance of vegan variations at some of the most eaten food establishments in the world.