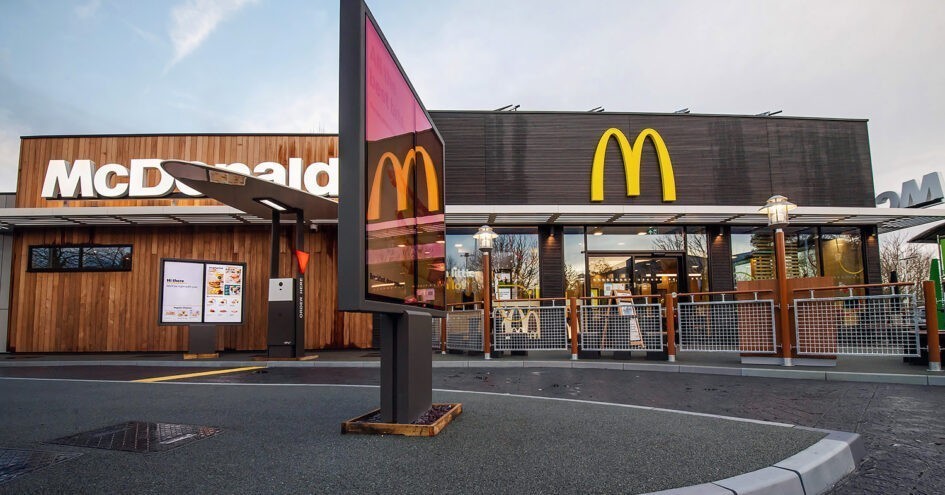 The Golden Arches are going green. McDonald’s has debuted its first net-zero emissions restaurant complete with a drive-thru lane made from old car tires.

The restaurant is nestled in the town of Market Drayton in Shropshire, England. Recycled materials were largely used in the building’s construction. Its cladding is composed of recycled computer equipment, while its restaurant chairs are made from recycled plastic bottles.

The restaurant is powered by renewable energy via wind turbines and solar panels, and signs and art made from recycled coffee beans and styrofoam cups, respectively, hang on the walls. The restaurant even has a nature trail and garden designed by children from a local school to promote biodiversity and provide a habitat for wild animals.

​​”We’ve already started to roll out some of these innovations to other restaurants,” Beth Hart, a McDonald’s spokesperson, explained. “But what is exciting about Market Drayton is the fact it will act as a blueprint for our future new builds.”

The net-zero restaurant is part of McDonald’s larger commitment to the planet. In September, the company pledged to make its Happy Meals more sustainable. It plans to reduce its virgin plastic use by 90 percent by 2025. In October, the hamburger chain announced its plans for reducing its global greenhouse gas emissions, outlining its goal of going net-zero by 2050.

​​”We’re trying to send a signal to our partners, to our investors, to our suppliers, to other brands in the global community, to policymakers, that we share that vision for 2050,” the company’s Chief Sustainability Officer, Jenny McColloch, told Reuters.

In the UK and Ireland, the chain hopes to achieve net-zero emissions by 2040. The UK’s new, net-zero location is a big step forward for the world’s largest fast food chain in terms of its plans of curbing emissions. But is it enough?

According to a recent study by the Mirror, a Big Mac has the same carbon footprint as approximately eight miles driven in a car. About 80 percent of its total emissions come from its supply chain, particularly its use of meat and dairy products—it is one of the biggest buyers of beef in the world.

According to the United Nations’ Food and Agricultural Organization, the meat and dairy industries produce 14.5 percent of the world’s greenhouse gas emissions. “Beef is a big opportunity to help drive impact in the world with our farmers and rancher partners,” McColloch explained.

In September, McDonald’s debuted its plant-based McPlant burger in the UK. Two months later, select locations in the U.S. began trailing the meatless burger. While the company doesn’t plan on taking meat or dairy off of the menu any time soon, more vegan options could be on the way.

“I can’t speculate on what the McDonald’s menu will look like in the future, but I think it will look very different,” Hart explained. “We might see more plant-based items on the menu. It’s not so much about influencing choice but offering alternatives.”

This Zero-Waste Vegan Restaurant Is the Place to Visit in Oceanside, CA