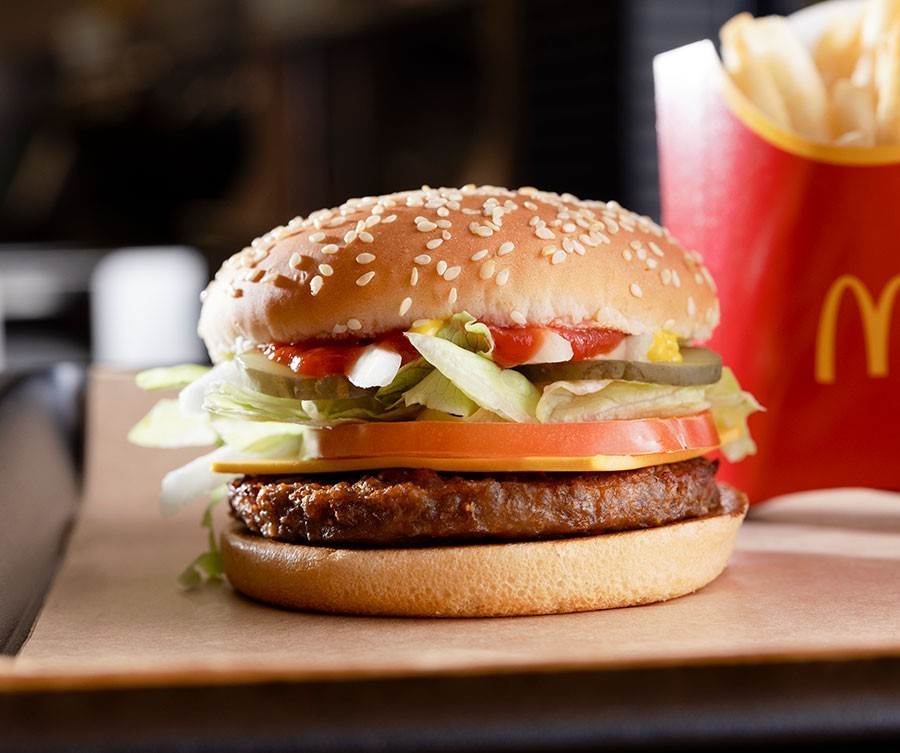 McDonald’s has been teasing us with the McPlant burger for quite some time now. And now, it’s finally making its debut in the UK and Ireland.

The American fast-food chain has been trialling the McPlant burger in select locations across Sweden and Denmark to gain customer insight before rolling it out to more locations.

However, there’s one major difference with the UK version of the McPlant Burger – it’s made with a bespoke vegan cheese and cheese sauce!

According to the company, the vegan cheese is made from pea protein and ‘tastes just like McDonald’s iconic cheese slices.’

In fact, it will even be cooked separately from other McDonald’s burgers and sandwiches using dedicated utensils to ensure peace of mind for vegan customers.

Moreover, the McPlant burger will be priced at £3.19 – the same cost as the chain’s popular Big Mac beef burger.

McDonald’s and Beyond Meat

The fast-food chain has teamed up with vegan meat giant Beyond Meat to offer a plant-based patty that ‘delivers the same great taste and experience you would expect from a McDonald’s burger’.

Beyond Meat signed a 3-year global contract with the fast-food chain earlier this year, indicating big changes on the horizon.

Founder and CEO of Beyond Meat Ethan Brown commented: “We will combine the power of Beyond Meat’s rapid and relentless approach to innovation with the strength of McDonald’s global brand to introduce craveable, new plant-based menu items that consumers will love.”

Where to buy the McPlant burger in the UK and Ireland

McDonald’s will be trialling the new McPlant burger in 10 restaurants in Coventry from 29th September ahead of its roll-out to a further 250+ stores nationwide in January.

You can find the full list of McDonald’s restaurants offering the McPlant burger at mcdonalds.co.uk/mcplant.

In a statement sent to Vegan Food & Living, Michelle Graham-Clare, Chief Marketing Officer, McDonald’s UK and Ireland said: “We’re so pleased to be finally launching McPlant in the UK and Ireland.

“We are always looking for different ways to innovate and meet our customers’ needs, and with McPlant we have a delicious plant-based burger that will appeal to everyone. Whether you’re vegan or just fancy a plant-based patty, we’re confident you will enjoy the McPlant.”

If this news has got you craving burgers, making your own with our favourite vegan burger recipes!