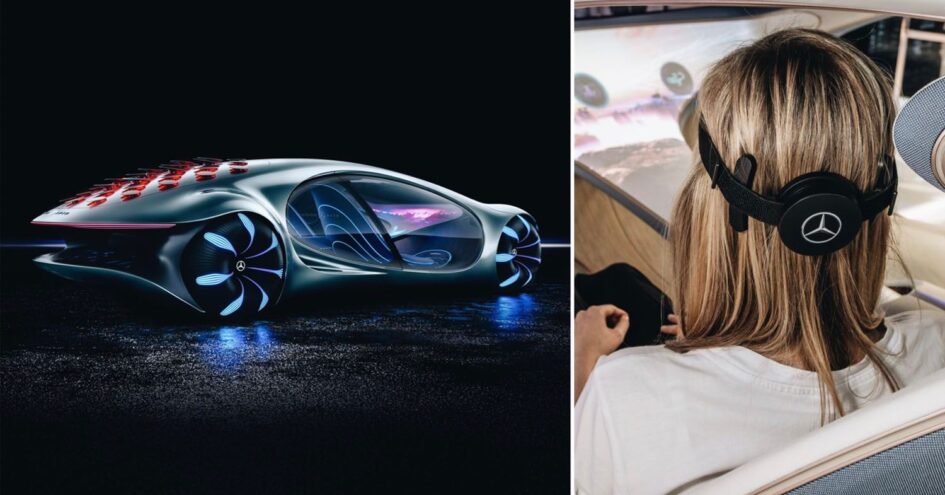 Push to start, move aside. Think to start may be the next form of keyless entry. With its latest concept car, the Vision AVTR, Mercedes-Benz is making mind-controlled vehicles a reality.

The German automaker is showcasing its concept car at the IAA Mobility car show in Munich, which runs from September 7-12. Mercedes first unveiled the concept car at the 2020 Consumer Electronics Show in Las Vegas. But this time around, the car manufacturer’s mind-control technology is front and center.

Using a brain-computer interface, or BCI, the driver can control everything from the car’s radio station to its navigation system—all by using their mind. The computer-based program features a head-worn device that analyzes brain signals to trigger the desired function.

“Mercedes-Benz is setting another milestone in the merging of man and machine with the research and development of brain-computer interface applications in cars,” said Britta Seeger, Member of the Board of Management of Daimler AG and Mercedes-Benz AG.

“BCI technology works completely independently of speech and touch,” Seeger added. “This opens up revolutionary possibilities for intuitive interaction with the vehicle.”

Mercedes’ Vision ATR sports a 110-kilowatt-hour electric motor. It can produce more than 469 horsepower and an electric range of more than 435 miles.

The vehicle’s appearance—both exterior and interior—is just as, if not more, futuristic. It features sustainable materials, including vegan leather made from recycled materials. Instead of a steering wheel, the driver simply places their hand on a center console control that responds to heart rate.

In a nutshell, the concept car looks like something straight out of the 1982 science fiction film Tron. Or, more accurately, the 2009 sci-fi flick Avatar—because it actually is. Disney and Mercedes collaborated to create the concept car. Avatar’s director, James Cameron, even introduced the Vision AVTR at the 2020 show in Las Vegas.

Although BCI is still in its infancy, the technology is nothing new. It’s long been a focal point in the medical field to help people with severe disabilities.

According to the Alliance of Advanced BioMedical Engineering, the BCI technology industry is worth more than $1 billion. The healthcare sector is responsible for the largest share of the market at 52 percent.

IAA Mobility visitors will be able to try out Mercedes’ BCI in real-time. “BCI technology can make it possible to relieve the user even more in order to be able to focus on the driving experience,” said Markus Schäfer, Member of the Board of Management of Daimler AG and Mercedes-Benz AG. “This concept vehicle impressively depicts the future of mobility in which man, nature and technology are in harmony with each other.”

A Puzzle for Your Mind, Body, and Spirit