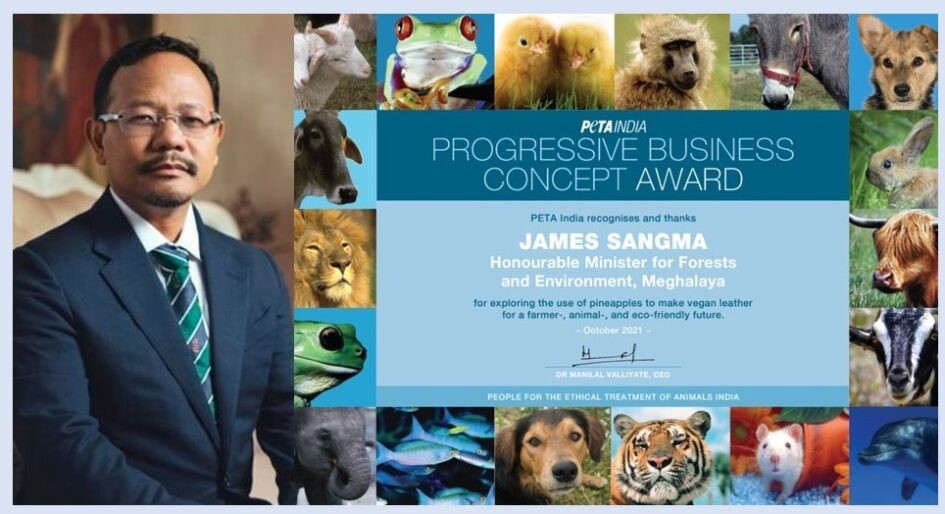 Taking a step towards sustainability and animal welfare, Meghalaya’s minister for forests and environment, James Sangma is planning to boost pineapple leather production in the state, utilising the enormous waste generated by the flourishing pineapple trade.

This move will not only help local farmers by providing them new employment opportunities but will also help protect the environment, and animals used for the production of conventional leather.

Recognizing Sangma’s efforts, People for the Ethical Treatment of Animals (PETA) India is conferring on him the ‘Progressive Business Concept Award’. Under his leadership, the state is also planning to open a climate change museum and introduce climate change into school curricula.

“PETA India looks forward to seeing Meghalaya create new opportunities for farmers while helping to save the planet and animals’ lives through a thriving pineapple-leather industry.”

According to the United Nations, animal agriculture – which includes animals killed for clothing – is responsible for nearly a fifth of human-induced greenhouse-gas emissions. To keep the skins of cows, buffaloes, and other animals used for leather from rotting, tanneries use a variety of caustic, toxic chemicals, which pollute waterways. One of the most widely used chemicals in the tanning process is chromium, which can cause cancer in workers exposed to it.

The leather industry also causes animal suffering on a massive scale. Cattle used for leather in India are often crammed into vehicles in such large numbers that their bones break. Those who survive the gruelling journey to the slaughterhouse endure agonizing deaths: their throats are cut in full view of other animals, and many are dismembered while they’re still conscious.