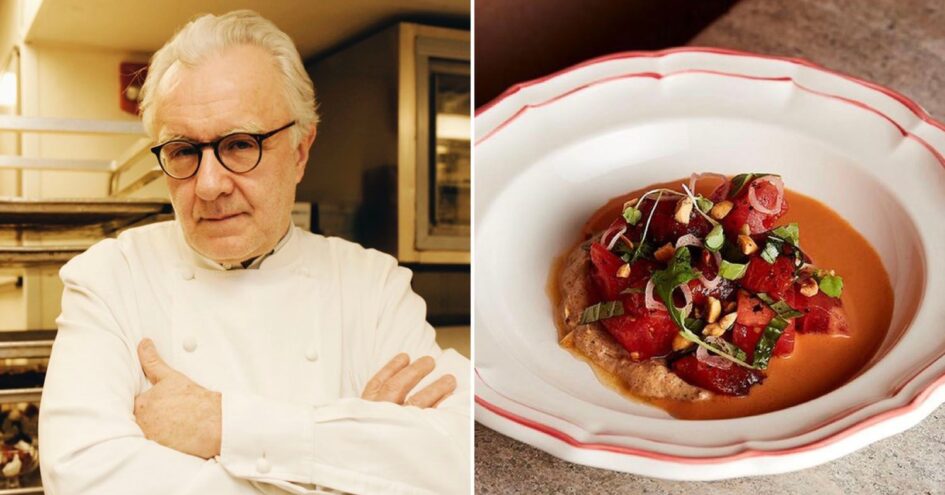 Located in the east of the French capital, Sapid’s menu is vegetable-forward, with very few animal products on offer. (Five percent of the offering features eggs, cheese, and fish. The other 95 percent is plant-based.)

Ducasse says the environment inspired the move, but also diners’ changing appetites. People aren’t so interested in meat products now, the renowned Monégasque chef  — who has no less than 21 Michelin stars and runs 30 restaurants in and outside of France — told France Info.

“What has changed is the attention paid to how we eat better. Both men and women are careful about their health,” he said. He added that he also wants to be careful of the planet and “its scarce resources.”

At Sapid, customers can expect to find dishes like tomato and watermelon salad with hazelnut praline and lentil bolognese with steamed carrots. The dessert menu includes poached yellow peaches with hemp tofu. All are served in a refectory-like setting at reasonable prices for the quality of the food. (The most expensive main on the menu is €14.)

“It was natural that we should be able to demonstrate that it is possible to create a restaurant where only plants are the reference,” Ducasse added.

In June, executive chef Daniel Humm turned 3-Michelin Star New York City restaurant Eleven Madison Park totally plant-based, save for milk and honey. Like Ducasse, a concern for the planet inspired the switch. Humm said: “It was becoming ever clearer that the current food system is simply not sustainable.”

Last month, French chef Dominique Crenn (the first woman in the U.S. to gain three Michelin stars) revealed she would add meat to the menu at her pescatarian San Francisco restaurant Atelier Crenn, but not in the conventional sense. The chef partnered with Upside Foods to add cultured chicken to the menu when it receives regulatory approval. She said: “I think this is the future.”

And in Los Angeles, Michelin Star chef Josef Centeno is moving away from dairy cheese. His Tex-Mex restaurant Bar Amá uses So Delicious vegan cheese in many of its dishes, and Centeno believes more chefs should follow suit. He said: “You’ll see that you can give your guests more options that still deliver great flavor and texture guests will love.”