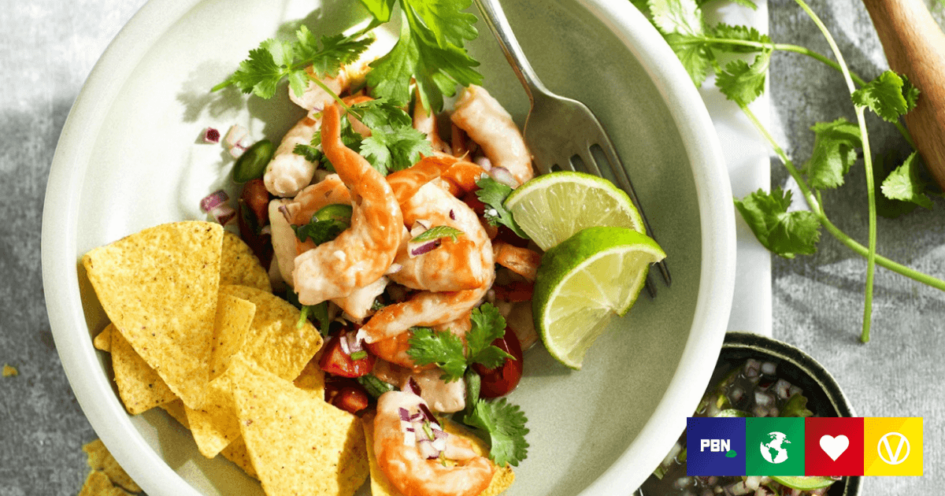 The largest food company in the world, Nestlé, has expanded its plant-based offerings. The company has debuted vegan egg and shrimp under its Garden Gourmet brand.

The new launches are part of Nestlé’s mission to provide products ‘that are good for them and good for the planet’, a press release says.

R&D experts at Nestlé Research in Switzerland and the R&D Center for culinary food in Germany created the vegan options.

The plant-based egg, Garden Gourmet vEGGie, is made with soy protein. It contains omega-3 fatty acids and achieves a Nutri-Score A in Europe. Like conventional eggs, the product can be scrambled, used in pancakes, or as an ingredient in baking.

Nestlé’s new vegan shrimp, Garden Gourmet Vrimp, is made from a blend of seaweed, peas, and konjac root.

The ‘Vrimp’ is a source of fiber, has a Nutri-Score B in Europe, and mimics the taste and texture of real ‘succulent’ shrimps, the company says. It joins the brand’s existing vegan tuna product, which is available in Germany, Italy, the Netherlands, and Switzerland.

Stefan Palzer, Nestlé Chief Technology Officer, commented: “Our new plant-based shrimp and egg alternatives have an authentic texture and flavor, as well as a favorable nutritional profile which makes them a good replacement for animal-based shrimp and eggs in a wide range of dishes.

“Our longstanding expertise in plant, protein and nutritional sciences enabled our teams to develop these great innovations in under a year. As we speak our R&D teams are already preparing the next wave of plant- based launches.”

Nestlé’s meat-free options have proven popular so far. At an event held in London today, CEO Mark Schneider said the company’s vegan burgers and sausages are seeing double-digit sales growth. He added that it’s ‘not limited to one particular age group or one particular demographic group’.

“This is really getting mainstream and broad based,” he said. Schneider later added that Nestlé’s overarching goal is to provide a plant-based protein to ‘replace every animal protein out there’.

Nestlé will trial the new egg and shrimp across a limited number of European markets, including Switzerland. The company has not yet announced exactly where they will be available.

Nestlé has attracted criticism over the years, with many claiming it uses unethical supply chains and practices. The company has been accused of using child labor, unethical water mining, and causing severe deforestation.

At today’s event, Plant Based News Director Robbie Lockie asked Schneider about the company’s plan for winning back consumer trust.

“As a principle, the only way to get trust is to earn it,” Schneider said. “And there’s no shortcuts there. And I think you have to know that over time, with good and honest and convincing products. And then also corporate behavior that people feel good about and that’s something we’re deeply committed to.”

He continued: “That’s why, for example, it was so important, especially here for a vegan community that we are crystal clear on the ingredients, and that, you know, the ingredient list is short and it’s very basic natural ingredients.”

He noted that there’s no artificial flavoring in the new vegan shrimp. “And still, you know, you’ll find out later how close it is to the real thing,” Schneider said. He added that ‘engineering’ a product with ‘fancy chemistry’ would be counterproductive to gaining consumer trust.