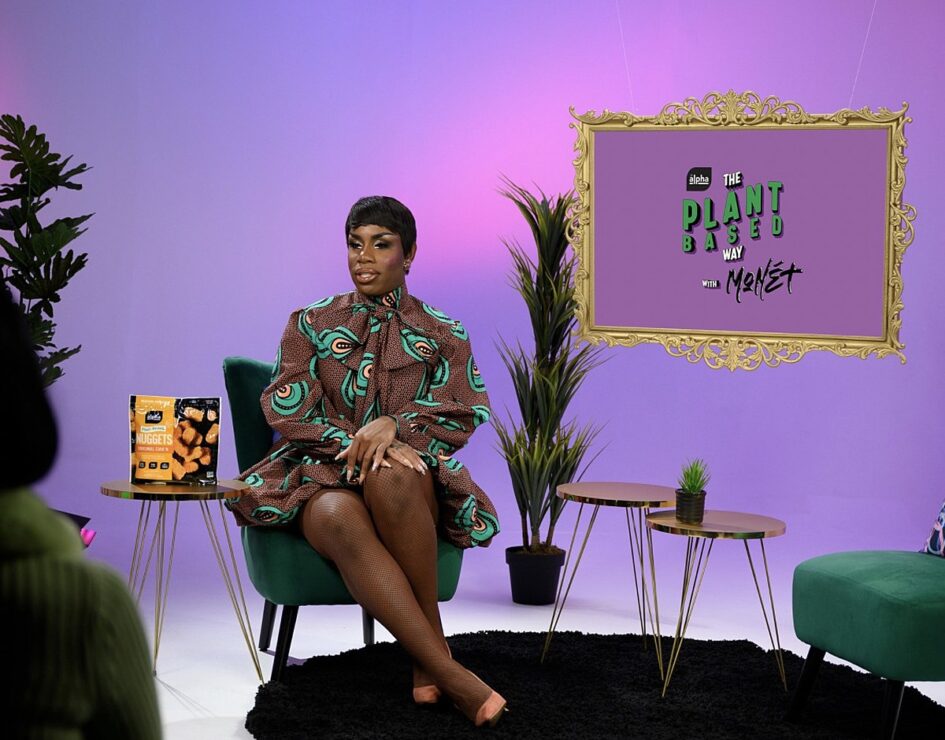 American drag queen Monet X Change will star in a brand new show all about plant-based living. The RuPaul’s Drag Race alum just revealed that she will host a weekly talk show dealing with plant-based foods, vegan living, and health in partnership with Alpha Foods. Debuting on Youtube this week, The Plant-Based Way With Monet will discuss a variety of hot topics and invite several celebrity guests with the aim of encouraging people to adopt a more plant-forward diet.

Monet’s new talk show will tackle subject matter including plant-based foods, wellness, sustainability, and health, providing people a necessary gateway into vegan and plant-based living. The 32-episode series will premiere on February 23 with episodes dropping weekly in an effort to open viewers’ minds to a more planet-friendly style of eating and living. The show will be exclusively available on the Alpha Foods Youtube channel.

“This series isn’t about meat bashing,” Monét said. “It’s about inviting everyone to the conversation, no matter where they are on their plant-based journey. I hope THE PLANT-BASED WAY WITH MONÉT helps open minds to the fact plant-based eating can be fun, easy, and above all, absolutely delicious!”

Every week, Monet will invite a new celebrity guest to talk about plant-based foods. During the inaugural episode, Money will be joined by the vegan chef Charity Morgan to talk about her new vegan cookbook Unbelievably Vegan and her personal plant-based journey. Other guests include drag queen Alaska Thunderf*ck; Jackie Beat – the drag persona of actor Kent Fuher; and model and fashion designer Isis King.

Monet decided to start eating plant-based when she moved to Los Angeles and felt that conversations regarding food were poisoned by judgment. The star decided to adopt a “flexitarian” diet inspired by Alpha Foods, believing it to be the most accessible entry point to vegan eating. Since then, Monet and Alpha Foods have fostered a relationship that resulted in the new, innovative plant-based talk show.

“We are so excited about this collaboration with Monét,” Alpha’s Chief Marketing Officer Kierstin De West said. “We couldn’t have found a better ambassador for the kinds of conversations we want to start about plant-based eating. Alpha is committed to making plant-based food accessible to all, with no judgment – whatever their meal mood and wherever they are on their plant-based food journey.”

Alpha Foods recently released a survey conducted with Harris Poll that found that two-thirds of Americans say that plant-based is the future of food. The study also noted that 83 percent of plant-based food eaters plan to continue eating vegan, vegetarian, or flexitarian in the coming years. The study signifies a growing need for conversation concerning vegan and plant-based dieting. Between Alpha Foods and Monet, the company believes that the talk show will cater to a new generation of plant-based consumers.

The vegan food brand continues to emphasize that it wants plant-based and plant-forward eating to feel accessible to all consumers. The company hopes that alternative meat can be for when a meat eater doesn’t want meat, not necessarily exclusively for vegans. Through the new video campaign, Alpha Foods hopes to encourage people to try plant-based and vegan living without feeling intimidated by rules or stereotypes.

“We believe that no matter if you’re a vegetarian, a pescatarian, a lacto-ovo-choco-taco-tarian, or just a plain ol’ fooditarian, anyone can enjoy Alpha plant-based products without any of the strings attached,” Alpha Foods’ website reads. “That means you can have a big juicy burger one night and a plant-based burrito the next, no eyebrows raised, no titles given, all health and environment benefits included. No matter what you eat, when or why you eat it, all eaters can enjoy Alpha.”