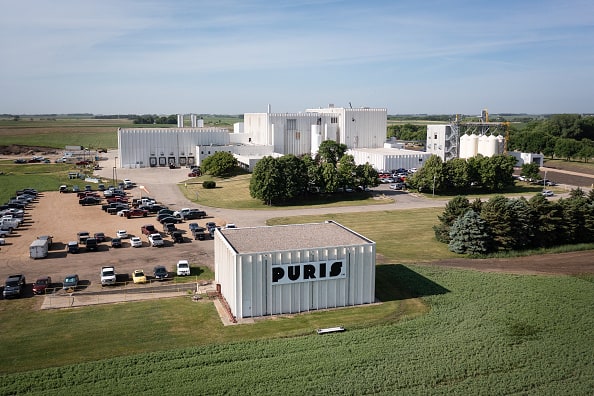 , the leading supplier of pea protein in North America, has officially opened its new production plant in Dawson, Minnesota. The facility will more than double the company’s production capacity.

, the opening of the plant means that PURIS now has the only vertically integrated, multi-plant pea protein production model in the U.S. It should enable the company, which has notable clients such as Beyond Meat, to supply half of North America’s demand for pea protein.

The new facility was made possible by investments, including significant funding from . PURIS also received last year.

The opening of PURIS’ 200,000 square foot plant is timely, as there are increasing concerns about shortages of pea protein. This year, Canada’s worst drought in decades led to a 45% drop in pea production in the country, while in France, crops were damaged by unusually wet weather.

This has led to a surge in prices, with warnings that the increases will inevitably be passed on to the consumer if things do not improve. But PURIS’ new facility could help to mitigate these shortages.

“This is more than a pea protein processing plant. We’re shaping the future of food,” said Tyler Lorenzen, CEO of PURIS Proteins. “The model we’ve built puts sustainable partnerships in reach for brands of all sizes. There’s impact at every level — it supports a local economy here in Dawson, introduces peas as a revenue stream for farmers, makes more plant-based foods available to consumers, and ultimately brings us one step closer to a sustainable food system.”