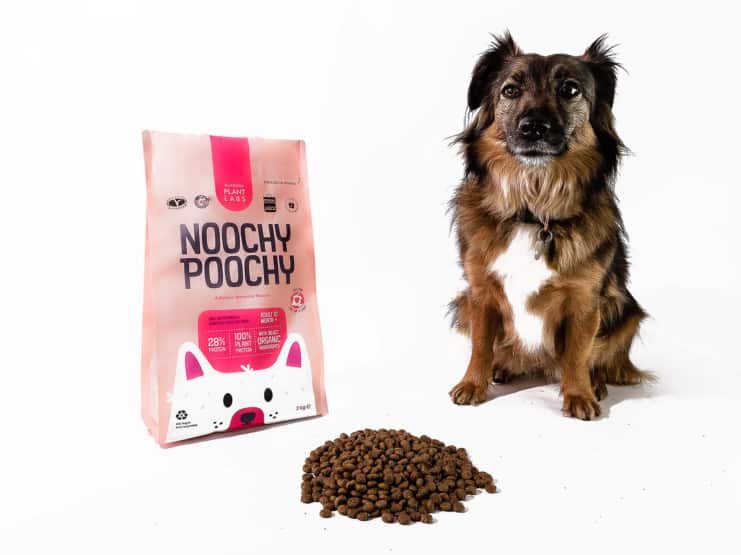 New vegan pet food brand has declared its intention to revolutionize the plant-based market with its new complete vegan formula. With the brand’s name coming from its use of nutritional yeast – known as ‘nooch’ – the brand claims its food has the most comprehensive nutrition profile on the market.

“D3 is usually obtained from sheep’s wool, but we found a cutting edge producer making it from algae”

Formulated by a vegan vet and an animal nutritionist, the Noochy Poochy vegan dog food contains select organic ingredients, a 28% protein content – higher than most meat-based dog foods according to the brand – and an omega fatty acid 6:3 ratio of 4 to 1, as well as amino acids L-carnitine, DL-methionine, and taurine. The brand has achieved accreditation from The Vegan Society, PETA, and The Ethical Company Organisation, amongst others.

Noochy Poochy arrives on the scene at a busy time in the plant-based and meat-free dog food segment. Consumers are becoming increasingly aware of dog’s ability to thrive on a vegan diet, with producers seeing success around the world, including and in North America, in Europe, as well as cultured pet food innovator , and fellow UK brands and .

“One of the biggest dilemmas we faced when creating a plant-based formula was around vitamin D3 which is needed to ensure a ‘complete’ dog food. D3 is usually obtained from sheep’s wool, but we found a cutting edge producer making it from algae. We wanted to test the D3 fully, to ensure it remained stable in our formula, and we’re delighted to say the results came back positive and we can now state with confidence that we’re one of the only fully vegan dog foods on the market,” explained Lucy McKinna, Noochy Poochy Founder.