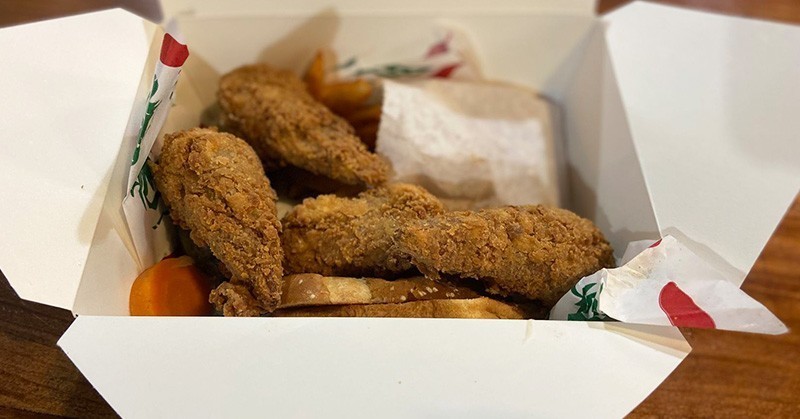 The vegan options in Dallas just keep getting better and better! Leading the charge is Desperados, a new vegan ghost kitchen that will be serving up homemade plant-based fried chicken.

If you’ve ever looked for vegan options in Dallas, you’re undoubtedly familiar with El Palote Panaderia, an authentic vegan bakery and taqueria on Buckner Blvd that has become a cherished part of the Dallas vegan community. The Arias family—owners of El Palote Panaderia—are the owners and masterminds behind Desperados, the new ghost kitchen that will be serving up vegan fried chicken downtown.

The recipe for the vegan fried chicken was developed by the Arias family over the long quarantine, and there has been a lot of hard work put into the recipe. The fried chicken is soy-based and comes wrapped around a bamboo drumstick to create the feel of eating “real” fried chicken. The breaded seasoning is perfection, and the texture of the vegan chicken is so rich and meaty that it will have non-vegans asking “Wait, this isn’t meat?”

The vegan fried chicken will come in a box loaded with seasoned fries and a variety of peppers. Want to kick it up a notch? There will be a diablo option for those looking for a little crunch with a big kick.

As soon as all the permits are in, the ghost kitchen will start operating out of a space on Commerce Street downtown. Customers will be able to order for pickup or delivery through Uber Eats, DoorDash, and Grubhub. In the meantime, folx looking for vegan takeout options in Dallas can head to El Palote Panaderia on the weekends to try the fried chicken as a special.

Give @elpalote.vegan a follow on Instagram for updates on when the new Desperados ghost kitchen is set to open (and for drool-worthy pictures of tacos, pan dulce, and tamales!).