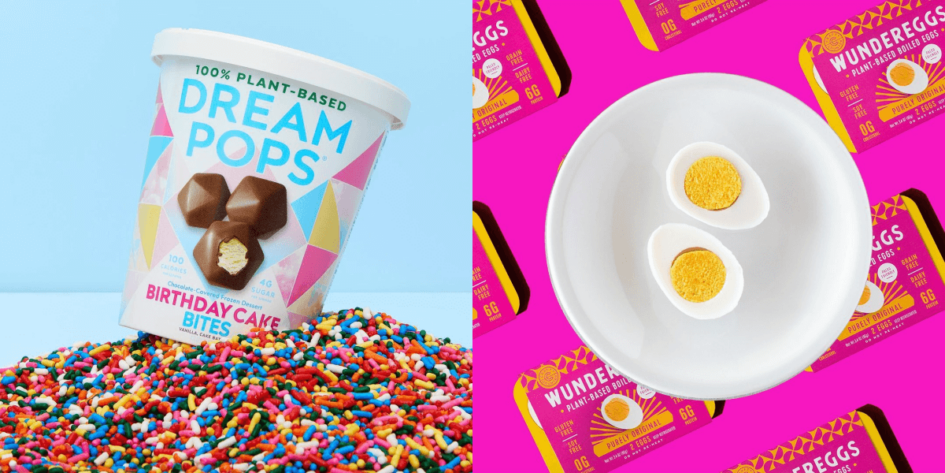 The vegan food boom really can’t be stopped—each year, more new and exciting vegan products are launched. We’re always looking to try the next big thing in vegan food, since more options mean more opportunities to prevent animals from suffering on factory farms. Tons of brands are realizing that plants are the future and are creating products that are kind to animals and better for the planet.

Keep an eye out for these vegan products as they hit shelves near you:

This grillable, halloumi-inspired vegan cheese is a favorite in Europe, and Violife is finally bringing it stateside this year. Char it on the grill and top your favorite salad with it, or layer it in a veggie sandwich. Its mild flavor also makes it perfect for marinating in your favorite Greek-style vinaigrette.

Miyoko’s liquid mozzarella is truly a game changer. Simply pour it on top of your favorite crust and watch as it bubbles and browns in the oven just like cow’s milk cheese but without harming cows.

Nature’s Charm already makes a delicious sweetened condensed coconut milk, but this oat milk–based version is another great option for your baking needs.

Everyone’s favorite spud just became even more versatile. This vegan milk from Swedish brand DUG is available in three options: Original, Unsweetened, and Barista. Why potatoes? They have a mild flavor and are even more sustainable than oats or soy.

Another new plant-based milk is made from pumpkin seeds, which pack a lot of nutrition and taste delicious.

Vegan brand Beyond Meat launched its new crispy, juicy vegan chicken tenders in stores and restaurants, and the product is sure to be available in more places soon. The brand also debuted vegan orange chicken at Panda Express, a sell-out collaboration that will definitely lead to further partnerships. We’re looking forward to seeing what Beyond Meat has in store for 2022.

Oscar-winning documentary My Octopus Teacher showed just how sensitive and intelligent cephalopods are, and their squid cousins are a lot alike. Instead of eating these individuals, try this vegan calamari from Nature’s Charm. It’s made of king oyster mushrooms that have been marinated in a salty seaweed brine.

In 2021, Seaspiracy helped more people become aware of the truth about the commercial fishing industry, so it makes sense that 2022 would bring more vegan seafood products to the market. Vegan Zeastar has already launched its delicious vegan tuna, salmon, and other products in some U.S. stores, but we’re sure the company will expand its products to even more locations in the new year.

The classic veggie burger is making a big comeback in 2022. The Actual Veggies burgers are made with—you guessed it—actual veggies. We love a good Beyond Burger, but sometimes a classic veggie burger hits the spot. Try one of four flavors, made from beets, sweet potato, kale, or black beans.

Vegan chicken is a crowd-pleaser, and we’re sure we’ll be seeing even more options on the market and at fast-food chains in 2022. Rebellyous Foods is a new brand bringing juicy, crispy breaded vegan tenders, nuggets, and chicken patties to grocery stores on the West Coast.

Bacon made from seaweed? That’s what UMARO brings to the table. This crispy, smoky vegan bacon will be available in three flavors: Original, Maple Bourbon, and Hickory Smoke. Pigs are social, playful individuals who love to relax in the sun. In the pork industry, they are often kept in cramped, awful conditions and are killed before they’re ever able to experience the fulfilling lives they deserve.

This German company is using fava beans to make vegan liquid eggs that cook to fluffy perfection—all without forcing hens to produce eggs.

Ice cream brand Ben & Jerry’s is often adding new delicious options to its nondairy lineup. This collaboration with Chance the Rapper features a mint-flavored sunflower milk base with chunks of chocolate brownies and will be on shelves in early 2022.

Dandies has been known for years for its gelatin-free vegan marshmallows, and now the brand is planning to launch a marshmallow cream. Relive your childhood dreams with a peanut butter and marshmallow sandwich while resting easy knowing that no cows, pigs, or fish had to die for it.

Miss Universe Urges Everyone to Go Vegan to Save the World