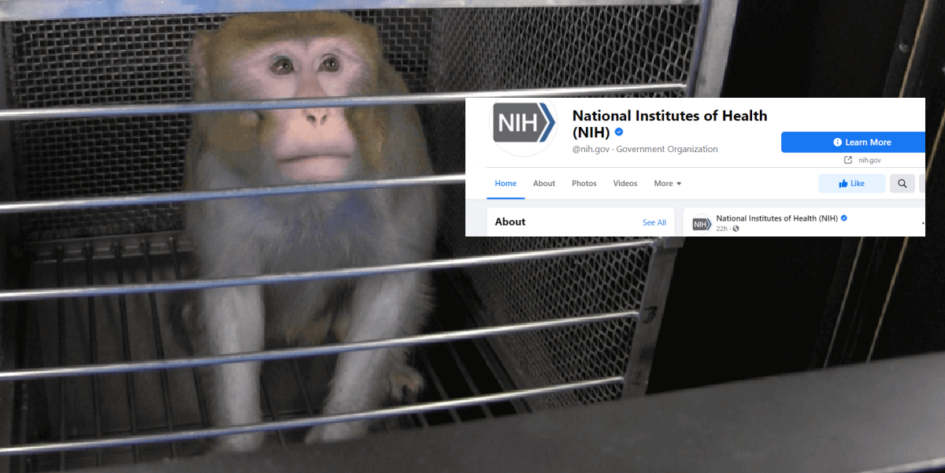 The National Institutes of Health (NIH) has tried to conceal the suffering in its laboratories before, but in attempting to silence the public, it has reached a new low. After discovering that NIH and the U.S. Department of Health and Human Services (HHS) have been using keyword filters to block comments potentially critical of the agencies’ support of cruel experiments on animals—either funded or conducted by NIH—PETA is suing them for violating the First Amendment.

PETA Asks NIH: ‘Why So Secretive?’

PETA—along with the Knight First Amendment Institute at Columbia University and the Animal Legal Defense Fund—filed the lawsuit on behalf of animal rights advocates, including PETA and two other individuals, whose comments condemning archaic experiments on monkeys were blocked from appearing on at least one of the agency’s social media pages. Through a Freedom of Information Act request, we found out just how far NIH will go to suppress legitimate criticism. Among other numerous words and phrases associated with animal rights, NIH’s keyword filters block “animal(s),” “chimpanzee(s),” “monkey(s),” “cats,” “mouse,” “experiment,” “testing,” “PETA,” “torture,” and “revolting.” The HHS also blocks all comments containing “monkey” from appearing on its social media pages. The plaintiffs in the lawsuit include a former animal lab technician turned animal advocate and an engineer at a digital health company. In other words, NIH isn’t just suppressing criticism of its barbaric tests on animals—it’s potentially stifling discourse on medical research, science, and bioethics.

Earlier this year, PETA sued NIH for repeatedly failing to respond to our requests to release documents on taxpayer-funded experiments conducted in its laboratories—including Elisabeth Murray’s notorious “monkey fright” tests, in which she cuts into monkeys’ heads, saws off a portion of their skulls, and then injects toxins into their brains to inflict traumatic brain damage before frightening them with realistic-looking rubber spiders and snakes.

Government agencies should not be suppressing the public’s right to speak up about their practices. Instead of trying to hide from criticism, NIH should simply end these barbaric experiments. Join PETA in calling for the agency to shut down Murray’s laboratory: