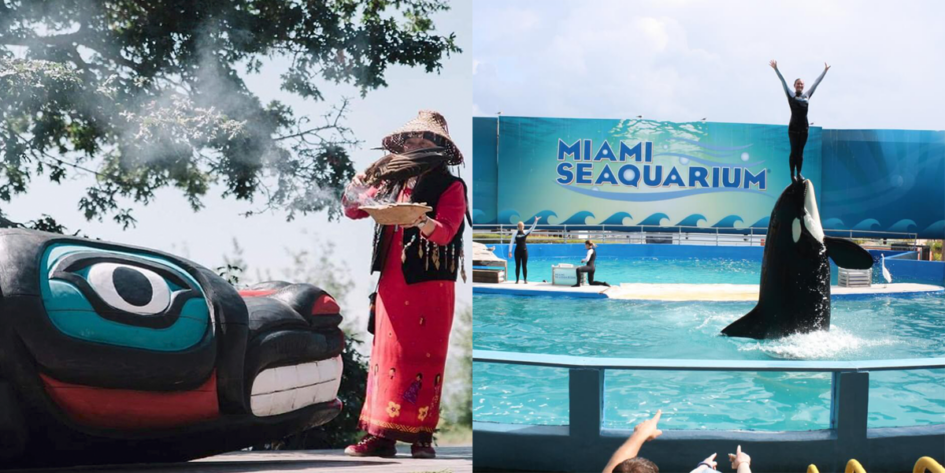 To the Lummi Nation, orcas are sacred. These self-titled “People of the Sea” draw no distinction between their orca relatives and human kin. They have missed an important member of their family for more than 50 years: Sk’aliCh’elh-tenaut. You may know her as Lolita. Captors abducted her from her ocean home and her mother, who is believed to be the still-living orca named Ocean Sun. Lolita currently lives in the smallest orca tank in the world at the Miami Seaquarium, which was recently cited for a slew of federal animal welfare violations, including feeding Lolita bad fish, reducing her food intake, and forcing her to perform certain tricks that likely injured her, all against the advice of the facility’s veterinarians.

In a historic approach to reunite with Lolita, the Lummi People are doubling down on their efforts and teaming up with lawyers to sway the tides. Two Lummi elders intend to sue the Seaquarium under the Native America Graves and Repatriation Act (NAGPRA), a federal law which is used to return “objects” of cultural importance to Native Americans. They would demand the Seaquarium return Sk’aliCh’elh-tenaut to her family—in the first time the law would be applied to a living being.

Elders Raynell Morris and Ellie Kinley are hoping that a lawsuit will not be necessary. They are optimistic the Seaquarium will work with them. The Lummi are making plans with The Whale Sanctuary Project for her long-awaited release to her original home in the waters with Ocean Sun.

“We know how Ocean Sun feels with her daughter still being enslaved,” Morris said. “We feel that healing can begin when Sk’aliCh’elh-tenaut is brought home and is free.”

The ongoing quest to rescue Lolita gets to the heart of the rights of Indigenous people. Her capture and imprisonment is an open wound for the Lummi People.

Sk’aliCh’elh-tenaut has been without the company of another orca nearly since she was abducted from her home in the sea over half a century ago. Her former tank mate Hugo died in 1980 after repeatedly ramming his head into a wall. The Lummi see Lolita as kin who was abducted from their territory, where they have lived together for thousands of years.

Feeling trapped and isolated during #quarantine?

Lolita has been trapped in this small tank for nearly 50 years. The last time she saw another orca was in 1980, when her tank mate, Hugo, died after banging his head against the wall. #FreeLolita pic.twitter.com/BhBoAjiaFj

Mounting public pressure to keep cetaceans out of marine parks was sparked in part by PETA’s efforts. Our action alerts, protests, and lawsuits filed under the federal Endangered Species Act and Animal Welfare Act have kept up the campaign to release Lolita.

Outside the office of Miami-Dade State Attorney Katherine Fernandez Rundle, PETA gathered to call for cruelty charges against Miami Seaquarium’s abusive treatment of the orca Lolita.

Keep the pressure on to retire Sk’aliCh’elh-tenaut to a seaside sanctuary, where she can feel waves, hear her pod’s calls, and finally have some semblance of a natural life. She deserves to be with her family.

Speak Up for Lolita today