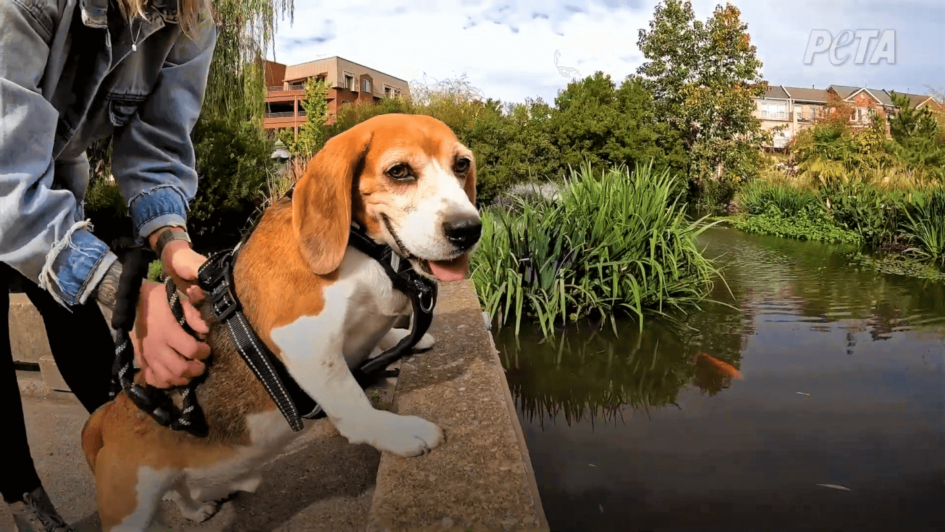 On the heels of the viral news that Anthony Fauci’s National Institutes of Health (NIH) division funded experiments on beagle puppies, PETA is releasing the results of an undercover investigation that found around 5,000 beagle dogs and puppies intensively confined to small, barren kennels and cages 24/7 at Envigo, a massive breeding mill in Cumberland, Virginia, that supplies dogs to NIH. Dogs like 8-year-old Samson know only concrete, steel, and the deafening din of the thousands of other beagles who were being bred to be shipped to laboratories around the world. But as the new video below reveals, PETA rescued Samson from the dog prison’s barren cages and other horrors. Take a look:

While stuck in a cage at Envigo, Samson was used as a breeding machine, reportedly resulting in hundreds of other puppies’ births at the factory-like mill. He shied away from human contact because it often meant that he would be left soaked to the skin when workers sprayed his cage down with a high-pressure hose.

But thanks to PETA’s investigator, he got away just in time to spend his first Thanksgiving in a home with people who show him kindness and respect.

Samson is one of thousands of beagles whose miserable, lonely existence is documented in PETA’s investigation into Envigo, where dogs don’t even have names—just six-letter tattoos on one ear. When he was released, Samson needed urgent care for an ear infection and over a dozen diseased teeth—but he still enjoyed his first plush bed, his first toys, and his first moments of peace and quiet. He is still traumatized and sometimes wakes up barking from vivid dreams, but he’s learning how to play with other dogs, sniff out new smells, observe squirrels and birds, and binge-watch TV shows on the sofa as a beloved member of a family.

PETA freed Samson from Envigo’s cages and experiments, and now he’s finally enjoying the good life. But thousands of other dogs are still being held captive inside that beagle hellhole, and they need your help.

Every one of the dogs at Envigo feels fear, pain, and loneliness, just like the dogs who share our homes. No animal should suffer for experiments or for any other reason. For these beagles and the countless other animals bred for experiments and imprisoned in government laboratories, we must urge President Joe Biden not to hire another “dinosaur” as director of NIH. Click below to urge your members of Congress to mandate that NIH stop throwing away our tax dollars on cruel and useless experiments on animals like these beagles and instead focus on modern, non-animal research methods:

We Rescued Samson—Join PETA in Taking Action for Others, Too

PETA Reward: Up to $5,000 Offered in Fatal Dog-Stabbing Case