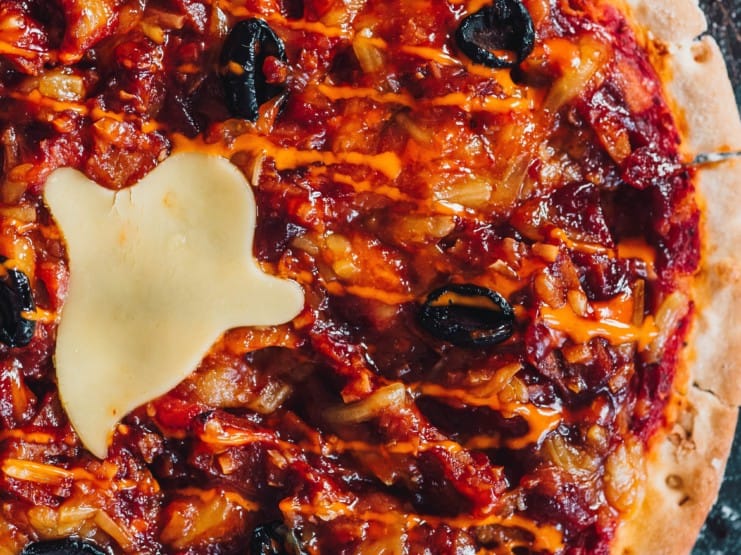 The launch follows a long line of collaborations from OPP with vegan brands such as with in UK retail; a collab with vegan fried chick*n pioneers VFC for the ; and last year’s partnership with plant-based brands , the legendary , and vegan burger bar for the limited-edition Meatless Farm Cheezeburger Pizza.

, co-founder of One Planet Pizza, says: “It’s been a plant-based dream come true to collaborate with Derek Sarno, whose innovative creations have proved that eating plants can be even more exciting and tasty than meat and dairy products. Our Wicked-Planet Pizza is the first pizza in retail to feature a cheeze shaped ghost and we know vegans, vegetarians and meat-eaters alike will be delighted with the epic flavours in every slice.”

, Co-Founder of Wicked Kitchen, says: “One Planet Pizza has been on my radar for a while now, always happy to work with great teams such as theirs. So when they approached me to help them craft a Wicked Pizza, for Halloween, the ideas flowed.  We have something really special and incorporated some of the mushroom innovation I’ve been working on. We landed on the BBQ pulled King Oyster paired with the creamy cheeze, salty olives, and kick of sriracha. It’s all treat and no tricks, and it’s wicked delicious!!”

The Wicked-Planet Pulled Mushroom Pizza is available to buy online from One Planet Pizza Direct priced at £3.99.