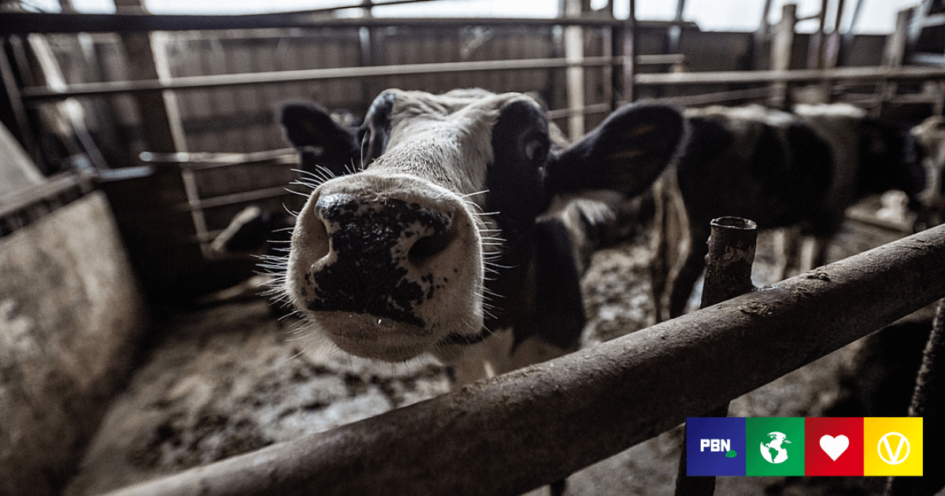 An organic dairy farm in British Columbia, Canada, is being urged to close down following reports of animal cruelty.

Cedar Valley Farms became the center of an investigation after covertly filmed footage of the facility was sent to the BC SPCA – the British Columbia Society for the Prevention of Cruelty to Animals.

The videos, taken from May this year until a few weeks ago, captured workers kicking cows in the face and violently beating them with wrenches and pitchforks.

Cows were sprayed in the face with high-pressure hoses, dragged by heavy machinery, and were filmed limping and collapsing.

In other clips, newborn calves are pulled away from their mothers and thrown into wheelbarrows. Mother cows could be seen bellowing and chasing after their babies. On at least one occasion, a worker kicked a cow in the face to prevent her from reaching her calf.

Other footage showed workers illegally shooting the animals in the head, leaving them to die slowly for several minutes.

It’s a far cry from Cedar Valley’s animal welfare claims, and has resulted in its license being suspended.

Marcie Moriarty is the BC SPCA’s chief prevention and enforcement officer. She says the footage indicates that Cedar Valley has violated the Prevention of Cruelty to Animals Act and the Criminal Code of Canada.

“… We received video footage that appears to be depicting very serious instances of animal abuse on this farm,” Moriarty commented. “We immediately attended the farm on an unannounced visit and are reviewing more than 300 video clips as we prepare our case to present to Crown counsel.

“This is a high-priority investigation and we are building a very strong case to present to Crown counsel with a recommendation for charges.”

Craig Daniell, BC SPCA chief executive officer, took a thinly veiled swipe at the government’s inaction on the matter, naming it “absolutely unacceptable.”

“The BC SPCA is extremely concerned about the lack of accountability on commercial farms and has reached out repeatedly to the provincial government and industry for more than a year about the need for a third-party auditing system on farms to ensure that proper animal welfare practices are being upheld,” Daniell said.

“This would include video monitoring on farms with a third-party system of reviewing footage. Despite repeated calls for action, there has been none and animals are continuing to suffer.”

BC SPCA leads nearly 9,000 investigations into animal cruelty and neglect across the province every year. But if the government and industry remain immobile, the abuse will continue, Daniells said.

People for the Ethical Treatment of Animals (PETA) is campaigning for the closure of the facility.

In it, PETA pressed the ministers to shut down the farm for good.

“Workers showed little regard for the animals, many of whom were emaciated and had mobility issues … The gentle giants, who can feel pain and suffer just as dogs, cats, and other animals, were traumatized,” the letter reads.

The industry as a whole “treats cows as mere milk machines instead of the complex, feeling beings they are,” it adds.