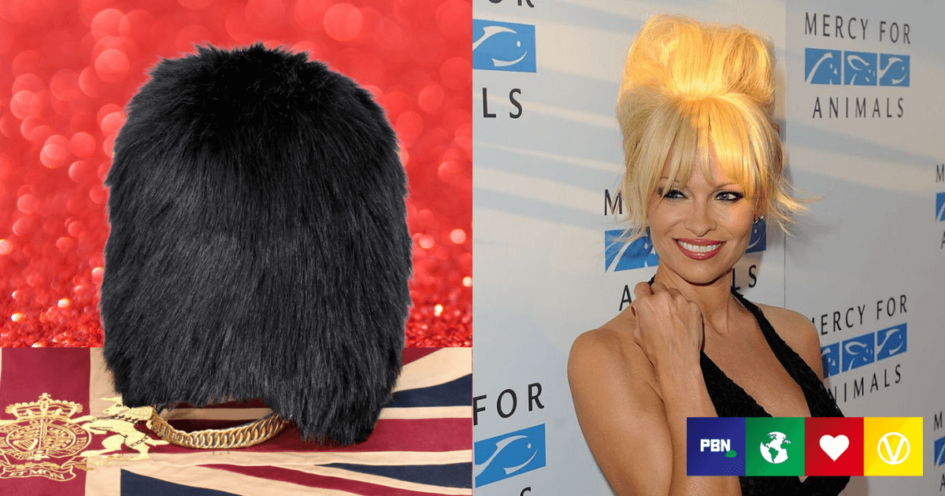 Vegan actor Pamela Anderson has penned a letter to UK Prime Minister Boris Johnson, urging him to help replace the bearskin caps worn by the Queen’s Guard with cruelty-free alternatives.

The Ministry of Defence (MoD) has forked out more than £1 million of taxpayer money in the past seven years to purchase 891 bearskin caps. According to People for the Ethical Treatment of Animals (PETA), up to 1,000 bears may have been killed to produce the hats.

The Queen’s Guards have worn these ornamental hats for more than 200 years. According to LBC, the caps were designed to make troops appear taller and more intimidating during battle.

Now, many consider the headwear to be superfluous and cruel. To Anderson, the use of them is “outrageous.”

“As you probably know, it takes the fur of at least one bear – who was likely baited and gunned down – to make just one of these ornamental caps. Some of these bears are nursing mothers whose cubs will slowly die without them there to protect and care for them,” Anderson wrote in her letter to Johnson.

“Mr Johnson, there is nothing more important for people in positions of power to do than protect the vulnerable. Please instruct the Ministry of Defence to make the switch to cruelty-free faux fur,” she added.

The 54-year-old activist then urged Johnson to accept a recent offer by ECOPEL, which just launched the “world’s first” faux bear hat.

ECOPEL built custom machinery to create the animal-free fabric, which is the same length as real bear fur. It’s also more eco-friendly, PETA says, and can easily be made entirely waterproof.

ECOPEL has offered to give the vegan bear fur to the MoD, for free, until the end of the decade.

“It would be unconscionable not to take it and to continue to allow innocent animals to be killed when a humane alternative exists,” Anderson said about the offer.

In 2015, when Johnson was Mayor of London, the politician said synthetic fur caps could be considered if that would “help save a few bears.”

Johnson has not yet publicly responded to the letter.