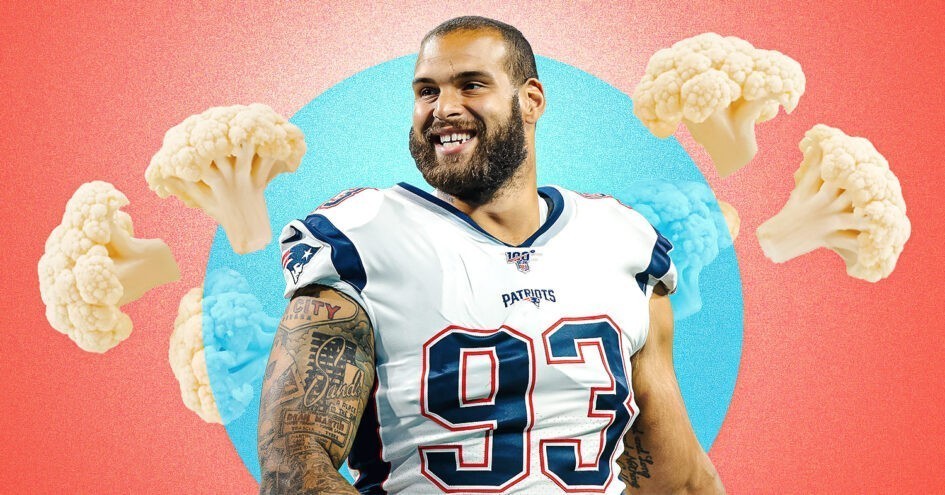 At 6’4’’ and 315 pounds, Lawrence Guy isn’t missing any meals. The Patriots lineman can hold his own on the field. And he’s doing it all on a vegan diet.

But his plant-based lifestyle isn’t anything new. The defensive tackle began nixing meat from his diet nearly a decade ago, starting with eating more plant-based food during off-seasons. He says he made the switch in order to eat healthier, gain more energy, and aid in his recovery.

​​”You get beat up on this field every day. Your body needs nutrition more than ever to recover,” Guy told ESPN. “What’s the best way to do that? I think it’s plant-based. All you’re doing is prolonging your career in a certain way.”

“Every offseason I wanted to truly help my body fully recover,” he explained to GQ. “My wife and I started taking out heavy red meat products and my body felt better, my joints felt better. I never really drank milk.”

Then, he cut out chicken and fish, and started seeing positive changes in his body. “You’re not as bloated. You’re running and your knees don’t hurt as much. You stop waking up in the morning feeling groggy,” he said. “You feel energized. When you take all the heartier stuff out and put the plant-based in, you don’t have to overwork to digest everything.”

Kicking off his tenth season in the NFL, Lawrence Guy is all about his vegan diet—eating meat only on occasion. (He’s certainly not the only athlete to ditch meat and dairy…) So, what does the plant-powered athlete eat? Apparently, lots of cauliflower.

“Last year everything was about cauliflower,” he said. He says his wife, Andrea—who helped him go plant-based—is a pro in the kitchen. “She’d make cauliflower rice, she had cauliflower pizza, lasagna, those cauliflower hash browns.”

Hungry yet? Here’s what Guy eats in a day:

In addition to cauliflower hash browns, Guy likes to indulge in the ultimate breakfast of champs: pancakes or oatmeal rice. Post-workout, he’ll enjoy something fruity like an açaí bowl or a green smoothie (he’s not a fan of protein shakes) featuring kale, carrots, and ​​flax seeds. “We have a bunch of apples. Apples give you so much energy,” he said.

It’s likely potatoes will be front and center in Guy’s midday meal. He says eating sweet potatoes helps him to gain and maintain weight. (Want to eat like Guy? Try whipping up this sweet potato, kale, and farro salad.) His go-to meal before practice is an almond butter and jelly sandwich. Or, he’ll munch on vegan tacos.

What’s for supper? The aforementioned cauliflower pizza, to start. His wife’s recipe features a cauliflower crust topped with hummus and grilled veggies. Or, they’ll dine on a bowl of spaghetti squash or zucchini noodles.Guy us also a big fan of Beyond Meat, so it’s highly likely that he’ll nosh on a juicy vegan cheeseburger at some point during the week. And what’s a meal without a little dessert? Don’t be surprised if you see Guy enjoying a slice or two of peach cobbler.