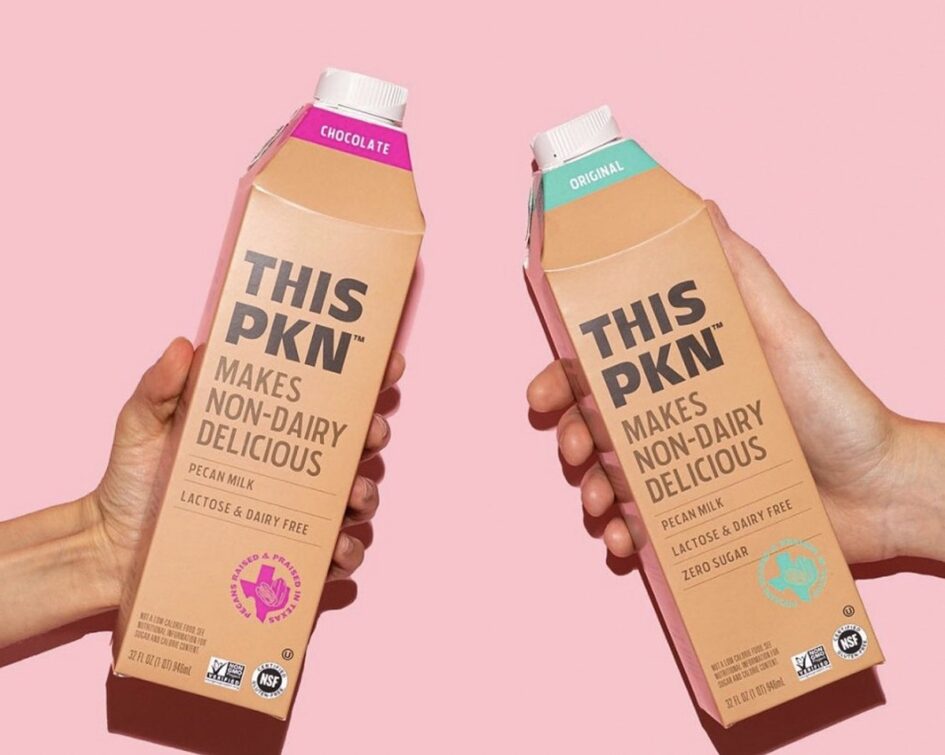 A new plant-based milk brand called THIS PKN just debuted this month to take on the ever-expanding alternative milk market. THIS PKN’s product differs from most nut-based milk companies because its product is designed to taste just like its base: Nuts, unlike other alternative milks which try to replicate the taste of cow’s milk. The alternative milk product is designed to perfectly substitute conventional milk while maintaining a taste similar to pralines and pecan pies. The plant-based milk brand is the newest product from Lifestock – a sustainable company launched by Laura Shenkar to support Texas pecan farmers.

Laura Shenkar founded Lifestock as a campaign to preserve limited freshwater ecosystems in Central Texas, looking at how pecan production could motivate farmers to conserve water. THIS PKN is a byproduct of this partnership, a product that could help to broaden the consumer base and market for pecan production. Most farmers felt constricted by pecan production, typically unable to sell enough pecans to justify increased production. Shenkar’s company hopes to maximize pecan demand to increase pecan production throughout the region.

Shenkar felt inspired to work with pecan farmers after visiting the “World Capital of Pecans” in San Saba, Texas. When working with the local pecan farmers, she learned that pecans significantly help local ecosystems while promoting regenerative agriculture and water sustainability. Shenkar realized that pecan production could both help sustainable farming in central Texas and meet the rising demand for alternative milk.

“We chose to make pecan milk because pecans are the only commercial tree nut indigenous to the US,” Shenkar said in a statement. “Consumers who are looking for a locally sourced, richly flavored, sustainable, and nutritious choice will find it with THIS PKN. We can’t wait to welcome pecan fans and non-dairy consumers alike to join Team PKN.”

Currently, THIS PKN offers two varieties of pecan-based milk with its original and chocolate flavors. The plant-based alternative is available on the company’s website.

The dairy alternative market is experiencing an unprecedented rise as more consumers looking for plant-based alternatives in recent years. A report from Grand View Research projects that the alternative dairy market is slated to reach $52.58 billion by 2028, showing a CAGR of 12.5 percent from 2021 to 2028. While the majority of alternative dairy products are derived from almond, soy, oat, and coconut, several other variations including THIS PKN’s pecan-milk have entered the market.

Another plant-based dairy company sources its products from an even more unlikely candidate: potatoes. The Swedish Brand DUG released its potato-based milk earlier this year, boasting an enhanced nutritional content complete with B12 vitamins. DUG’s innovative product is marketed to espresso lovers, claiming that its potato and pea protein product foams similar to animal-based milk.