Pectin: 14 Things You Should Know 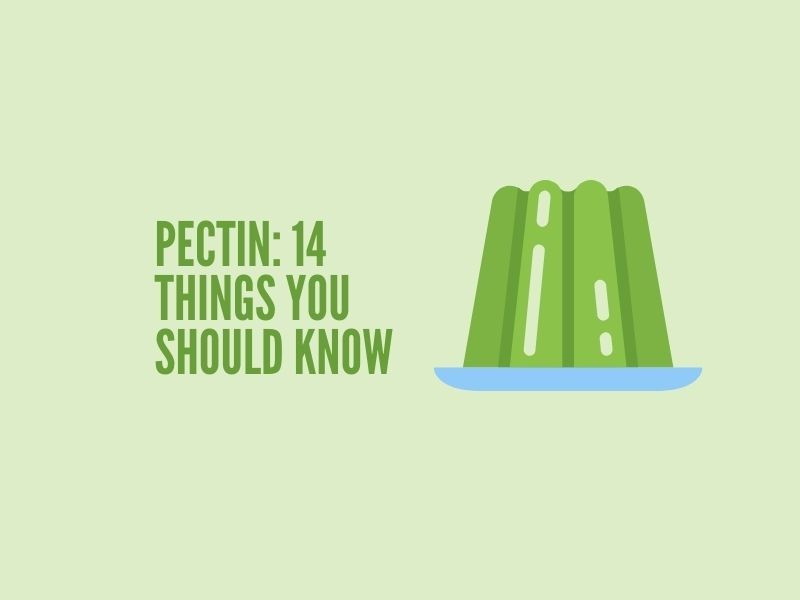 Pectin has been used in medicine to treat high cholesterol, high triglycerides, and to prevent colon cancer and prostate cancer.

More recently, we see it being used as a thickening agent in baking and cooking, as well as an ingredient in denture adhesives.

Here are 14 things we believe you should know about pectin.

Pectin is a natural and commercial ingredient that plays a variety of roles, but it’s been quite preponderant in preserves, like jellies and jams, which are unable to gel without a thickening agent such as pectin. Pectin naturally occurs in the walls of fruits and vegetables, providing them with structure.

Food manufacturers often combine pectin with acid and sugar to make jellies and jams develop a semisolid structure as they cool down.

Commercial pectin is typically made from citrus rinds, and it’s sold as a dry powder as well as a liquid, and it is quite an expensive product.

There are two main types of pectin: high methoxyl (HM) and low methoxyl (LM) – the first one being the most common type of pectin, which is often used to make chunky jams and marmalades, and the last one is one that uses calcium instead of sugar and is often used in low-sugar recipes.

Different types of pectin behave differently, so you ought to use the variety listed in the recipe you’re planning to replicate, although I’m not sure recipes specify exactly the type of pectin you should be using.

Is Pectin Bad For You?

There’s nothing that remotely suggests that pectin is dangerous to human health, otherwise it wouldn’t be commonly used in jams or other high-sugar foods.

However, it is bad to consume a lot of food products containing pectin, because those usually contain more sugar than what is deemed healthy.

According to Rxlist.com, “In most people, including adults, children, and women who are pregnant or breast-feeding, pectin is LIKELY SAFE when taken in food amounts and POSSIBLY SAFE when used in larger medicinal amounts.”

They also point out, “When taken by mouth in combination with guar gum and insoluble fiber (the combination used to lower cholesterol and other blood fats), pectin can cause diarrhea, gas, and loose stools.”

This, however, doesn’t suggest that pectin in food is problematic, particularly because it’s used in small amounts.

Yes, pectin is suitable for vegans. It is extracted from the cell walls of plants, particularly fruits with a high pectin content, such as apples or quinces.

In fact, commercially available pectin is mostly produced from apple pulp and citrus fruit skins, which you can buy in powdered or liquid form.

Alternatively, if you find commercial pectin expensive, you can make it by using tart apples, a few tablespoons of lemon juice, and a few cups of water.

Are Pectin and Gelatin The Same Thing?

Pectin and gelatin typically play the same role as thickening and gelling agents, however, they come from completely different sources.

While pectin is derived from plant-based sources such as fruits and vegetables, gelatin is obtained by boiling skin, tendons, ligaments, and/or bones with water, which are usually derived from cows and pigs.

They have similar applications at a basic level – both can be used to create a gel-like texture, but the recipes in which they can be used vary in range. Pectin has a more specific recipe use, while gelatin can be used in a wider range of recipes.

Pectin does not seem to be keto-friendly as it contains a moderate carbohydrate content, for instance, each serving of this fruit pectin powder, contains 15g of carbohydrates, of which 14g are added sugars.

Another example is this fruit pectin powder by Hoosier Hill, which contains a total of 8g of carbohydrates per serving, of which 7g of sugar are added sugars.

Therefore, based on these samples, I don’t think that pectin is a keto-friendly option.

As an ingredient that is derived from plants, pectin is generally recognized as halal.

It does not contain (or include) ingredients such as pork, alcohol, crushed bugs, or certain other ingredients that may not be in alignment with Islamic law.

However, the same cannot be said about gelatin (which serves the same role as pectin) because it is derived from boiled bones, generally derived from cattle or pork.

Where Is Pectin In Grocery Stores?

There is a good chance that you may be able to find Pectin in the baking aisle, particularly because it’s often used for that purpose – and it’s an ingredient that’s becoming more mainstream, but not in all places.

Therefore, if you don’t find it in the baking aisle, we’d recommend checking the natural food aisle, where other products like seitan, tempeh, and other alternative products can be found.

Pectin may also be sold in the supplement aisle, as it’s often sold as a dietary aid.

You should be able to find Pectin in most large retailers and supermarket chains, but it might be trickier if you’re intending to visit smaller grocery stores.

Yes, pectin does go bad, but not in a way that is toxic to your health.

If pectin goes past its expiration date, it loses its gelling capacity, which means that if you use pectin to make jams or jellies, you’ll notice that the end product might not be able to maintain its firmness.

Does Pectin Have Gluten?

Yes, pectin is certainly gluten-free. Gluten is typically found in grains such as wheat, barley, or rye, but pectin is actually extracted from fruits such as apples, quinces, guavas, pears, gooseberries, and oranges.

Therefore, no, pectin does not contain gluten and is suitable for people with gluten intolerance or celiac disease.

However, pectin may be included in products that contain multiple ingredients, including ones that contain gluten, so you should always make sure you pay attention to labels.

Does Pectin Have Sugar?

One of the compounds present in pectin is galacturonic acid, a sugar acid derived from galactose, therefore yes, pectin does contain sugar.

Additionally, if you look at the labels of different dry pectin powders, you’ll notice that they contain carbohydrates, mostly in the form of added sugar.

Apples, in general, are a great source of pectin, however, the apples with the highest pectin content are green apples, which are technically underripe.

Granny Smith, a type of green apple, contains the most pectin, so it’s the one food manufacturers use the most to produce pectin.

Does Rhubarb Have Pectin?

While Rhubarb does not contain the same amount of pectin as apples, quinces, or pears, it does contain pectin.

However, it doesn’t contain pectin enough to make it a good option to use in recipes like jams, marmalades, or jellies.

Does Lemon Juice Have Pectin?

While it’s true that lemons do contain pectin, it is mostly concentrated in the peel, although the pulp (or juice) also contains pectin, but not in a significant amount.

Does Pineapple Have Pectin?

Pineapple does contain a small amount of pectin, but not enough to be a good source of pectin and be used in byproducts such as jams, jellies, or marmalades.

Pectin is becoming more mainstream, particularly due to the rise of the vegan movement, as people look for alternatives to gelatin (an animal ingredient) in recipes.

However, there are still many people who are not familiar with pectin, therefore we felt compelled to create a short article that would touch on some of the questions people might wonder about.

If you’re vegan or vegetarian and wish to replace gelatin in a recipe, be sure to consider pectin as it might just be the ideal replacement for the delicious dessert you wish to make.

Our Recommendation For Vegans

Future Kind’s Essential Vitamins: This is our favorite multivitamin. It’s not the typical multivitamin because it was formulated to specifically address potential shortcomings in the vegan diet. It contains the essential vitamin B12, vitamin D, and Omega-3 fatty acids (DHA & EPA) delivered in necessary doses so you don’t have to worry about potential deficiencies. Want to learn more about it? Check out the review we did on it.

Where to Buy Pectin (Plus, Finding It In Grocery Stores)