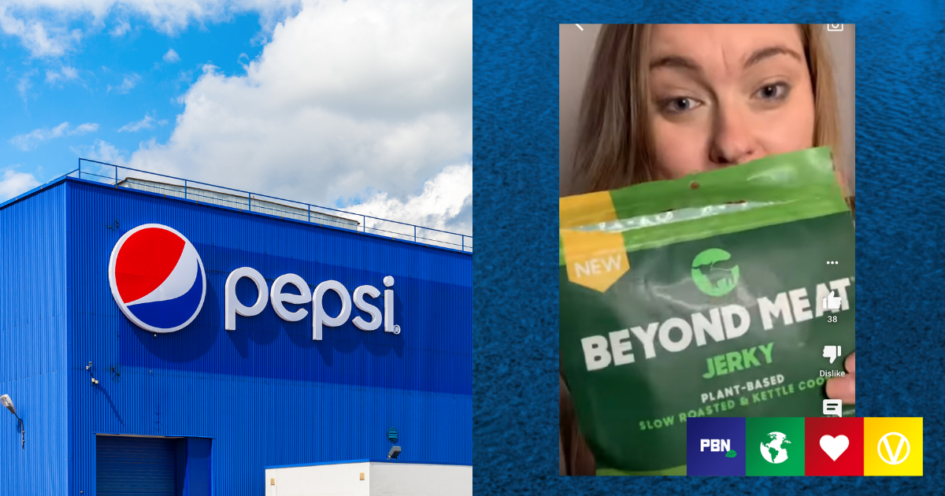 Both beholden as global brand giants, PepsiCo and Beyond Meat dominate their respective markets. And now in surprising news, the companies have announced they are working together on new plant-based protein and beverage products.

The pair will unify on the joint venture, with the first product in-store dubbed to be a vegan jerky snack – after a blogger leaked the news online.

It’s named The PLANeT Partnership and will utilize Beyond Meat’s technology combined with PepsiCo’s marketing capabilities, the firms said in a statement.

News organization Bloomberg reported that the jerky would be its initial offering after YouTuber Amber Criste leaked the news in a video.

She told her more than 100,000 subscribers: “It is good. It’s one of those things where maybe it tastes a little too real…it’s nice and kind of spicy and really chewy.”

Visible on the packet shown in the video, the jerky is slow-roasted and kettle-cooked, as well as being GMO and soy-free.

In a second view, she said she had been sent free samples of the jerky. But, hadn’t realized that the launch could be a “secret” after being approached by journalists.

Here, she outlined how different the product was in comparison to other vegan competitors. “They [Beyond Meat] nailed that texture and that’s important,” she said.

According to CNBC, the jerky could be released early this year.

Ethan Brown, Beyond Meat’s founder, said the company is “thrilled” to join forces with PepsiCo.

“We look forward to together unlocking new categories and product lines that will inspire positive choices for both people and planet,” he added.

Traditionally, jerky is made from turkey or beef and can be traced back to indigenous cultures in North and South America, where it was dried in order to preserve the meat for longer.

Back in 2018, the vegan jerky industry secured $2.5 billion, according to the Good Food Institute. And, between now and then, a host of new brands have edged into the market to take their slice.

The following year, that grew to a further $3.9 million with anticipation to hike even higher.

PepsiCo and Beyond Meat Team Up On Vegan Jerky

Noble Jerky Review: Is It The Best Vegan Jerky?

No, Taco Bell Did Not Cancel Beyond Meat Test. Is New Vegan Meat on the Way?

After Three Decades at Tyson, Two Meat Execs Jump Ship to Work for Beyond Meat

Made In Chelsea’s Verity Bowditch To Expand Vegan Restaurant Amid £1.4M Investment