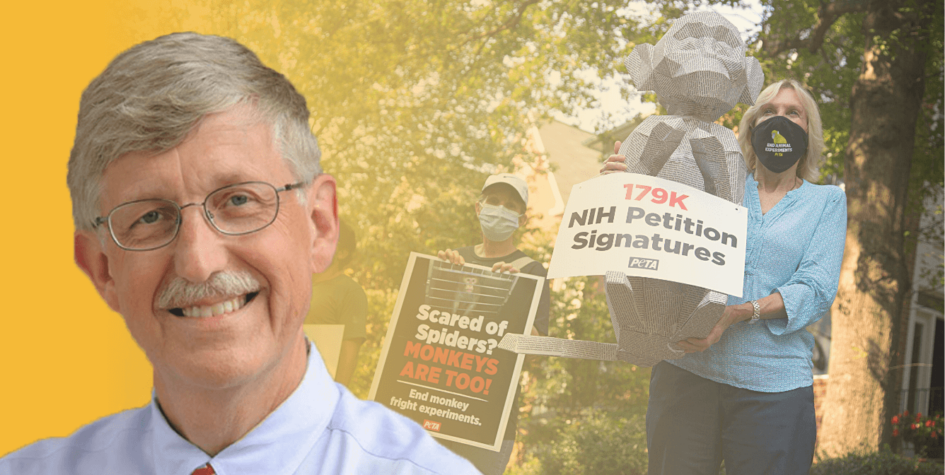 PETA has been saying it for months, and now one of the nation’s leading newspapers has reported startling new information that confirms our assertion that Francis Collins, director of the National Institutes of Health (NIH), must be removed from his post immediately. The Washington Post has revealed that Collins and one of his top lieutenants, Anthony Fauci, have approved and funded pathogen-engineering experiments—so-called “gain-of-function research”—that can make deadly viruses even more contagious or virulent. And they’ve been doing this with none of the usual transparency and with a weakened scientific review committee.

This appears to be about Collins’ consolidation of authority and power. The scientific review committee, reports the Post, has been reduced to an advisory board whose power to veto has been removed. In one experiment that NIH funded, a bird flu virus was essentially weaponized. This already-deadly airborne virus had not been easily transmitted, but the genetic tinkering made it transmissible among mammals. Scientists who reviewed the work say that if it were released, it could kill 4 billion people in short order.

The experimenters then wanted to publish the study, which includes a sort of “how to” on engineering the virus. Some scientists feared that the study’s publication could show nefarious actors how to create a virus that can be used in biowarfare. They objected. But, reports the Post, Collins and Fauci—behind the scenes—lobbied for its publication, effectively anointing themselves arbiters of what is safe, effective, and important. The study was published.

Mind you, this fiddling with deadly viruses is taking place under NIH’s authority—the same agency where, in 2014, workers found 12 long-abandoned cardboard boxes that contained 300 vials of infectious agents, just absent-mindedly strewn across the room. Some of these vials contained the virus that causes smallpox. The vials had been used decades—decades!—before and were supposed to have been destroyed.

This is also the same NIH where rampant negligence, cruelty, and repeated violations of federal law occur almost daily. As we’ve pointed out before, 75 cases of serious animal welfare violations were documented in NIH’s Maryland laboratories between January 2018 and June 2021. Animals suffocated, starved, and died of dehydration. They were injected with the wrong drugs and subjected to unapproved procedures. They became trapped in parts of equipment and died while frantically struggling to escape. One mouse burst into flames—yes, you read that right—when experimenters failed to notice that alcohol fumes had built up during a heat-generating surgery.

But this is the agency that the public trusts to fund research on viruses capable of wiping out half the planet, and we’re going to leave Collins in charge? The answer should be a firm no.

We already knew that Collins too often puts science in the backseat. He is well aware that experiments on animals are failing to lead to treatments for humans. But he is apparently more concerned with preserving his reputation among animal experimenters while he throws half the agency’s bloated budget of $41 billion out the window on cruel and senseless animal experiments, despite overwhelming scientific evidence that animal studies overwhelmingly fail to lead to effective treatments and cures for human diseases. But the Post’s report adds a sinister new layer to Collins’ reign.

PETA has already shown that Collins can’t keep his own house in order. What we’ve just learned is that the director of our nation’s foremost research authority is not a leader—he’s a comic book villain.