PETA’s Pitch to Liberate the Lingo of Baseball: Scratch ‘Bullpen’ for ‘Arm Barn’ 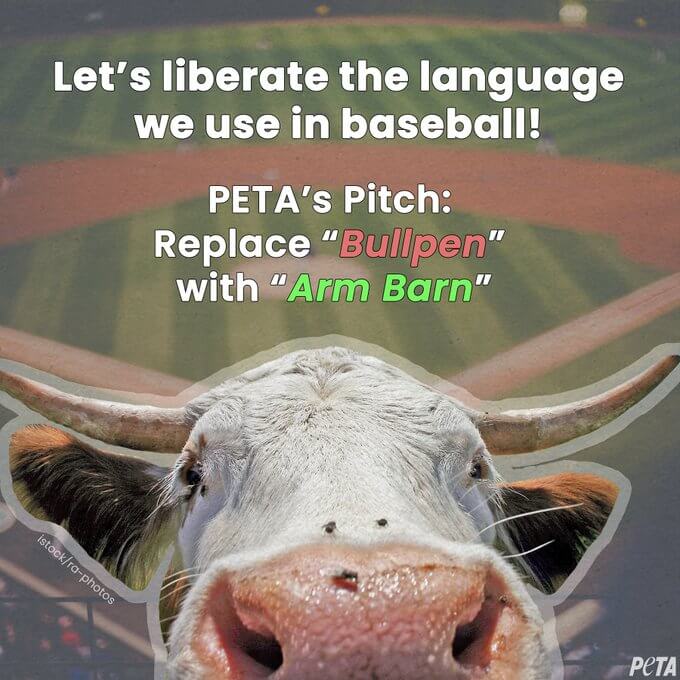 As the World Series turns into a pitching duel, PETA is pitching a proposal to the baseball world: Strike out the word “bullpen”—which refers to the holding area where terrified bulls are kept before slaughter—in favor of a more modern, animal-friendly term. PETA’s suggestion? The arm barn!

listen. ARM BARN IS A GIFT. doesn’t matter where it came from.

Strike Speciesism From Your Life: Why Words Matter

In the meat industry, cows are hung upside down and their throats are slit, while in rodeos, gentle bulls are goaded into kicking and bucking by being electroshocked. While they await their violent fate, these sensitive, frightened animals are typically held in a “bullpen.”

It has perhaps never been more evident that words carry immense power—even within the baseball diamond. People are striving to eradicate racist, sexist, homophobic, and ableist phrases (or team names) from our common language. But unfortunately, many of us also grew up hearing phrases that condone violence toward animals and perpetuate speciesism, a human-supremacist worldview. Sayings such as “kill two birds with one stone,” “beat a dead horse,” “bring home the bacon,” and “bullpen” all normalize violent acts against some of the most defenseless members of our society.

Share this post with your friends, family members, and social media followers—let them know why you think the MLB should take up PETA’s pitch and embrace the term “arm barn.”