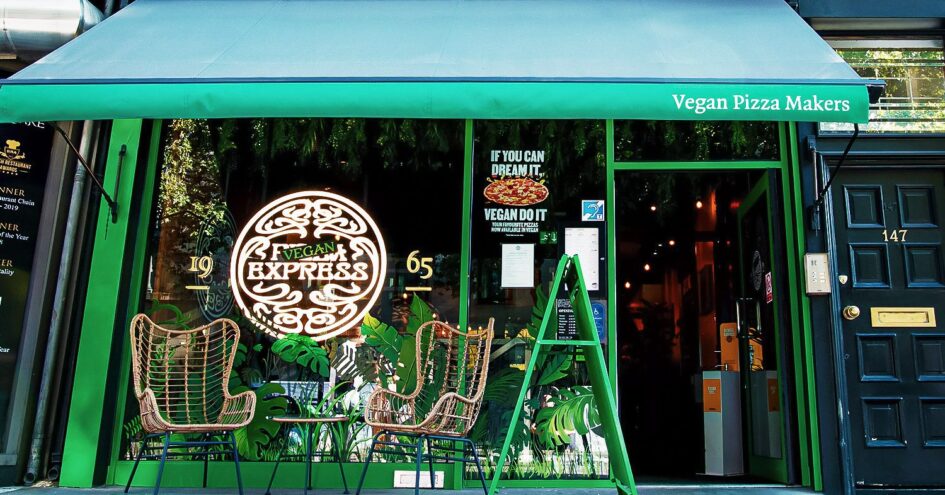 One of the UK’s most popular Italian restaurant chains has opened a 100 percent plant-based location: Vegan PizzaExpress is now welcoming customers in London.

Based in Aldwych on The Strand, the location is a celebration of PizzaExpress’ new vegan menu, which includes 5 meat- and dairy-free versions of the chain’s most popular pizzas, including the Vegan American Hot, the Vegan Ad Astra, and the Vegan Forza. (The former features jackfruit pepperoni slices, while the latter two options are topped with Quorn pieces.)

“Our new vegan menu is so wide-ranging and delicious that it deserves a pizzeria of its own – so that’s exactly what we did,” said PizzaExpress’ chief customer officer Shadi Halliwell. “Vegan PizzaExpress is our first restaurant that will serve our vegan menu exclusively and is a true showcase of these authentic flavors that we’ve been perfecting since 1965.”

Since the launch of its Vegan Giardiniera in 2017, PizzaExpress has steadily grown its plant-based menu, cementing its reputation as an inclusive and vegan-friendly family dining destination.

The new vegan versions of its most popular menu items and the new vegan restaurant follow the success of PizzaExpress’ Sloppy Vegan pizza, which launched earlier this year. It offers a meat-free take on its Sloppy Giuseppe.

PizzaExpress food and beverage director Jane Treasure confirmed that the new vegan pizzas stay true to the “unique flavors” of the original versions, before adding that the company worked “tirelessly” with tasting panels to perfect the recipes.

Restaurant chains and food-food joints across the UK are consistently launching new vegan options to cater to an increasingly flexitarian demographic of consumers. (According to a YouGov poll from May 2021, 13 percent of Brits are actively trying to reduce their meat consumption.)

In the last few months, McDonald’s has announced the trial of a vegan McPlant burger; Starbucks has added a vegan meatball wrap to its Autumn menu; Costa launched a vegan bacon roll, and Greggs launched multiple new meatless options, including a vegan breakfast sausage bap and a vegan sausage, bean, and cheese melt.

The new Vegan PizzaExpress location is open now. “We can’t wait to welcome everyone from across London and beyond as they come to enjoy our wonderful new vegan menu,” said Halliwell.

Yoga-urt Is Opening a Third Location in Santa Monica