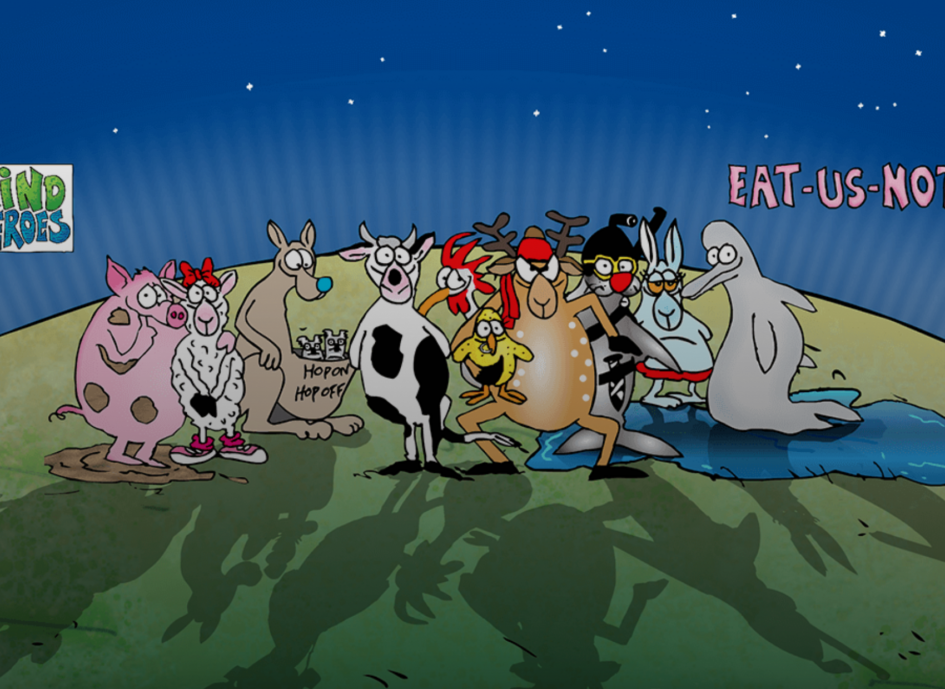 One of the world’s largest plant-based companies LIVEKINDLY Collective has teamed up with Toon van Driel, a famous Dutch cartoonist, to raise awareness of animal welfare.

The result of the collaboration is a humorous but powerful series of short, animated online film series, called “Kind Heroes.”

The cartoon series follows a group of ten animals, the Kind Heroes, through their adventures living on the land and in the sea, as they escape their imminent fate of being slaughtered for food. The Kind Heroes are passionate and lovable animals make plant-based living the new norm. One of the characters is Ernie, a pig from New York drawing up clever but desperate ways to avoid turning into pork. Another character, Rock Chick, is an adventurous baby chicken wanting to escape its cage and dreaming of becoming a rock star. The cartoons are chronicling the Kind Heroes’ quests to use their magic powers and save themselves and their animal friends from being eaten.

“I’m making my own fairytale book. I hope these tales will help people find empathy for animals, whether they are in the ocean or on the land. I no longer want them to be eaten – I quit doing that myself and now I want more people to join this movement,” said Toon van Driel. “The cartoons are limericks, so everyone can join and create their own. It’s a world of underdogs, underchickens and underlambs with just one wish: EAT ME NOT.”

“We believe that the responsibility to create and influence change will ultimately be driven by individuals and the younger generations and fueled by companies like ours, making conscious food choices widely available,” said Kees Kruythoff, Founder and CEO of LIVEKINDLY Collective. “We believe that plant-based living is the new norm, and we believe that if we fast forward to 2040, people will ask themselves, ‘Why did we ever eat animals?’”

“Our hope is to open people’s eyes to the consequences of what they eat. How come the animals visited at petting zoos continue to end up on their family tables?” said Mick van Ettinger, CMO of LIVEKINDLY Collective and one of the creators of the “Kind Heroes” series.

“With these cute but darkly realistic cartoons, we want to invite people to join our collective and change the world for the better. Meanwhile, we will continue to provide consumers with healthy, sustainable, and delicious sources of protein and raise awareness of the benefits of plant-based alternatives.”