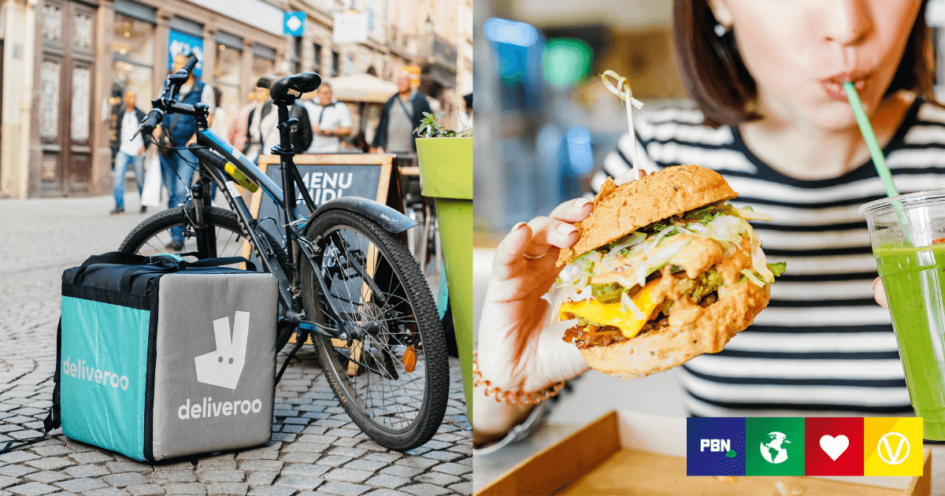 Deliveroo has revealed that one in five Brits will enjoy vegetarian and vegan food this Christmas as the award-winning delivery service has seen plant-based orders more than double over the past year.

Deliveroo now operates in nearly 800 towns and cities worldwide. The service allows customers to access over 140,000 restaurants and takeaways with orders delivered by over 11,000 riders.

Plant-based dining is now one of the fastest-growing categories on the Deliveroo platform. Over 14,000 vegan and vegan-friendly restaurants are available to order from its app.

The food delivery company has reported a 105 percent surge in orders of entirely plant-based dishes since World Vegan Month in November 2020. Brighton, Bristol, and Leeds order the most vegan food as a proportion of their total orders.

Devis also revealed that ‘vegan’ is now one of the most popular search terms on the Deliveroo app.

Fifteen percent of orders in its top-selling categories, burgers and pizza, contained vegan items over the past year. Also, a third of Deliveroo consumers report they are following a vegetarian, pescatarian, flexitarian, or vegan diet.

Meat off the menu at Christmas

As the plant-based food market booms, this festive season will see more Brits than ever breaking away from traditional meat-based meals. A recent survey revealed 19.6 percent of Brits will be enjoying a vegan or vegetarian dinner at Christmas.

The majority (58 percent) of survey respondents started eating plant-based at Christmas in the past four years or less. Slightly more females (21 percent) eat vegan or vegetarian food at Christmas than males (17.8 percent).

Deliveroo is committed to sharing the best plant-based food options throughout the festive season, it says. To support this, it has partnered with animal rights organization PETA.

“PETA has teamed up with Deliveroo to showcase the impressive array of vegan meals available on the app this World Vegan Month,” said Dr Carys Bennen, Senior Corporate Liaison at PETA.

The six finalists for this year’s Best Vegan category award are Neat Burger, What The Pitta, Oowee Vegan, Four Side, Frost Burgers, and Mildreds. Customers can tune in to Deliveroo’s Instagram on November 15 to discover this year’s winner.