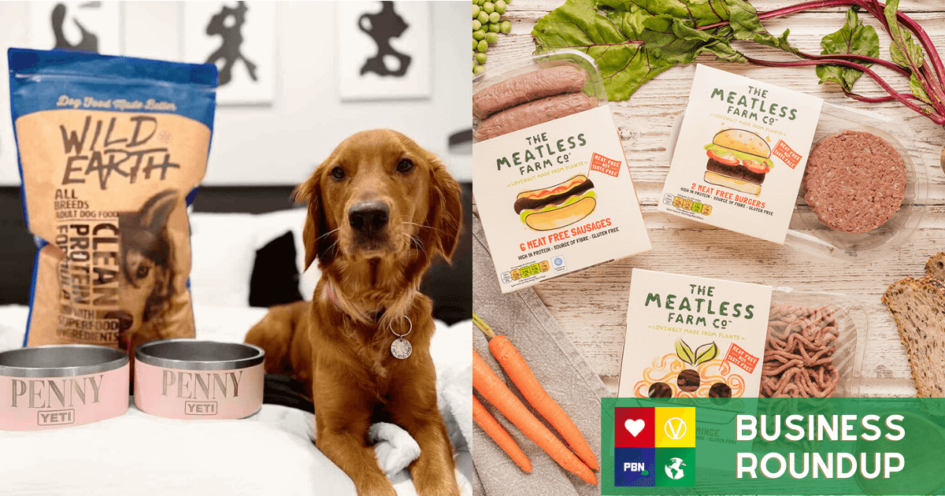 From Singapore to Germany to Canada, vegan business ventures are ramping up around the world. Here’s the latest on the plant-based business scene.

Wild Earth will use the funds to develop new products, including its first cell-based pet food. Cultured beef, chicken, and seafood are on the table for the company.

Ryan Bethencourt, CEO of Wild Earth, spoke to CNBC about the company’s mission.

“Of the meat we consume in the US, 25 percent to 30 percent of it goes to our pets,” he explained. “There’s this outdated perspective that the intestines and whatever else goes to our pets; that doesn’t happen anymore.”

‘Entire factory farms are running to feed our pets, and it just makes no sense to make little brown balls of protein if we can make it with plants,’ Bethencourt added.

And more people are getting onboard with the concept. Wild Earth experienced a 700 percent growth from 2020 to 2021, Bethencourt revealed.

The Very Good Food Company, which produces plant-based meat and cheese, is set to expand its retail presence in the US by 75 percent.

The company’s products will be available at 825 locations across North America, spanning across 15 states.

This is thanks to, in part, a collaboration with Earth Fare, one of the largest organic food retailers in the US.

Products from Very Good’s brand The Very Good Butchers will join store shelves at all 23 of Earth Fare’s locations, including in Georgia, Ohio, North Carolina, and Tennessee.

“Demand for our premium plant-based products is growing and the partnership with Earth Fare is the first time our products will be on retailers’ shelves in the Southeastern US,” Mitchell Scott, Co-Founder and CEO of The Very Good Food Company, said in a statement.

He continued: “Increasing our presence in US retail stores is a top priority for VERY GOOD as it is an area where we see potential for strong growth. We anticipate securing additional distribution points in US stores by the end of the year and into 2022.”

Feel Foods entered a share exchange agreement with the brand and its shareholders. It has now acquired all of Black Sheep’s issued and outstanding common shares.

Feel Foods CEO David Greenway said in a statement: “We are on a mission to transform plant-based food, with no compromises on taste or quality while reducing global environmental impact.

“Together, by shifting our collective approach to food, we can improve the health of our World, the lives of animals, and preserve valuable resources for generations to come.”

Asian American food brand immi has secured $3.8 million in a seed round.

Siddhi Capital led the round, along with a multitude of participants. Palm Tree Crew, Constellation Capital, Animal Capital, and actor Patrick Schwarzenegger are some of those who participated.

Immi intends to use the capital to accelerate manufacturing and production. According to co-founder Kevin Chanthasiriphan, this will allow the company to ‘bring new product innovation to our customers in rapid succession’.

Desserto, which crafts animal-free cactus leather, has teamed up with the BMW Startup Garage program.

Together they presented a new material, called Deserttex, at the IAA Mobility Expo in Munich. The cactus biomaterial can be applied to vehicle seating and panels.

The partnership aligns with BMW’s goal to significantly cut its carbon emissions by 2030.

Deserttex production requires less water and energy than animal-based leather, according to the Desserto website. It adds that Deserttex’s acres sequester more than 8,100 tons of CO2 every year.

Meatless Farm teams up with Equinom to boost protein content

Meatless Farm will incorporate Equinom’s non-GMO pea protein into its products, boosting protein content by up to 50 percent.

“The higher protein content of our products will help achieve our mission to help people reduce their meat consumption by providing credible plant-based swaps for meat that are accessible and still taste great,” Morten Toft Bech, Founder of Meatless Farm, said to Vegconomist.

“Ultimately, a better seed makes better peas for us to create more nutritious and delicious plant-based food that is kinder to our planet.”

Sonae – a multinational company managing an extensive investment portfolio – has acquired a majority stake in Claybell for around £64 million.

Sonae now holds 95.4 percent of the share capital – the Gosh! team has the remaining minority stake.

Gosh! had a normalized turnover of £22 million for the year ending in May 2021, FoodBev Media reports.

Vegan meat brand Next Meats has announced it will be the first to open a plant-based yakiniku meat production facility in Singapore.

The facility will provide meat-free products locally and to Malaysia and Indonesia.

“We have successfully established presence in the Japanese market with our alternative yakiniku meats and are now pushing ahead with our global ambitions,” said Next Meats’ CEO Hideyuki Sasaki, per FoodBev Media.

He continued: “Singapore, with her robust infrastructure and innovation culture, makes an ideal stronghold for us. We look forward to coming up with new products that excite the palate as well as drive food sustainability in Southeast Asia.”

The new plant-based yakiniku meat facility is slated to open in the last quarter of 2021.

The consumer goods company hopes the investment will boost its presence in the US, where Arctic Fox is growingly popular.

An Argentinian plant-based startup has reeled in $3 million in a recent funding round.

Called Tomorrow Foods, the company said it will use the capital to build its product portfolio and to expand across Latin America.

The company’s goal is for other food businesses to use its ingredients to develop their own recipes and products.

Matías Peire of Grid Exponential, which led the recent funding round, spoke to Bloomberg Línea about the move.

Peire said: “[Tomorrow Foods’] great capacity for execution confirmed they were a great team and allowed us to renew our bet by taking part in this new round. Latin America needs companies like Tomorrow Foods, with great ambition to change the food industry forever.”