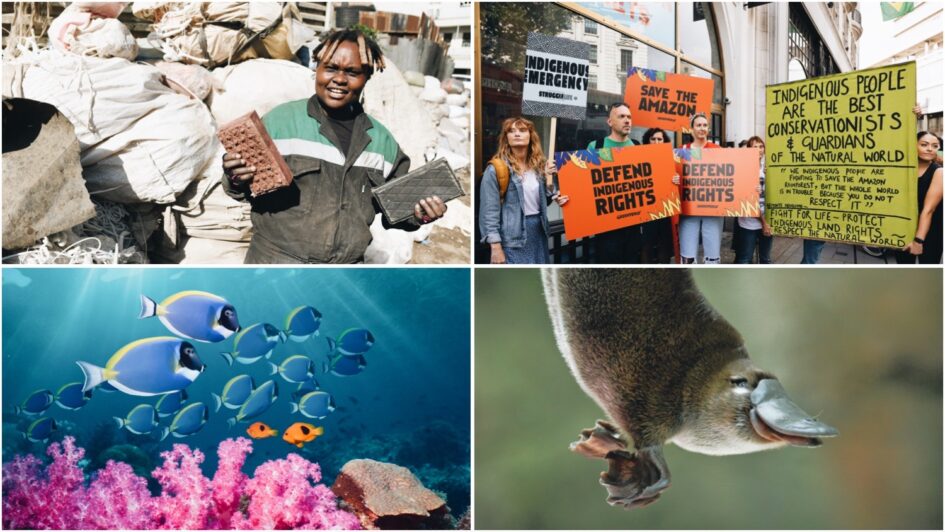 From droughts and wildfires to flooding and pollution, it’s been another hard week for the planet. But it’s not all bad news. Plastic pollution solutions are increasingly innovative, platypus are back in Royal National Park, and a new report shows the power of Indigenous resistance. Here’s this week’s positive environmental news.

This Kenyan company is turning plastic waste into bricks

The good news: Gjenge Makers in Nairobi, Kenya, is turning waste plastic into hard-wearing bricks, an innovative solution to plastic pollution. Speaking to Reuters earlier this year, founder Nzambi Matee explained that the company’s product is five to seven times more durable than concrete. So far, Gjenge Makers has recycled more than 20 tonnes of plastic while creating job opportunities for young people.

The impact: The factory produces approximately 1,500 bricks per day, meaning less pollution from new brick creation in addition to the reduction of plastic in the environment. Matee said that she hopes to add another production line to triple capacity before the end of 2021 and that she originally set up the business to help solve the plastic crisis after waiting for the government to do so. “I was tired of being on the sidelines,” she said.

Did you know: Plastic waste is a huge problem, and the COVID-19 pandemic has only made things worse. While the need for hygienic, single-use supplies and masks has been inescapable, individuals and organizations are finding innovative new ways to recycle and process the excess waste. Kenya has struggled with plastic pollution as much as any country, but earlier this year UNEP highlighted trailblazing national efforts to protect the environment.

How you can help: You can learn more about Gjenge Makers and its various successful plastic pollution solutions here. For similar companies, check out ByFusion and Ecobricks—an organization that describes how to make simple brick-style items with everyday plastic waste. Read LIVEKINDLY’s guide to microplastics here and learn about bringing a zero-waste ethos into your home here.

The good news: Australia’s oldest national park is reintroducing the platypus after nearly 50 years of absence. The University of New South Wales, the WWF, Taronga Zoo, and the New South Wales government are collaborating on the effort, which could see the unique, egg-laying mammals return to Royal National Park as early as 2022.

The impact: As reported by HuffPost, the animals’ reintroduction is highly dependent on scientists finding suitable homes, near deep pools of water, with high banks for burrowing. But there have been several successful relocation projects in Australia already, indicating that the animals should be able to survive—and thrive—in the Royal National Park.

Platypus are important freshwater predators, and studies indicate that climate change, habitat loss, and hunting have had a much more significant negative impact on their populations than previously thought. In 2016, the IUCN listed the animal as near-threatened.

Did you know: The platypus is one of the last remaining monotremes (egg-laying mammals) in the world. It has a fascinating appearance, with a beaver-like tail and a long, billed face like a duck. The oldest discovered fossil of the modern platypus dates back to the Quaternary period, around 100,000 years ago. Important note: young platypus are called puggles. Yes, really.

How you can help: Learn more about the platypus from the Australian Conservation Foundation, the WWF, and the Australian Platypus Conservancy. You can also “adopt” a platypus through either the Wildlife Preservation Society of Queensland or the WWF here.

Indigenous resistance has prevented at least 25% of North American emissions

The good news: The Indigenous Environmental Network (IEN) just published a report that reveals the huge positive impact of Indigenous resistance on the environment. According to the report, Indigenous-led opposition to 21 different fossil fuel projects in the U.S. and Canada has slashed the countries’ carbon emissions by at least 25 percent.

The impact: The report’s publication follows the belated addition of Indigenous organizations to the IUCN, a story included in the last positive climate news roundup. Despite shocking state oppression and the serious risks that face Indigenous activists, they continue to have a disproportionate and overwhelmingly positive impact. “The ultimate hope of the report was to show folks that we are winning, and we can win,” study co-author Dallas Goldtooth told Grist.

Did you know: The 24 percent reduction in North American emissions is equivalent to approximately 400 new coal-fired plants or 345 million passenger vehicles. That’s more plants and vehicles than are currently in operation. Furthermore, these figures knowingly underestimate total indigenous resistance by focusing on just the most iconic projects.

How you can help: You can support the IEN here and Oil Change International here, both of which helped create the new report. Learn more about Indigenous resistance and “the big picture behind pipeline protests” from Cultural Survival here. Learn more about ongoing Indigenous frontline fights on page eight of the IEN report here.

This Bay Area designer is 3D printing his own coral

The good news: Alex Schofield, a Bay Area design technologist, is creating coral skeletons through his workshop Objects and Ideograms. He uses 3D printing to manufacture complicated calcium carbonate structures (the building blocks of coral) in order to encourage new natural coral growth in the ocean.

The impact: Schofield has attached his homemade coral to CAA and Buoyant Technology’s Float Lab, a “resilient coastal infrastructure” prototype deployed in the San Francisco Bay. The Float Lab is a floating research platform, and Schofield’s coral has already provided a home to crabs, oysters, algae, and various other microorganisms.

Did you know: Coral reefs are technically animals, not plants, and approximately 25 percent of all marine species live on or around their complex structures. Reefs protect the shoreline and even provide jobs to coastal communities. However, coral reefs urgently need our help. Over the last 30 years, approximately 25 percent of the world’s coral has been lost to global heating, overfishing, and pollution. The warmer the sea gets, the more coral will die.

How you can help: You can help protect coral reefs by making small lifestyle changes that minimize your impact on climate change, the environment, and specifically the ocean. These include effective recycling, keeping your travel as sustainable as possible, saving energy, and eating less meat, fish, and other animal products. But as ever, the responsibility rests with world governments and industry leaders to mitigate climate change and protect the planet.

You can also donate to organizations such as the Coral Reef Alliance, the Reef World Foundation, and Ocean Conservation Trust.

The USDA is investing $50 million in racial justice and sustainability

The good news: The USDA plans to invest up to $50 million to support historically underserved farmers and ranchers who incorporate “climate-smart” agriculture and forestry techniques. “Racial Justice and Equity Conservation Cooperative Agreements” are available to socially disadvantaged, limited resource, veteran, and beginner farmers.

The impact: This investment could potentially improve soil health, water quality, and provide much-needed habitats for regional and national species of concern. The USDA hopes it will improve both the economic and environmental performance of agricultural land, while supporting producers and workers who have thus far been inexcusably underserved.

Did you know: The USDA itself is responsible for much of the historic and ongoing inequality in the agricultural sector, something that President Joe Biden and his administration are trying to rectify alongside a national push for sustainable and environmentally-friendly farming techniques.

Tina Johnson, the director of the National Black Environmental Justice Network (NBEJN) said of Biden’s efforts: “[By] putting into place equitable and justice policies we ensure that support and opportunities exist for everyone and not just a designated few.”

How you can help: Eating more local, organic, and socially conscious food is just one way to support sustainable agriculture. You can learn more about the intersection of climate change and land equity here, including information about sustainable and Black-led farming in the U.S. Discuss the USDA’s agreements with friends and family and encourage people to apply.

Are Diamonds Vegan? These Conflict-Free Gems Are Made from Air Pollution

Herman Miller’s Aeron Chair Is Now Made With Reclaimed Plastic