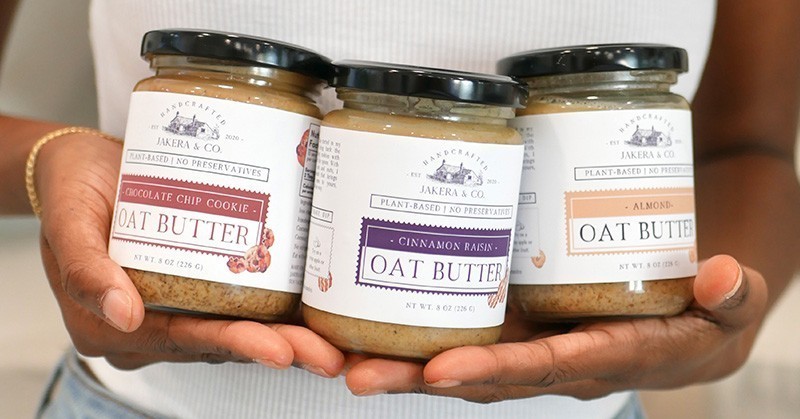 Peanut butter, what? With the expansion of nut butters over the last number of years to include almond, cashew, walnut, and every possible combination of all of them, it’s easy to get overwhelmed. But how many of them are made with organic, gluten-free oats for a lighter result? Enter Jakera & Co: the popular Black-owned vegan oat butter brand that has just undergone a full rebranding and announced the launch of three new flavors of its spreadable oat butter.

After launching this past summer, Jakera & Co. (formerly Oat Butter Brand) was off to a wild and successful start. The brand sold 250 jars of its Cinnamon Maple Oat spreadable oat butter in under 12 hours.

Shortly after, the brand was selected as a recipient of the 2021 Visa She’s Next Black Women-Owned Business Grant, which gave them $10,000 in support as well as a coaching membership with IFundWomen—a company dedicated to supporting and assisting women-owned businesses. Owner Jakera Willis continued to raise money for the brand with a further partnership with IFundWomen, which led to the eventual relaunch. Jakera & Co. reemerged with new branding, a new formula, and three new flavors.

The new and improved oat butters are more spreadable, making them easier for customers to use on toast, baked goods, and fruit. The three new flavors are Cashew Chocolate Chip, Cashew Cinnamon Raisin, and Vanilla Almond. All three flavors are made with organic coconut oil and organic gluten-free oats.

The oat butters are best enjoyed as a spread on toast, as a dip for your favorite fruit, or (let’s be honest) simply with a spoon to be eaten straight out of the jar. The oat butters come in 8oz jars and retail for $12.99 on JakeraAndCo.com.

And if you’re still trying to come up with a holiday gift idea for someone special, the Oat Butter Sampler comes with one of each flavor for a slight discount. Visit JakeraAndCo.com to browse the full selection and to place your orders.