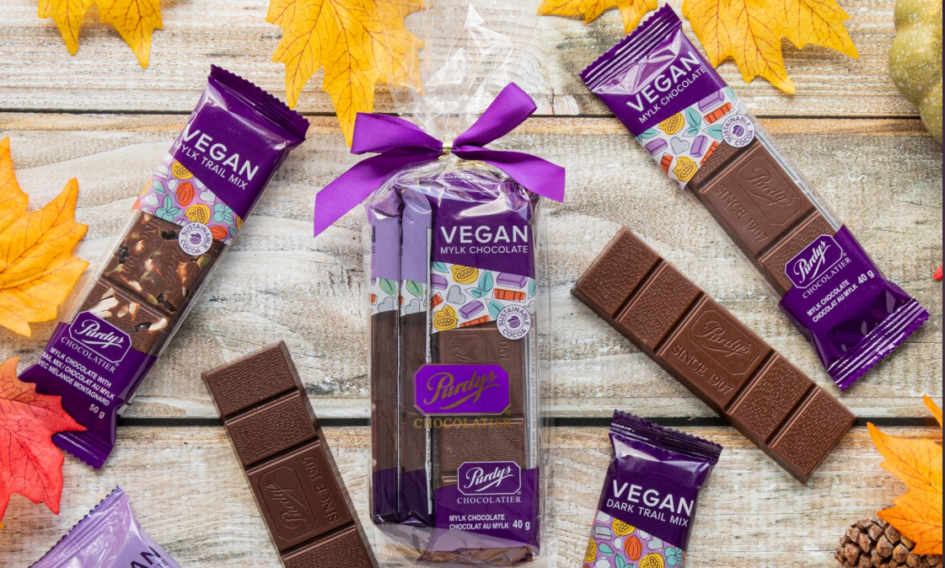 Canadian chocolatier Purdys as of late presented another line of vegan chocolate bars at its in excess of 75 locations across the nation. The new 50-gram vegan bar line incorporates three assortments: Vegan Mylk Chocolate, Vegan Mylk Trail Mix, and Vegan Dark Trail Mix. Both bars incorporate pumpkin seeds, almonds, raisins, and dried cranberries. The vegan bars are sold independently or as a component of a six-piece grouped bag.

Purdys made a vegan variant of its dairy-based chocolate by utilizing rice milk powder rather than dairy milk. For its vegan dark chocolate, they sourced vegan beet sugar. What’s more, for the entirety of its vegan products, Purdys utilizes an assigned vegan molding and packaging line.

Vegan Chocolate For Everybody

The new vegan line adds to Purdys’ now existing and exceptionally famous Vegan Dark Chocolate Bar and was presented in light of the fact that the corporation perceived that clients’ dietary inclinations and necessities keep on advancing after some time. Clients are picking dairy-free alternatives and are watching out for items that taste great, yet furnish them with an encounter they can feel good about. Purdys—which has been doing business since 1907—expects to offer various sorts of chocolates that address the issues of its assorted client base, and vegan chocolates are a piece of its advancement as a corporation.

As of late, significant chocolate and confectionery brands all throughout the planet have dispatched vegan alternatives of their famous chocolate products to fulfill the developing need for dairy-free choices. Recently, a vegan form of the notorious KitKat bar started advancing toward store racks. Produced using a blend of vegan chocolate and vegan wafer fingers, the new KitKat V was made by Nestlé’s innovative workgroup in York, United Kingdom.

Kim Kardashian was one of the first celebrity that tried the new vegan KitKat bar who got a customized box of vegan “KimKat” bars in June. The KitKat V bars at first dispatched in the United Kingdom, and then Estonia, Poland, Latvia, Lithuania, Brazil, and different locales—yet not the US, tragically.