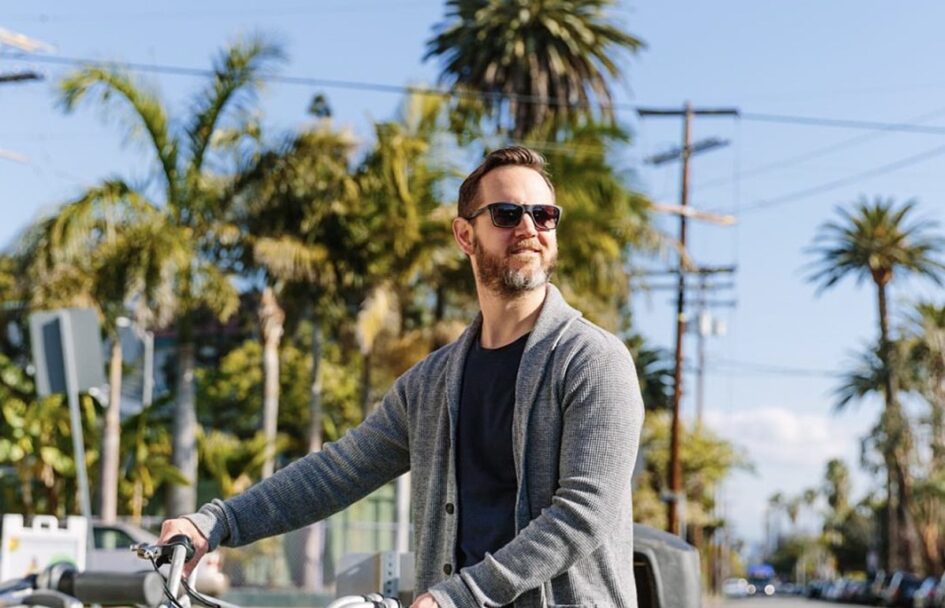 Russell James is known as ‘The Raw Chef’ in the UK, where he teaches his many followers how to make delicious food that is healthy. Suffering from debilitating acne in his teens, he discovered the power of raw food to not only reversed his acne but teach him the power of food as medicine, setting him off on a new career path.

James went on to become a leading authority on gourmet raw meals, teaching how to eat this way in both Britain and America. Now James explains that he takes a more balanced approach to food that has not only kept his skin clear but helped him to lose weight and get fitter and lose the “Dad bod.” He shared his story and expert tips with The Beet.

Raw food and juices cleared my acne in seven days

James’ first job aged 16 was at Burger King, and while he enjoyed the perks of the job like free food, he developed a bad case of acne. By his twenties, he hadn’t grown out of it (as despite trying everything – Accutane, skin creams, antibiotics –and nothing would clear it, but his skin became itchy, dry and red.

Acne affected his confidence and social life, he explains. ”I was very self-conscious of it at that age, and would just not go out,” adding that he also avoided talking to anyone about it.

If bad nutrition had caused acne, perhaps good nutrition could help fix it, he thought. After saving up his salary from a grocery store job, he managed to afford a 2-week retreat in Thailand that involved detoxing with raw food, fiber-filled juices, and coffee enemas. After seven days, he was amazed to find that his acne cleared up (it improved within three to four days) and James realized the power of food. He went on to repeat this three more times and started taking raw food classes, which started his journey to becoming The Raw Chef.

How can raw food heal acne?

Russell believes that a key reason raw food cleared up his acne is due to the connection between the liver and the skin. ”Everybody’s different but I would say if there is commonality it’s to do with the liver”

Even now, he uses herbals such as milk thistle, maca, and Reishi mushrooms to support his liver and skin health.

Plant foods support the liver because they contain the vitamins, minerals, and other plant compounds that your liver needs to process toxins safely and effectively. Additionally, plant foods contain fiber, which nourishes beneficial bacteria in the gut and keeps your digestive system moving. When your body excretes waste it helps reduce toxins from the food we eat.

An extra benefit of eating raw food is that it maintains the nutrients such as vitamins, antioxidants, enzymes, and phytochemicals intact that usually get destroyed by cooking.

Tips and pitfalls when starting a raw food diet

The main pitfall that James sees when people start a raw food diet is that they believe they have to be 100 percent raw from day one, which may suit people who are excited by a complete kitchen overhaul – and go out and purchase a dehydrator, a blender, a sprouter, and new ingredients – but many people benefit from doing it more gradually.

”If you don’t know how to make raw food, it is a new skill, it’s not just like ‘I’m going to cook but without heat.’ It’s a completely new thing and you’ve got to give yourself time to learn’,’ he says.

Add in rather than take away.

James tells people that rather than just take everything out of your diet all at once, add raw ingredients, meals, and spreads into your repertoire. “Learn how to make fermented sour cream, for example, or to make one dish.”

At first, he ate a steady diet of kale salads as they were satisfying and easy to make, ”if you can shop for and learn to make three dishes without a recipe, all from memory, that’s a really good start,” he explains. However, if you’re having trouble digesting an ingredient such as raw kale (which makes some people feel bloated), lightly steam it. “Listen to your body and do what you need to do,” he advises. ”I got arrested by the raw food police when I gave an option to steam kale in a recipe. Everyone attacked me for not being a proper raw food chef” he says, ”but I like to inject a bit of real life into what I do.” Now he publishes a recipe of the week to help people add more ideas to their repertoire.

After 15 years of following a raw food diet, James realized his body needed something else and he started eating different kinds of foods, not all of them good. “By 2018 I’d cultivated early signs of a ”Dad bod.” He had heard the phrase ”eat like an adult” on a podcast, referring to not avoiding food groups and eating a balanced diet, and he started a website,  eatlikeanadult.com, to help people cook whole foods in a healthy way.

At the same time, James decided to get back in shape and embarked on a four-month body transformation with a personal trainer, eating a wide variety of whole foods (not strictly plant-based) and working out with weights three times a week. He shares his before and after pics on his website.

Food choices are personal and should not be judgmental

James believes in a non-judgmental stance about personal dietary choices and food, and he says he does not believe in demonizing certain foods or diets. He sees people going from one extreme diet to another, blaming themselves when their approach isn’t working – when really they should be listening to their bodies and do what’s right for them. ”We’re all so different, that often a prescribed diet can take us away from creating what would truly benefit us: A personalized diet based on whole foods and home cooking” he says.

People who’ve tried Russell’s raw food courses have experienced life-changing health benefits such as increased energy, and they credit the change to helping them take up running and having the stamina to play with their grandchildren. Raw food has helped some people experience less brain fog, and find relief from constipation, or achieve clear skin. In Russell’s experience, eating raw food feels “light, nourishing, and cleansing.”

”As long as you don’t throw the baby out with the bathwater, these [cooking] are skills that will last you for life” he says. James continues to teach Raw Chef online cooking classes, free courses, and offer recipes.

Diet is rarely offered as a treatment for acne, even though 50 million Americans suffer from acne each year, and nearly 85 percent of teenagers are affected by acne at some point, according to the American Academy of Dermatology (AAD). Acne can result in permanent scarring, poor self-image, depression, and anxiety. Doctors treat acne with topical treatments, antibiotics, and hormonal therapies.

The AAD doesn’t recommend any specific dietary changes but says there is emerging evidence that high glycemic index diets and dairy may play a part. There is very little research on the influence of diet on acne compared to the amount invested in research into drug treatment. However, some drugs to treat acne have been linked to depression and suicide.

Natural approaches such as dietary changes are worth trying for someone who is suffering the physical and psychological effects of acne.