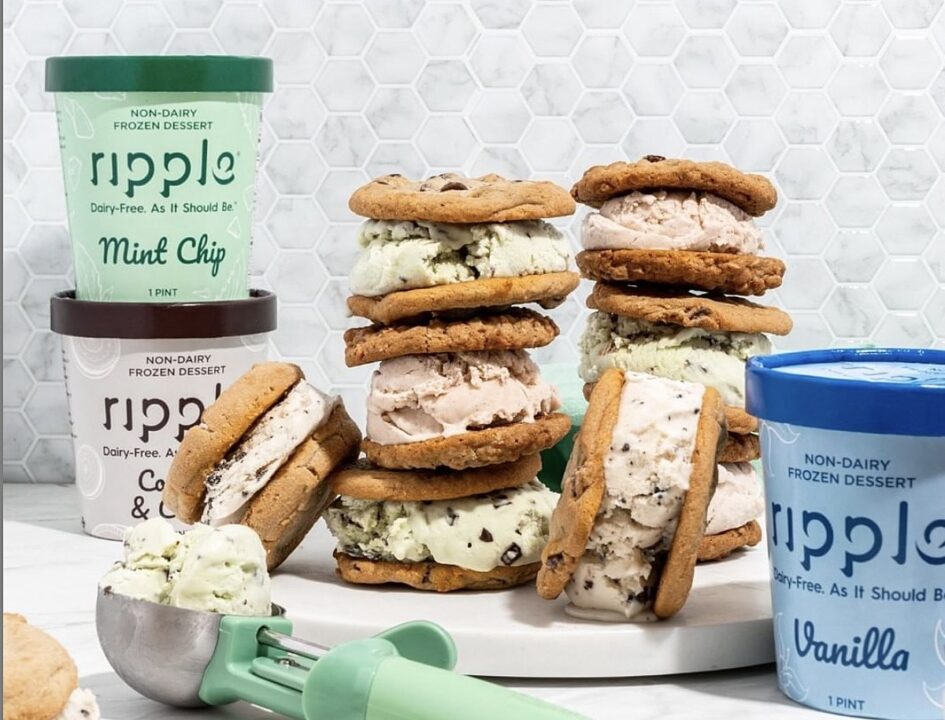 California-based Ripple Foods launched in 2016 to develop pea-based milk and has now secured a $60 million Series E funding round. The company announced that the investment package will be allocated to expand its plant-based milk production, aiming to both increase its commercial outreach and expand its product selection.

The innovative dairy alternative brand announced that the funding will also propel the company into other food categories, intending to create vegan cheese and even dairy-free soft serve. Led by Rage Capital, Ajax Strategies, and S2G Ventures, the investment package will help the rising dairy-free milk brand enter the growing plant-based milk industry.

“Our investment with Ripple supports its continued growth and success in the milk aisle and its upcoming innovation in new product categories,”, Managing Director of S2G Ventures Chuck Templeton said in a statement. “Ripple is a clear leader in plant-based dairy alternatives, and we are excited to support this team of proven industry veterans as they continue to scale the business.”

The plant-based company also debut a Ripple Kids pea milk product designed for children, claiming to be filled with all nutrients necessary for healthy development. The company claims that the new milk is Target and Whole Foods Market’s top product in that category.

“Ripple will continue to bring new benefits to the milk category, with the most recent example being our Ripple Kids refrigerated milk, which delivers 8 grams of protein in addition to DHA, choline, and prebiotics,” CEO of Ripple Foods Laura Flanagan told VegNews. “We will also be exploring several different categories where we can deliver no-compromise dairy alternatives including soft service ice cream.”

The company currently distributes its products nationwide across several food categories including yogurt, shakes, and half & half. The company also revealed its first pea-based ice cream last year, which is now available in Vanilla, Cinnamon Churro, Mint Chip, Cookies & Creme, and Chocolate flavors.

Ripple Foods products can be found at 20,000 grocery store locations across the United States. The company plans to expand outside of the commercial retail sector into wholesale and foodservice following this fundraising round. In 2020, the company already expanded its protein shakes into 7-Eleven stores and its pea milk to Costco. Costco offers a three-pack of 48-ounce bottles of the Ripple Original Plant-Based Milk for $8.99.

“Retailers love Ripple as much as consumers do because when a retailer adds Ripple to the shelf, it’s highly incremental to their category sales,” Flanagan said. “So we’ve seen tremendous success in grocery, and we’ll be using this fundraise to expand into other channels including club, convenience stores, and foodservice.”

The company highlights the health and environment of peas through its company’s platform. With animal agriculture in the hot seat, the innovative brand emphasizes that its yellow peas hold an extremely low environmental footprint, causing significantly less damage than conventional cow-based milk.

“Peas are a very sustainable crop that is broadly available in the US [and] that is high in protein,” Flanagan said. “The downside of peas [is] their taste, particularly in a milk application, but that’s where our technology focuses – on getting highly pure pea protein, and pure protein has no flavor.”

The pea-based milk product is designed to enhance the nutritional value of milk products across the board. Ripple showcases a plant-based milk product that contains 80 percent less saturated fat, half the sugar, and more calcium and vitamin D than traditional dairy products.

With the funding, the company plans to market its nutritional and environmental benefits to becoming a frontrunner in the plant-based milk category, which according to SPINS data from earlier this year grew 20 percent in 2020. Pea milk is a relatively new sector of the plant-based milk market, but investors have recognized its potential in the overall growing market.